I can say with some certainty that you wouldn’t want to meet Lamia. Why not? John William Waterhouse has depicted her as a pretty lady sitting pensively beside a lake maybe checking out her hair in the reflection. There’s a lot of detail in this image (Waterhouse adopted the style of the pre-Raphelites, so called because they championed a return to art pre Raphael who they felt led the charge towards art becoming less precise and less detailed) and it’s all very lovely, so much so that it might take a while to notice that the beautiful blue and gold cloth on her lap is in fact a snake skin and that there are a couple of snakes either side of her too. 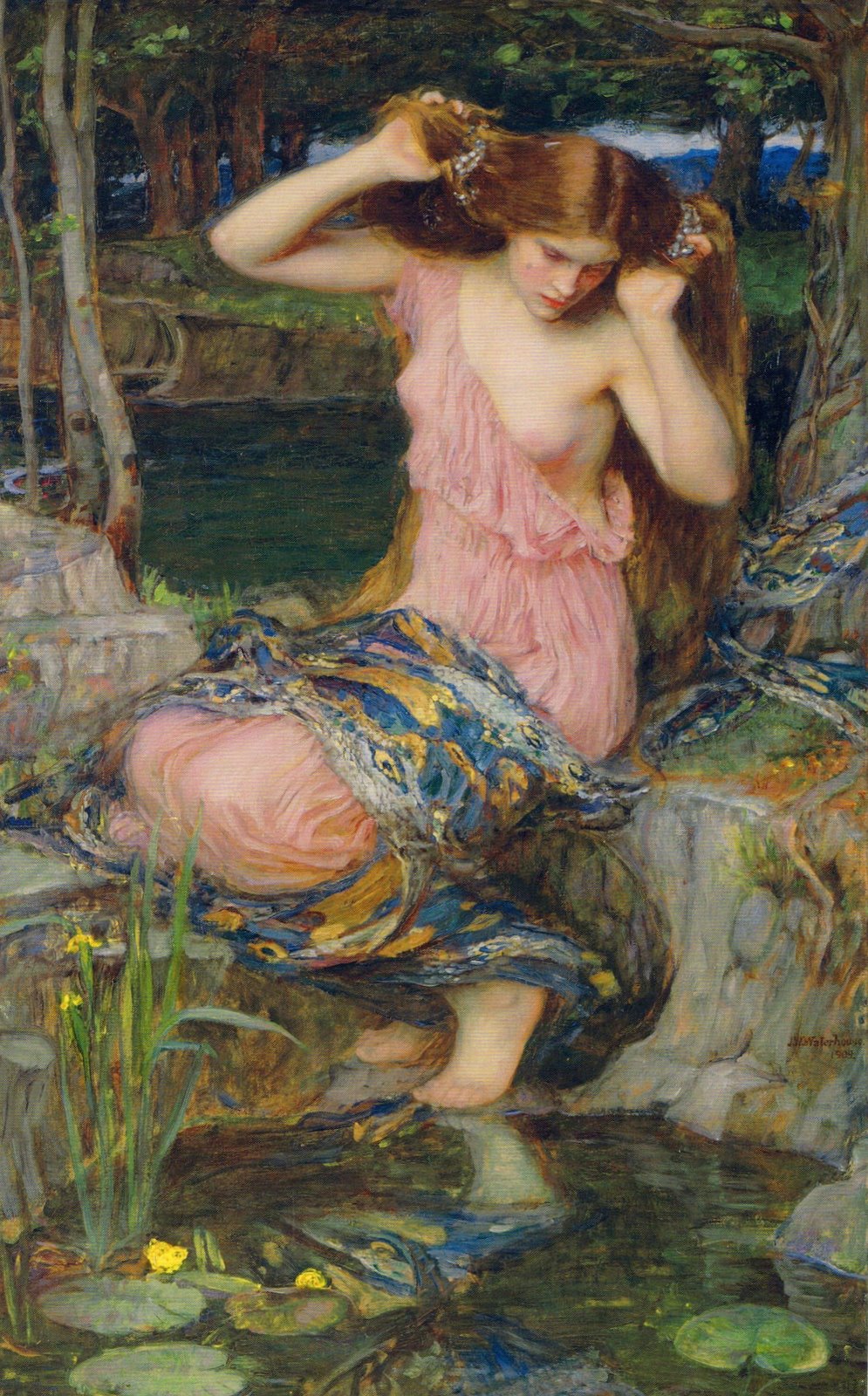 What are the snakes all about? That’s a fair question. Waterhouse’s painting references a poem by Keats.

This beautiful woman, Lamia, starts the poem as a snake. Ah ha! She persuades Hermes to return her to human form and in exchange she will reveal the hiding place of a nymph with whom he’s fallen madly in love. The clue to whether the love is reciprocated is in the fact that the nymph has hidden from him.

Sisterly love? Very much not!

Lamia herself has her eye on a delicious fellow and, as the beautiful woman she has been transformed into, she seduces him and they live a solitary life together until one day he says that they really ought to marry.

Lamia doesn’t go a bundle on this but she agrees as long as the philosopher Apollonius isn’t invited. What did he ever do to her? Nothing but she knows that he will recognise her as the serpent she truly is.

Apollonius pitches up anyway, reveals her as a serpent, ruins the wedding feast and she vanishes and her new husband dies. A bad marriage that didn’t even really begin!

Here’s another painting by Waterhouse in which she’s seen seducing the knight. Again, the devil is in the detail; notice the snake at the bottom of the work and the way Lamia is rocking snake skin accessories!

So where did Keats get his inspiration from?

Disappointingly I can’t find a painting of any part of the Lamia story from Greek mythology – I suppose that’s because it’s relatively unknown, but I did find examples such as the two below on scienceinfo.net. 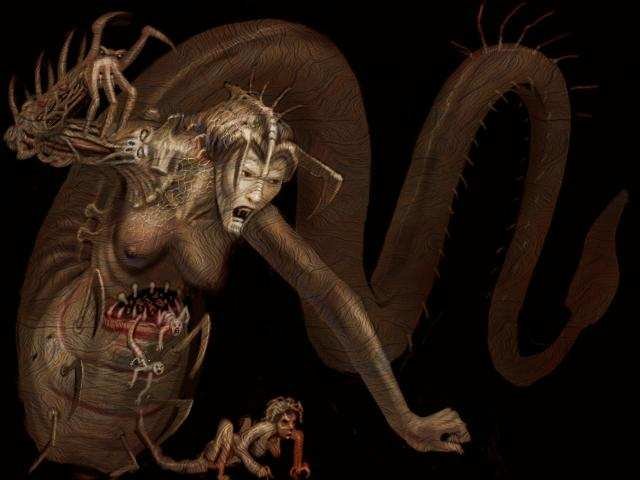 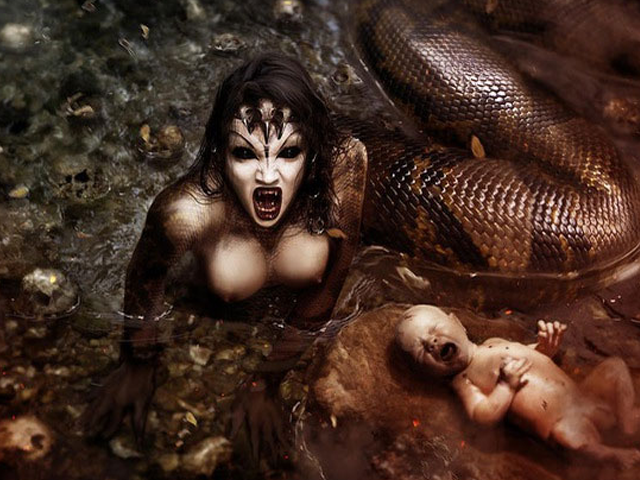 So now we have a snake and babies involved. The Greeks really knew how to tell a good story – and with this one they managed to create one that is still used to threaten naughty children today in some countries.

Lamia started life in many of the tales as the beautiful Queen of Libya. In some she is also the daughter of the sea god Poseidon and a nymph.

Unfortunately for Lamia she caught the eye of Zeus and they had a rapturous affair, even though she’s his niece. What happens when you get jiggy with Zeus? There are offspring. Always. What also happens when you have an affair with Zeus? His wife finds out and exacts retribution. Not on her husband but on the object of his affections, although in this case, Zeus must have been pretty devastated too because Hera killed the children he had with Lamia. Well, except one possible daughter Scylla, who became a six headed monster who killed sailors. I say ‘possible’ because her parentage is uncertain. Anyway, the grief destroyed Lamia and not only did she also turn into a monster, but she completely flipped and began to kill any child she could lay her hands on. Some say that she even ate them.

Some of you, even as I speak, might be wondering why no plan was hatched to kill the crazy baby murderess. All you’d have to do is wait until she fell asleep, right? That might have been a good plan BUT in some versions of the story, Hera wasn’t done with killing her children and making Lamia mad. Oh no, the coup de grace was that she caused Lamia to be sleepless by preventing her from ever being able to close her eyes. Luckily for Lamia the ever practical Zeus was on hand with a remedy for that. He made her eyes removable so that she could take them out when she needed rest.

So now Lamia exists in mythology as a vampiric child killer and, largely thanks to Keats, as a dangerous shapeshifting seducer of men. 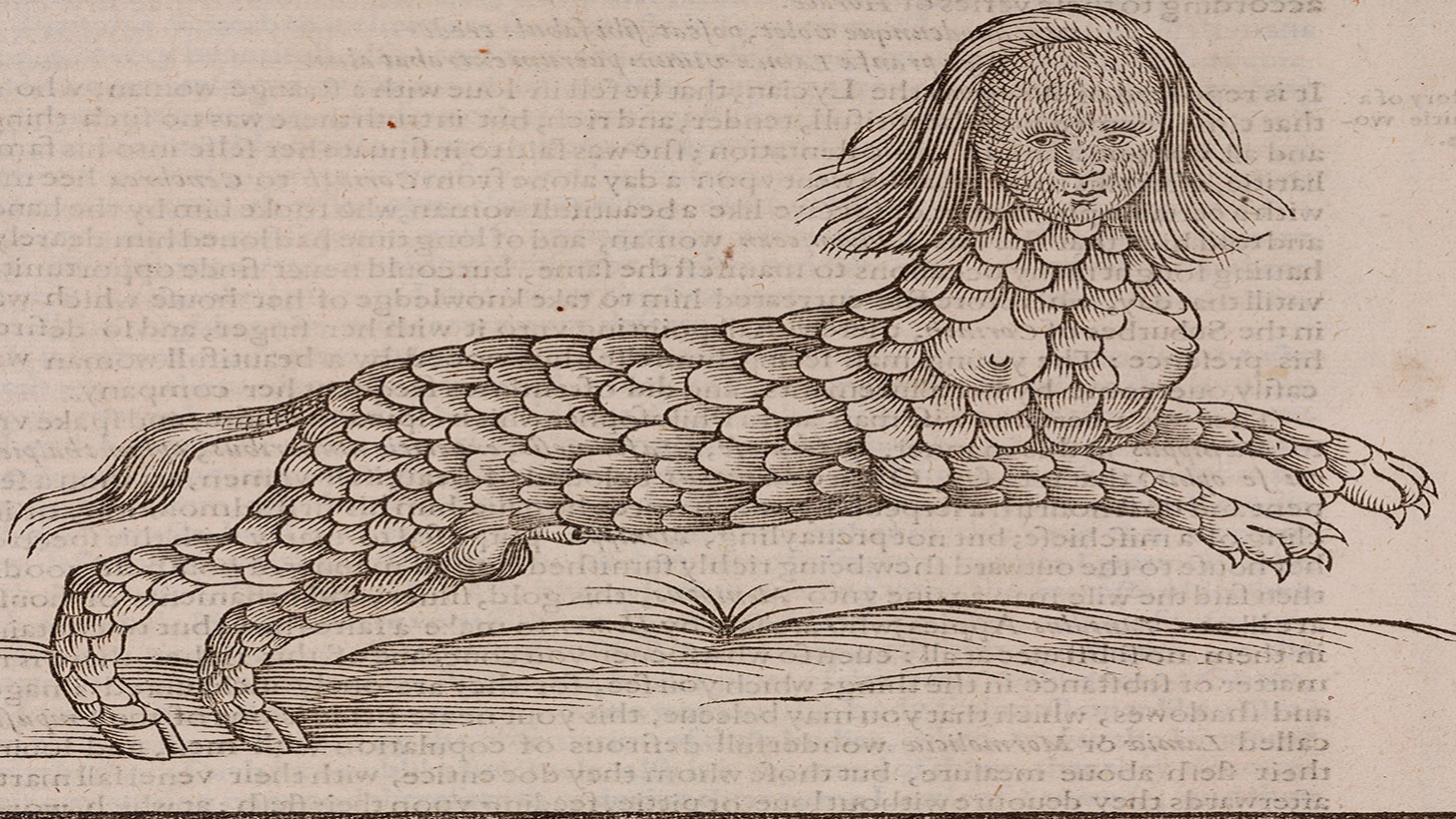 Oh, she was possibly also inspiration for this creature to be found in Edward Topsell’s 17th century book, The History of Four-Footed Beasts. The beast which has the head and breasts of a woman, forelegs like a bear, hindlegs like a goat and the body of a serpent but with scales like a dragon (snakes and dragons have often been interchangeable), they preyed on humans and sucked the blood of children.

They probably ruin your hardy perennials too so I’d say they wouldn’t be a welcome visitor. All that from a roll in the hay with Zeus!