In ‘Maid in Marble’, my video introducing the art of Classical Antiquity, an excited young lady announces that the statue she’s modelling her head for is probably that of Themis – the goddess of law and order. 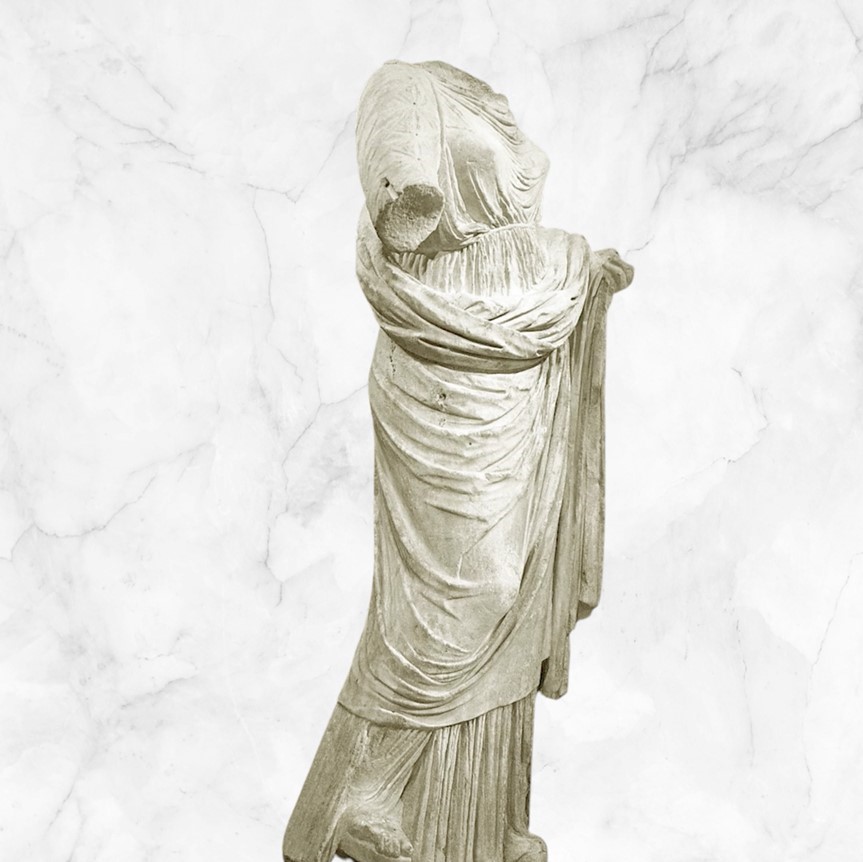 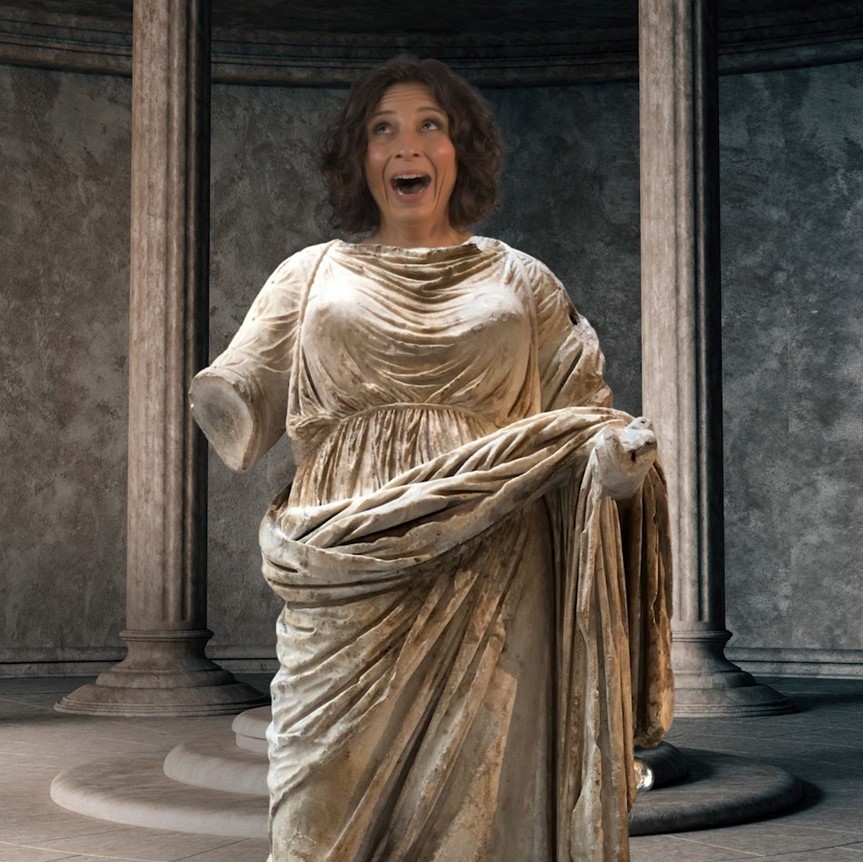 Still from Maid in Marble, 2021, Beyond the Palette

Themis is one of the most ancient of all the goddesses; being one of 12 offspring between Uranus and Gaia, she is part of the Second Order of divine beings that became known as the Titans.

Here are her parents in the happy days of their marriage as part of a floor mosaic from the 3rd century A.D. 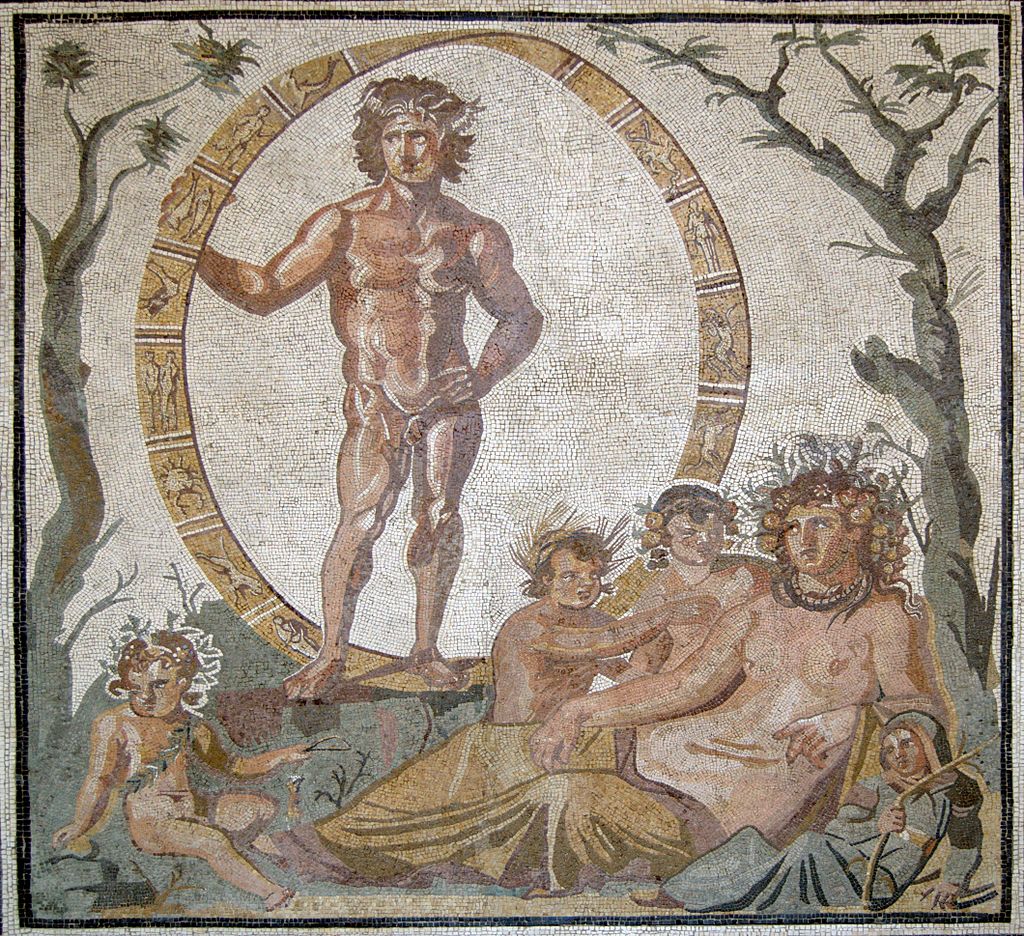 Unfortunately things turned sour and Gaia decided to overthrow Uranus, and asked her kids, one by one if they would help her.

So, she called on Themis, who wisely counselled her mother to forget the crazy idea of usurping Uranus. Gaia listened carefully to this wise counsel and ignored it.

Her brother, Cronos, wasn’t quite as wise. He overthrew Uranus by castrating him and throwing his genitals into the sea. Which is how Venus was born.*

And then, of course, Cronos himself was overturned by Zeus.*

Whilst all this was going on, Themis was earning herself a great reputation for being just, wise and a bit of a prophet. When the Oracle of Delphi prophesised, she was either possessed by Apollo, Themis or Gaia. Or perhaps all three.  I would always hope for Themis. By the way, a little gem curtesy of Stephen Fry: the Greek for ‘divine possession’ is enthusiasmos – enthusiasm. To be enthused or enthusiastic is to be ‘engodded’, to be divinely inspired.

Here she is seated on the Delphic tripod, holding a cup in one hand and a sprig of laurel in the other completely confusing King Aegeas. He was so baffled by her prophesy that he had to go to his mate to ask him to explain. At which point his mate got him drunk and had him seduced by his daughter (who later gave birth to Theseus). That’s another rather complicated story. 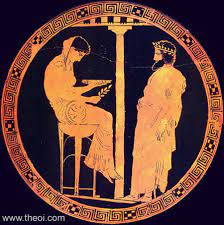 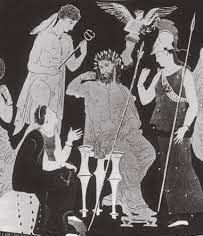 Here is Themis again, this time offering counsel to Zeus who by now is King of the gods.

You’ll notice it’s quite a cosy gathering. Actually, to some extent, this is a nice family gathering. In the centre is Zeus with Themis seated to the far left, then we have Hermes and to the other side of Zeus a little Nike or winged messenger and Athena.

Athena is Zeus’s daughter by his first wife, Metis. Themis is Zeus’s aunty on both sides; she is the sister of his parents, Cronos and Rhea (!) but at this moment she’s also possibly his wife. I say possibly not because they may not have married, they did, but who knows where we are in the crazy life of Zeus at this point other than he’s fathered Athena? He went on to marry Mnemosyne with whom he had the nine muses, and Leto the demure goddess of motherhood before he settled for the deranged and jealous Hera, who was also his sister. I bet family gatherings were excellent.

Back to his brief marriage to Themis. It might be the most normal thing Zeus ever did! They became close when he repeatedly called on her to help him make wise decisions about the conduct of men and gods and soon she was synonymous with the idea of divine law and Zeus couldn’t live without her in his life. Until he could and moved on!

Naturally they had offspring. Two sets of triplets in fact. The Horai and the Moirai.

The Horai were the goddesses of the seasons. At some point another one joined them. They were pretty cool ladies who oversaw the smooth running of time.

The Moirai on the other hand are often depicted as witchy type characters who personified a person’s fate. ‘Moirai’ means ‘parts’ or ‘shares’ so they dished out what portion of life an individual could have. One spun the golden tread, another measured it out and the final Moirai cut it. The fate of man wasn’t inflexible, however. If Zeus decided to play with that tread that was his prerogative.

So Themis was always working away in the background basically doing good work. She didn’t get naked and nor did she do anything grandiose or outrageous, therefore artists mostly weren’t interested in her narrative, but of course as the embodiment of justice and law and order, she is everywhere.

The Romans called her Justitia, and she became the only one of the cardinal virtues to have a signature look in ancient art. Scales, usually a sword and often a blindfold to signify her impartiality were standard attributes.

Occasionally, however, she was depicted with other attributes as in this work by Raphael. 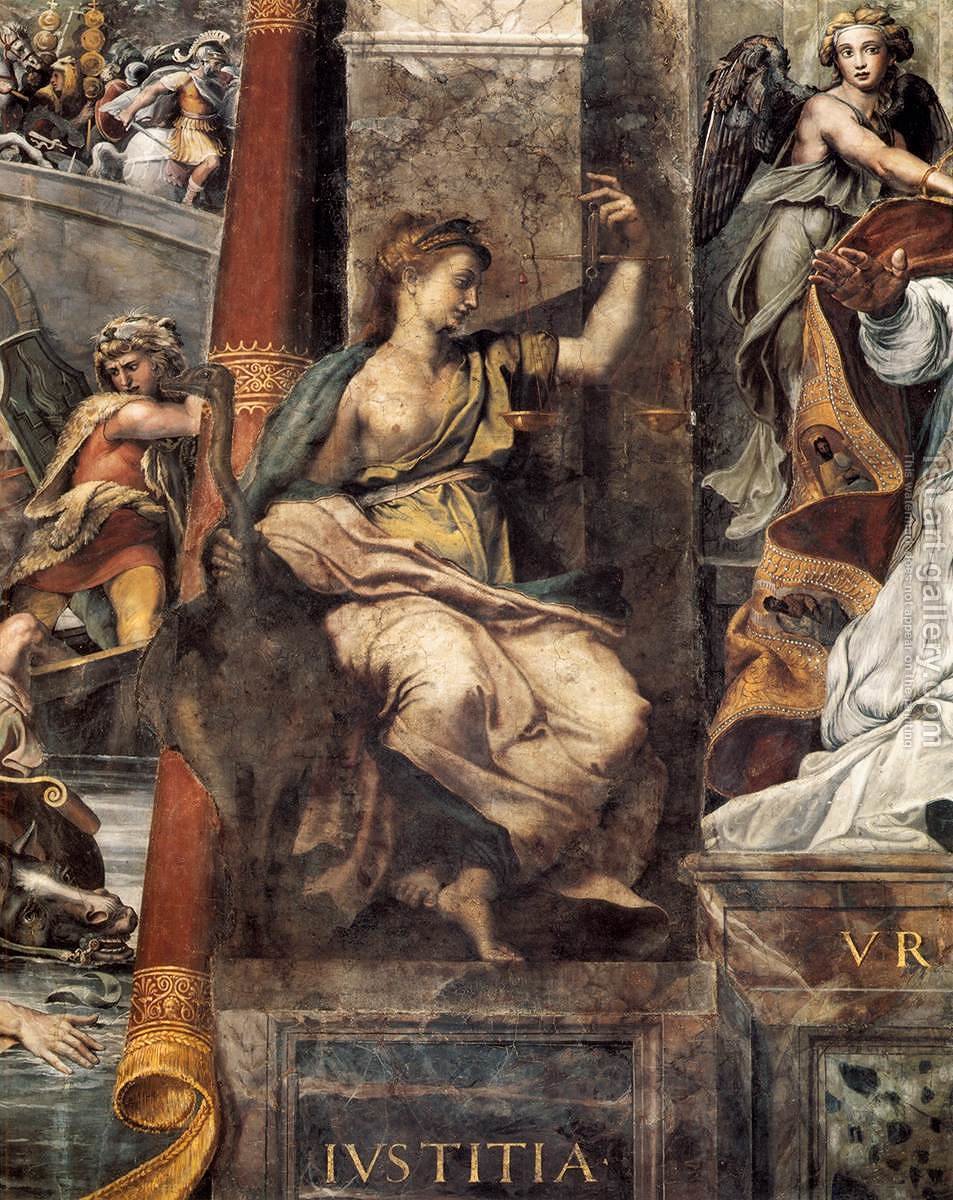 The ostrich was known in the Renaissance for its odd dietary habits (eating anything, including metal) and was sometimes linked with the sin of gluttony. That’s not, I don’t think, what Raphael was saying. The fact that it really did eat ANYTHING also imbued it with the fine quality of endurance and it became an emblem of justice during the Renaissance because, according to the famous 16th century iconographer, Cesare Ripa, “the ostrich ruminates its food as Justice should the testimony put before her”. Apparently they also have very evenly distributed feathers which is just the way that the law should be imparted. That’s according to the 5th century author Horapollo.

On the other hand they put their heads in the ground and so could be symbols of ignorance.

This work was only found a few years ago in 2017 during a fresco restoration. It’s one of only two figures that Raphael painted using a new technique with oil paints.