Ah, the Greek Symposium. All politics and philosophy you might think. Er, no. The ancient Greeks indulged in drinking rituals that would rival anything the boys on a rugby tour might throw at you. And I’d say that they even upped the ante! 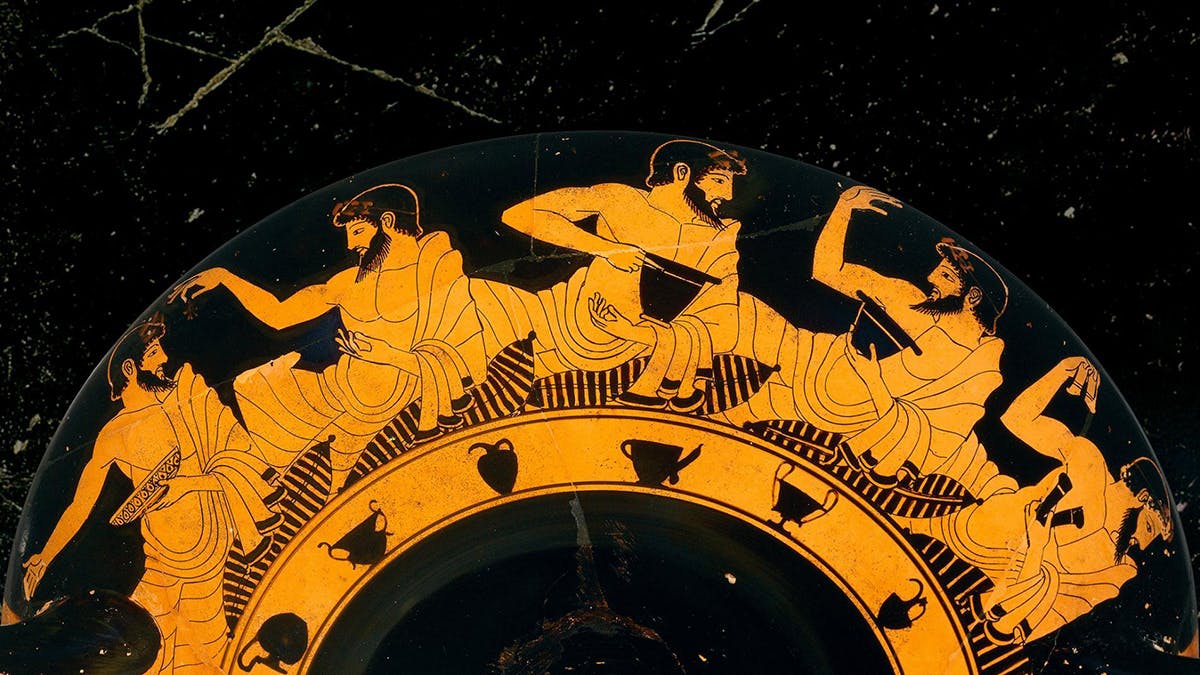 The evenings started off very respectably with a banquet at which it is entirely possible that alcohol wasn’t served at all. The ancient Greeks had clearly learnt the art of lining their stomachs. After dinner, the men (yes, it was a bit of a boy’s club) had their hands washed by slaves, the floor was swept (by slaves), the room splashed with perfume (by slaves) and as if those slaves weren’t busy enough already, they often had to make time to adorn the men with garlands.

At the beginning of this process, one incredibly important ritual had to take place; there would be a number of toasts to divinities; one imagines that Bacchus was always included. No one could decline to participate and everyone had to keep pace.

After these toasts, the wine would be diluted with water in a vessel known as a krater. 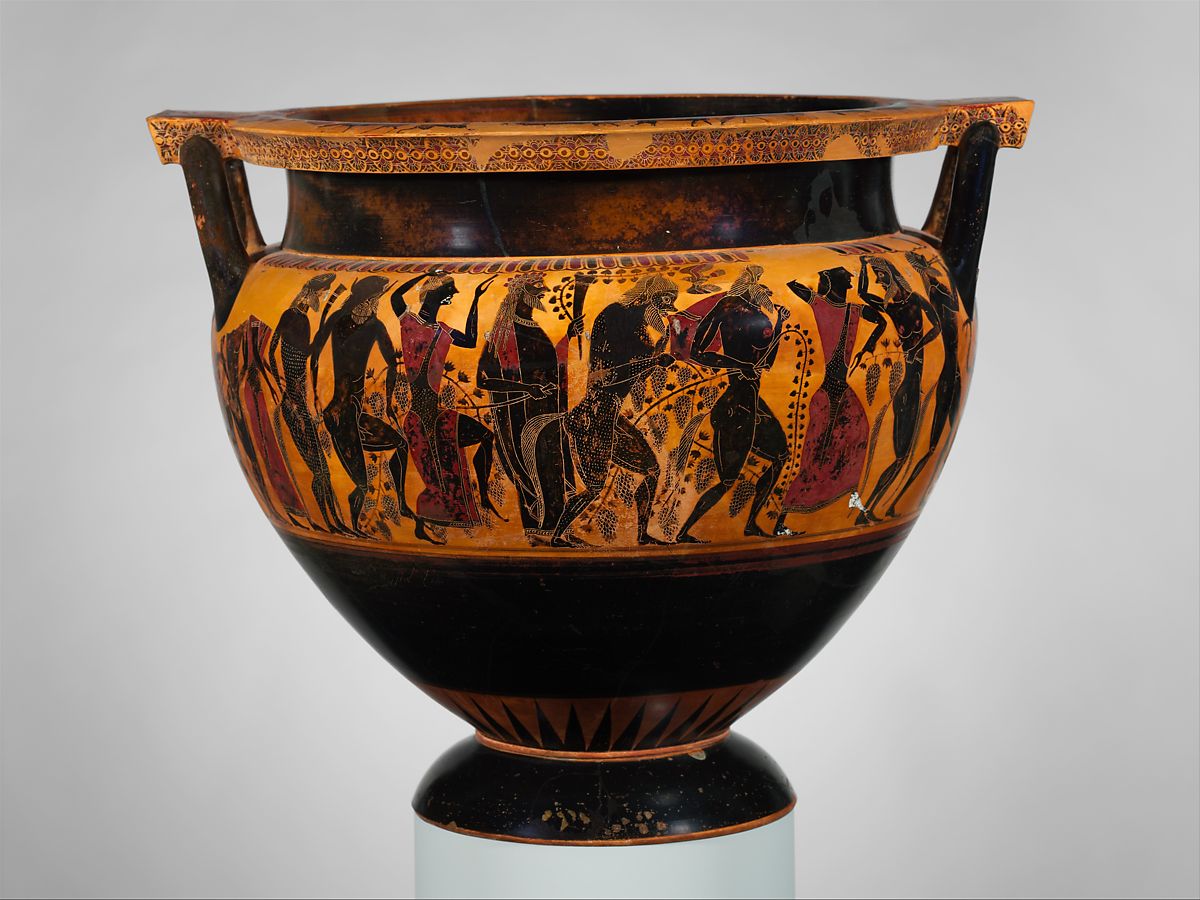 The banqueters had to decide what percentage of water to put in and anything less than 50% was considered dangerous. I love the thought of the wrangles between those who wanted more or less water – I’m thinking punishments may have been doled out for anyone considered too conservative? Or am I getting carried away by my limited knowledge of ferocious rugby drinking sessions? Anyway, once mixed, the ‘fun’ would begin. Each guest would have to drink the same amount, with everyone else, so they’d choose the size of the cup that would be used and off they would go round after round. As they drank, each man had to take a turn singing a song. 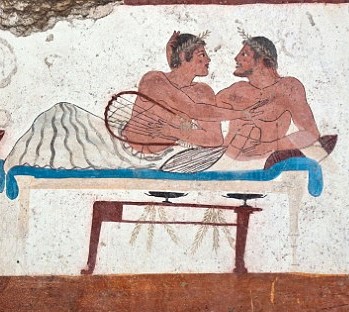 Symposium scene from the Tomb of the Diver necropolis frescoes in Paestum, ca. 475 B.C., National Archaeological Museum of Paestum, Italy

Some would be little love songs, and the performer might accompany himself on a lyre.

Here’s one such fellow, although I think he might be more interested in the bearded gentleman he’s sharing a couch with. This is a fresco from a rare Greek wall painting that has survived from circa 475 BC. It’s called the Tomb of the Diver (another fresco depicts a man diving).

Other men might have been more interested in the Flute Girl who accompanied more bawdy, rousing songs on a flute.

She’s looking quite demure here and rather professional as she plays a double flute or an aulos. The reality is that her aulos playing could well have sounded shocking because, in truth, the flute girl was hired for her looks and sex appeal rather than her musical expertise. With that in mind, she may well have worn far fewer clothes than depicted here. If you’re wondering what’s behind her, it’s her flute case.

The poor flute girl was I’m sure veritably molested by the end of the night – that was part of her job description I think, as sobering a thought as that thought might be, but there was at least one man that she was safe from… 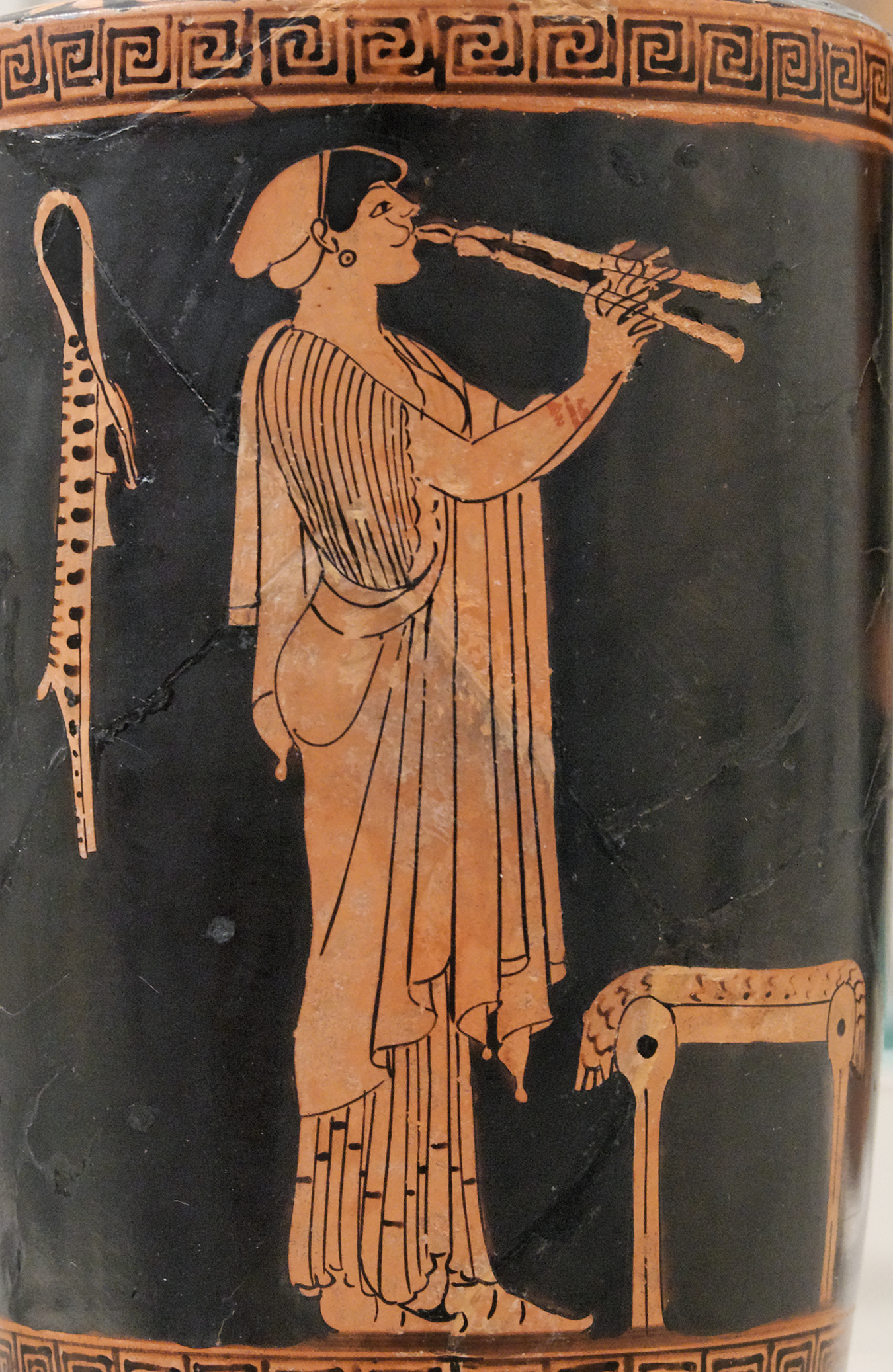 There was an ancient Greek book called Epidemics in which all sorts of phobias were recorded. One of the more unusual entries related to a gentleman who stated that he suffered from a fear of flute girls. I suppose this might relate to the fact that he was rubbish at singing or wasn’t interested in groping her (or worse), in any event the evening ended for him as soon as she started playing because he became so ill.

Assuming, however, that you didn’t suffer flute girl phobia, the evening would offer plenty of chance for silliness and games. 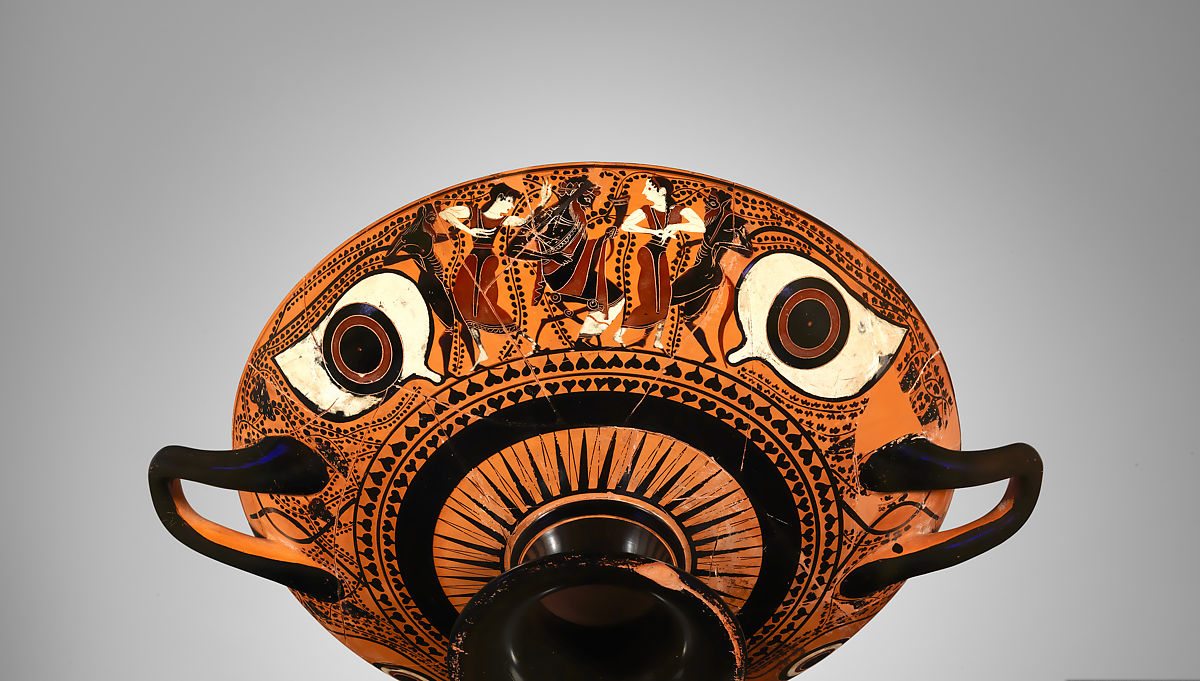 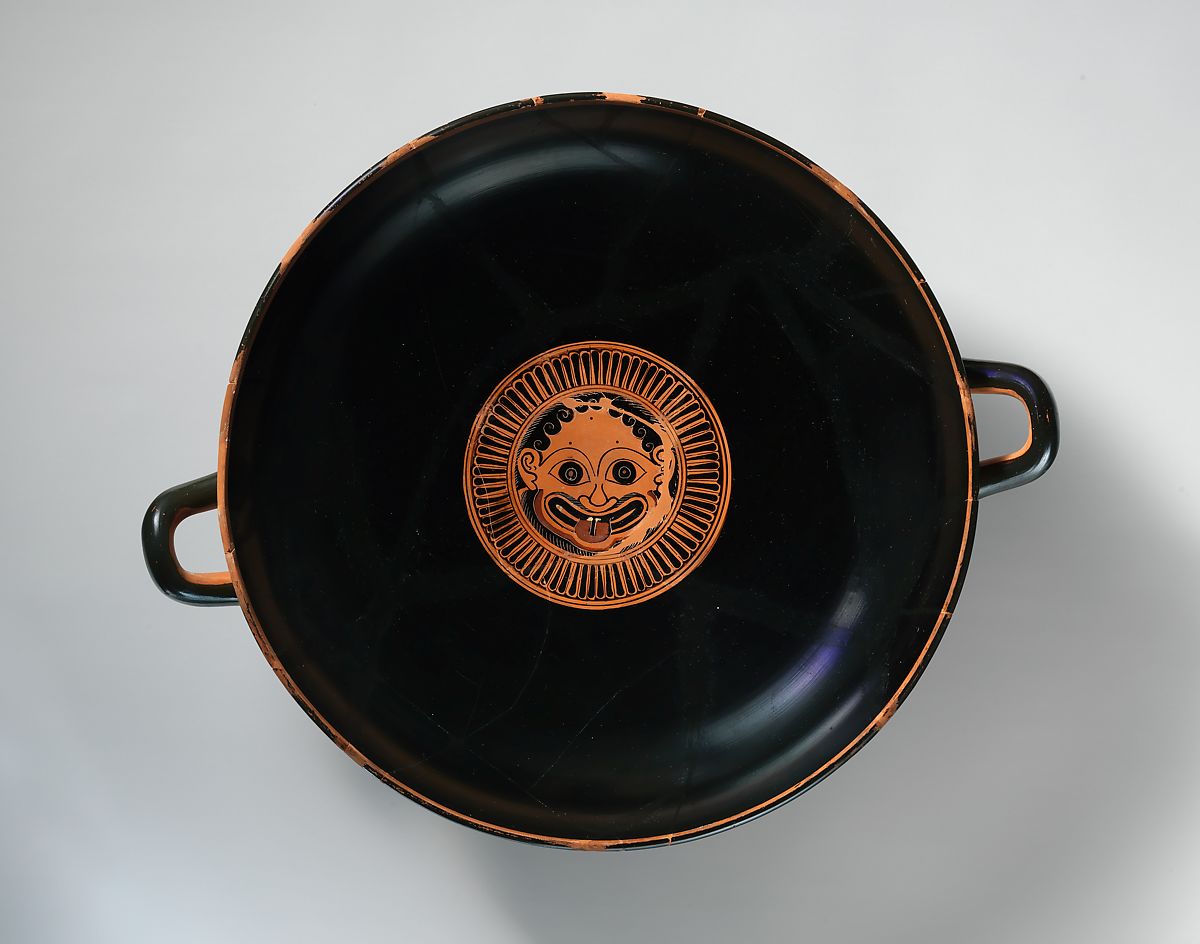 Assuming you didn’t suffer flute girl phobia, the evening would offer plenty of chance for silliness and games.

I mean, wouldn’t it be absolutely hilarious if you turned into a monster with crazy eyes every time you drank? Look at the eyes on this. This is Dionysus in the centre holding a rhyton or a wine funnel with satyrs and maenads on either side.

And as you drained your glass, imagine if a monstrous gorgon was gradually revealed, such as this one.

The gorgon joke was particularly effective as, of course, the drinker’s face that would have originally been reflected in the wine was slowly replaced as the wine was drunk. I feel this would become more apt as the evening went on!

As would flicking things. You get drunk, you flick things. Great game, as depicted both in the Tomb of the Diver fresco and on various drinking paraphernalia. This game was known as kottabos and basically once you’d finished your cup, you’d flick the dregs at a target saying the name of your beloved. If they hit the target, happy days, if not, that wasn’t so good. You’d want to try that one early in the proceedings! The chap here has his next drink lined up – he’s flicking with his right and cradling another cup with his left. 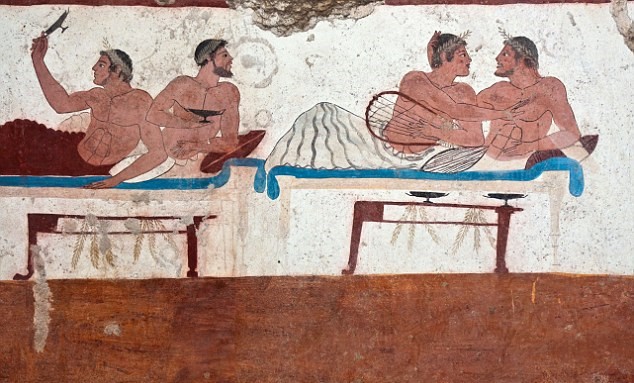 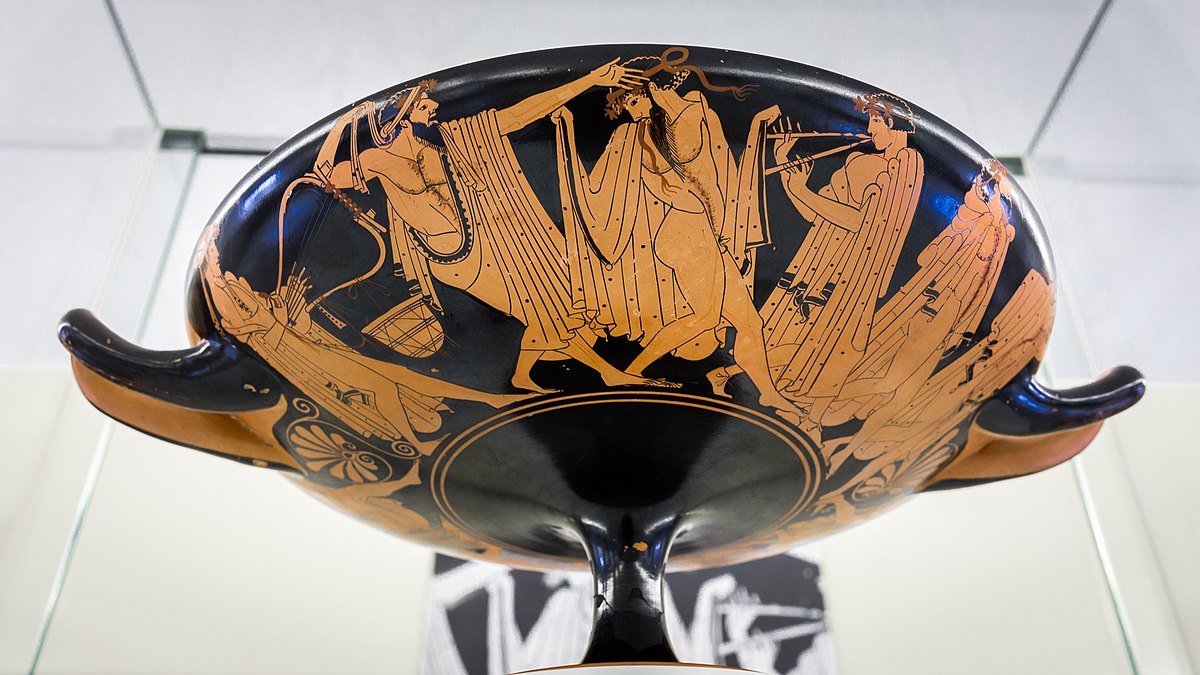 And (almost) finally, there’s dancing. Of sorts. Unfortunately for the neighbours, this doesn’t seem to have been confined to the house where the symposium was taking place. Oh no, the guests would emerge, conga style, accompanied by the flute girl and try to rouse participants from other houses. Out of control!

And this is how the evening ends! 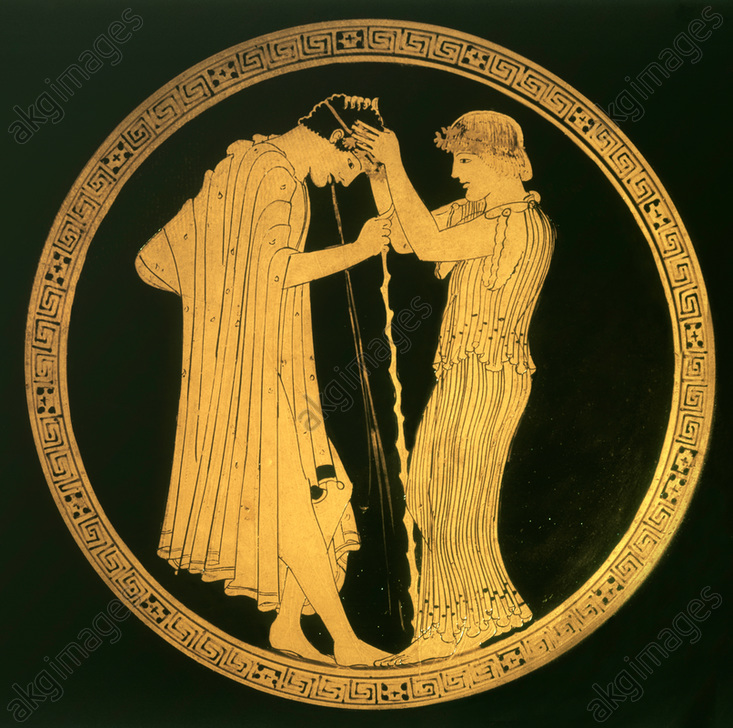