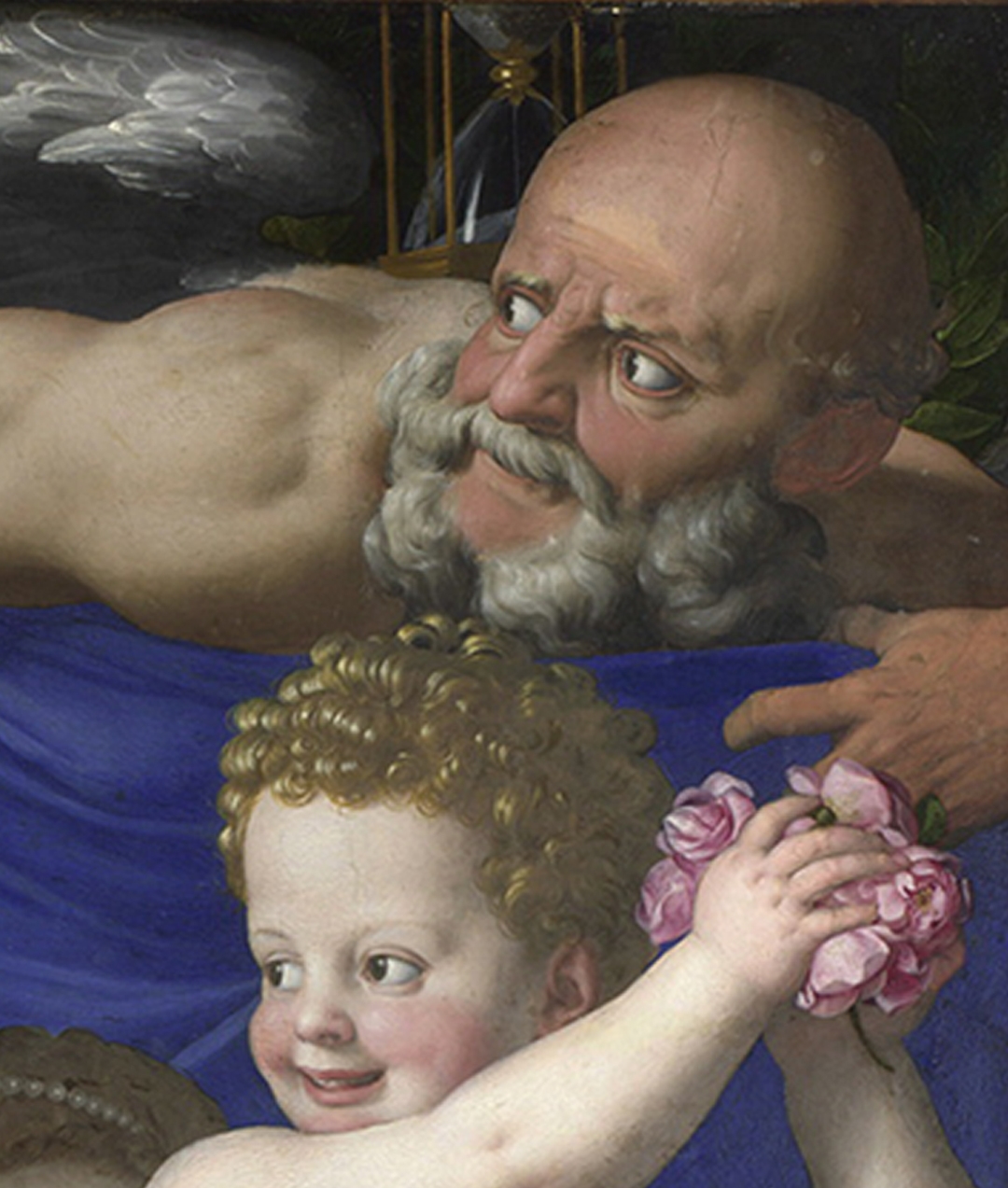 In the top right corner is Father Time with wings and an hourglass on his back. He is either pulling back this gorgeous blue cloth to reveal the scene or is desperately trying to cover it up. Either way, it adds to the theatrical artificiality of the painting.

The mischievous little fellow below him is Pleasure or Folly. He is gaily about to throw blossoms over the embracing couple but in doing so he’s also about to tread on a thorn.

And then we have the figure behind Folly. She is another indication that things are perhaps not all as they seem, or at least that they aren’t straight forward.. 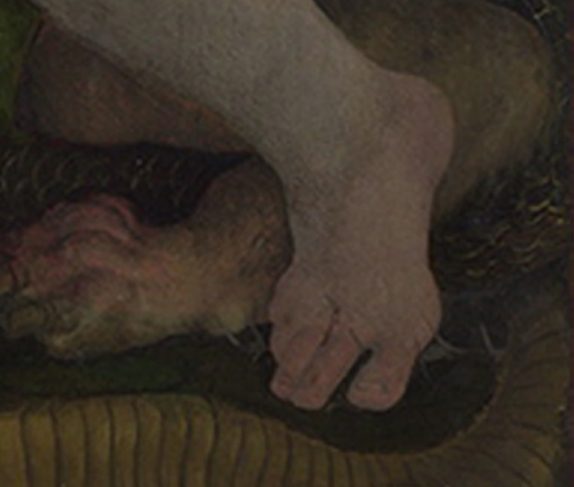 Folly stepping on a thorn

This figure is usually identified as deception. She has a gorgeous face, but the body of a serpent, legs of lion, and a scorpion’s tail. In one hand she’s holding a honey-comb which signifies pleasure and temptation, but then in the other hand she’s holding the sting from her tail. So we are beginning to get a sense of the tone of the work. You can’t have pleasure without pain perhaps, or that it’s dangerous to take things at face value? We certainly can’t take her at face value. Her hands look anatomically distorted which they are because they’ve been swapped and her right has become her left and her left her right. Could things get any stranger? 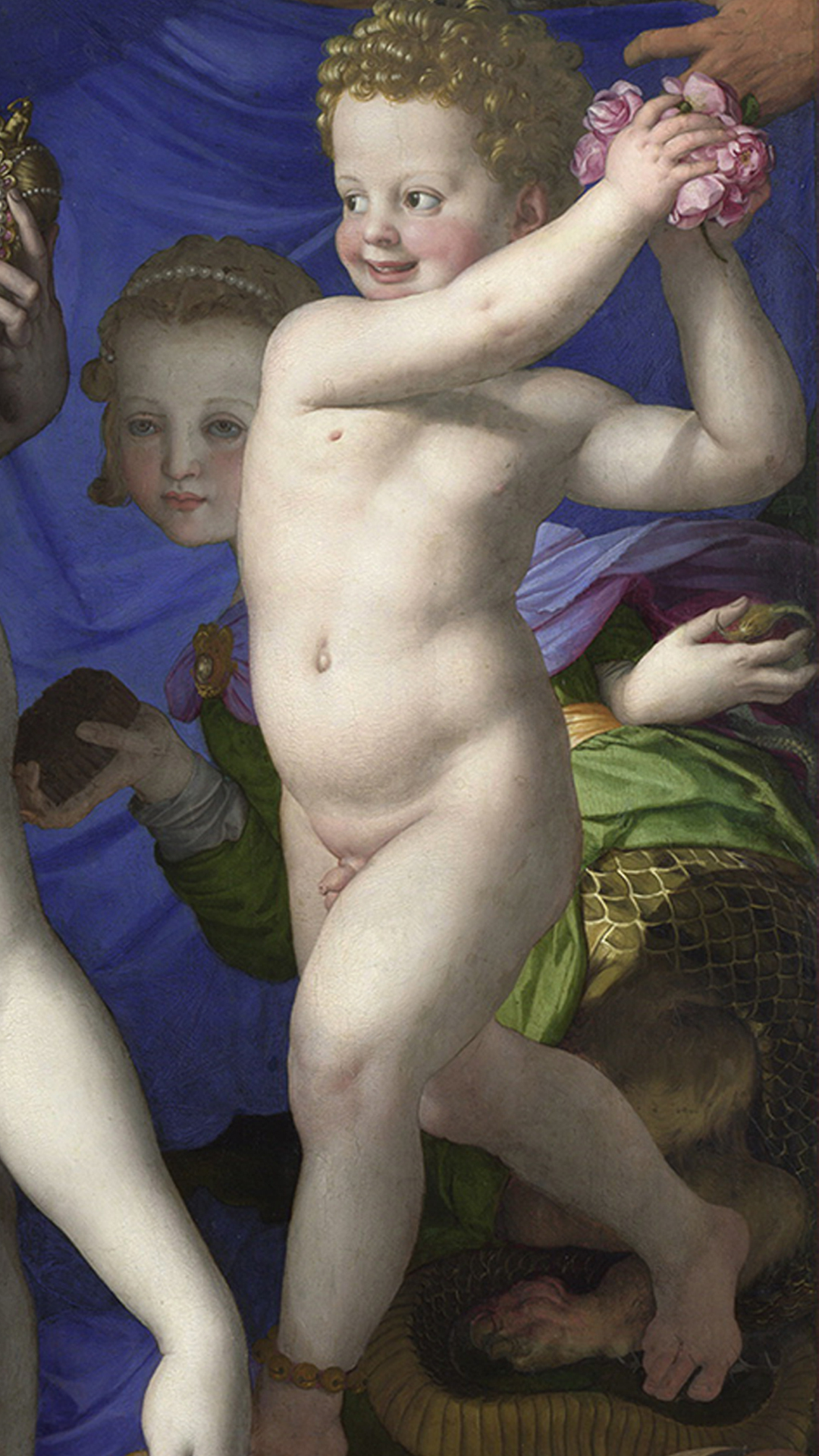 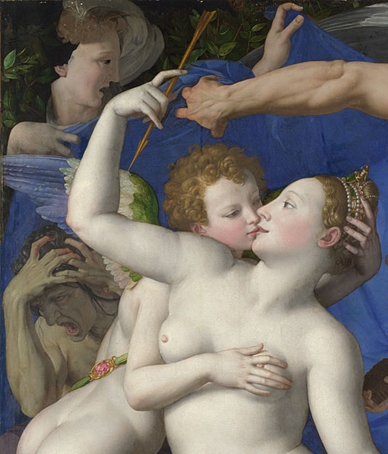 Masks also often signify deception; the figure in the top left corner is very strange and seems to be wearing a mask, but stranger still is that there’s nothing behind it. This is one of the most contentious figures in the work and has been identified as oblivion, fraud, or night.

And finally, we have the figure on the left which for centuries was referred to as jealously. Now, this title is already problematic because allegorical figures are generally gendered. And jealousy is feminine. I don’t, however, feel that this is a woman. The suggestion is that it’s in fact a representation of syphilis.

In 1545 syphilis was rife and the symptoms were well documented. They included headaches, discoloration of skin, gnarled hands, decayed teeth (because of the mercury used to treat syphilis) and disfiguration. Does this figure look as though they are suffering from any or all of the above? I think they do.

With this in mind, the other figures now have context. Time (Father Time) is ticking as life ebbs away although as many sufferers experienced, the disease would seem to disappear only to burst forth with a vengeance after a year or so. Just as night (Oblivion or Night) follows day. To avoid suffering, be careful where you take your pleasure as it’s legacy may bring pain (Deception); perhaps it’s best to avoid the folly of sexual promiscuity in the first place (Folly).

But what of Venus and Cupid?

Well, that kiss and the nipple tweak alludes to the belief that syphilis could be contracted in the womb and passed from mother to baby through breast milk. As for the proffered bottom, it’s an insinuation that the homosexual community were as much to blame.

So ultimately this is a moral tale about the cost of pleasure. And it’s also an intellectual puzzle, unlike most earlier Renaissance works that celebrated balance and structure and harmony, here your eyes are going crazy – it puts you in a bit of whirl just like the throws of passion that can lead to the sort of situation in which you might catch something nasty.

But who on earth would commission such a strange painting? Bronzino worked in the Medici court and this work was gifted by Cosimo I de Medici to Francois I of France (in around 1545). Fortunately no diplomatic incident was recorded. Who’s to know whether Francois ever managed to unpick the complexities of this curious piece?