Bronzino was a mannerist painter. Before we go on, let’s quickly address mannerism: throughout the Renaissance, the highest artistic attainment was to successfully paint the human body. From the 1520’s it became the fashion to exaggerate and sometimes even distort the body, to create a more artificial composition to show off techniques and skills. So, Cupid’s protruding bottom is just to show off a technique? Maybe not but we’ll come onto that. 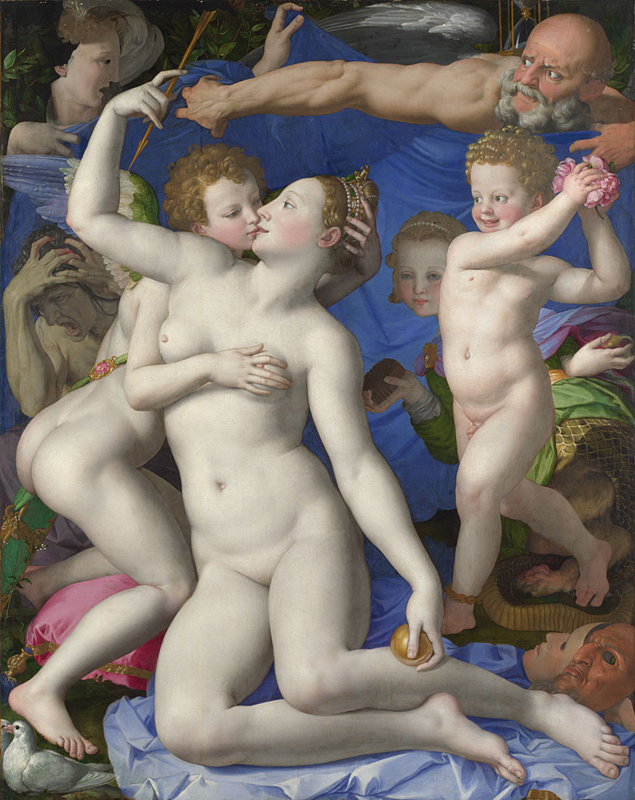 Bronzino, An Allegory with Venus and Cupid, 1545, National Gallery, London

If Bronzino was going for artificial, he definitely achieved it. The light source is bright white. The colours are bright and each individual subject or item in the painting has been carefully outlined and equally prioritised. The overall effect is a bit like enamel because the brushstrokes are completely invisible. The overall effect, before you get into any detail (!), is luxurious and visually appealing. Indeed, Bronzino has made abundant use of ultramarine blue, made from the  semi-precious stone lapis lazuli, which weight for weight was more expensive than gold. 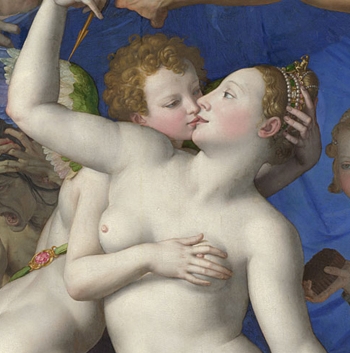 When you get up close to this work, however, it really is quite disturbing. Let’s address the fact that it involves an incestuous kiss because, yes, there is a little bit of tongue action, not to mention the nipple tweaking, and these ‘main’ characters are Venus and Cupid who are mother and son.

They’re the only two characters universally agreed on by art historians. How do we identify them?

This central character has pearls in her hair and is holding a golden ball, which is actually a golden apple – if you recall the story of the Judgement of Paris, he awards Venus the golden apple thereby inadvertently kicking off the Trojan war. The doves to the bottom left are also symbols of Venus. Where there’s a kid with wings and arrows in the vicinity of Venus, we can be fairly sure it’s her son, Cupid.

Why are they kissing that way? We’ll come onto that but no wonder it was considered a bold move when the National Gallery’s first director Charles Eastlake bought the work for the National Gallery in 1860 from a dealer in Paris. Apparently, its last French owner kept it concealed behind a veil. Although Charles Eastlake thought the picture perfectly moral, he knew “clergymen & others” would not, so he asked his restorer to paint out Venus’s searchingly protruding tongue and the nipple peeking between Cupid’s fingers.

An Allegory with Venus and Cupid had, however, actually been censored even before it came to London (unbeknown to Eastlake and only revealed by the 1958 restoration when they were removed). Earlier moralists had added a veil over Venus’s lap and a myrtle branch covering Cupid’s bottom.

They weren’t the first to make alterations. Bronzino himself overpainted earlier postures for Cupid…but this was to increase rather than obliterate the eroticism.

The question is WHY????? I’ll update the blog with a surprising theory next week…