Arcimboldo’s tasty portaits?! Hmmm. Imagine you say to your court painter one day ‘good morning, Giuseppe, I’d like you to produce a new portrait of me please’.

So he does. Only perhaps there was something in that phrase that inspired the artist Guiseppe Arcimboldo to produce (that word again) this portrait of Rudolf II in 1590. 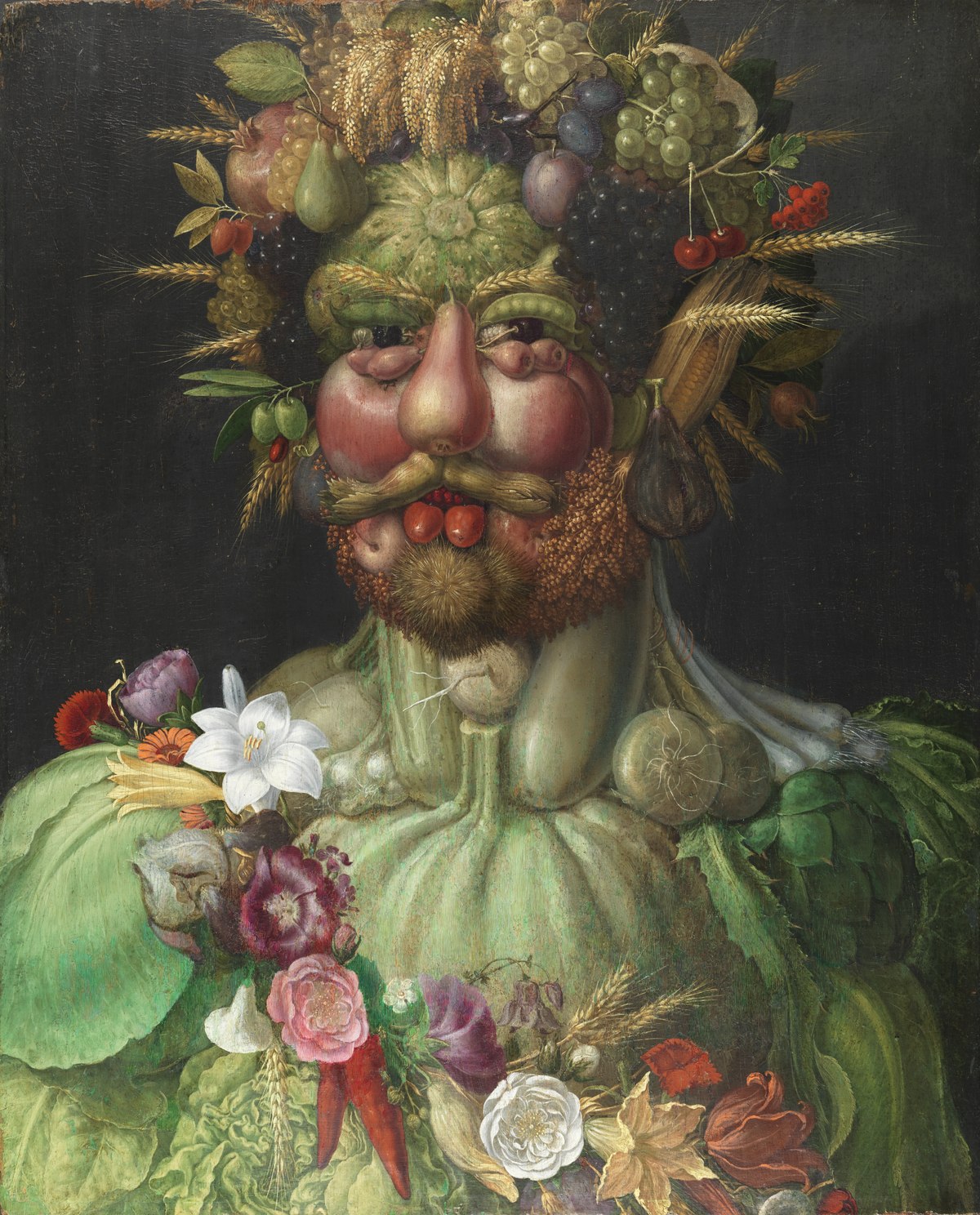 A produce portrait! Get it?! Was he looking to be sacked? Exiled? Rudolf II was the Habsburg Holy Roman Emperor; he was one of the most important men in the world and Arcimboldo was his court painter.

We’ve heard of the apple of your cheek but apple cheeks? A pear nose? Peapod eyelids? Wheatsheaf eyebrows? Was he kidding?

If he was, Rudolf laughed. Rudolf loved it.

Art historians over the years have declared that Arcimboldo was absolutely taking the mickey out of the Habsburg Emperor, they have certified him mad, they have dismissed him as merely fanciful but actually he was completely, if rather eccentrically, in tune with the court in which he worked.

The late 16th century was one of exploration and discovery and there was a real fascination for the wonders of the world in the intellectual, avant-garde, milieu of the Habsburg court which became a centre of scientific study.

Rudolf’s father, Maximillian II, was particularly interested in botany and zoolology and Arcimboldo had access to rare collections of flora and fauna which he included in the works.

If you missed the point, the portrait is called Vertumnus. Vertumnus was the Roman god of seasons, agriculture and growth. Basically the essential elements of a prosperous 16th century society. Essentially the portrait was an allegory for prosperity, harmony and peace. Perfect for a world leader.

But how could Arcimboldo be sure that Rudolf II would appreciate his efforts? Because this isn’t the first time that he had created works of this kind. The Four Seasons and The Elements are two series of paintings presented to Maximillian II, Rudolf’s father, in 1563 and 1566 respectively. They’re works of genius! 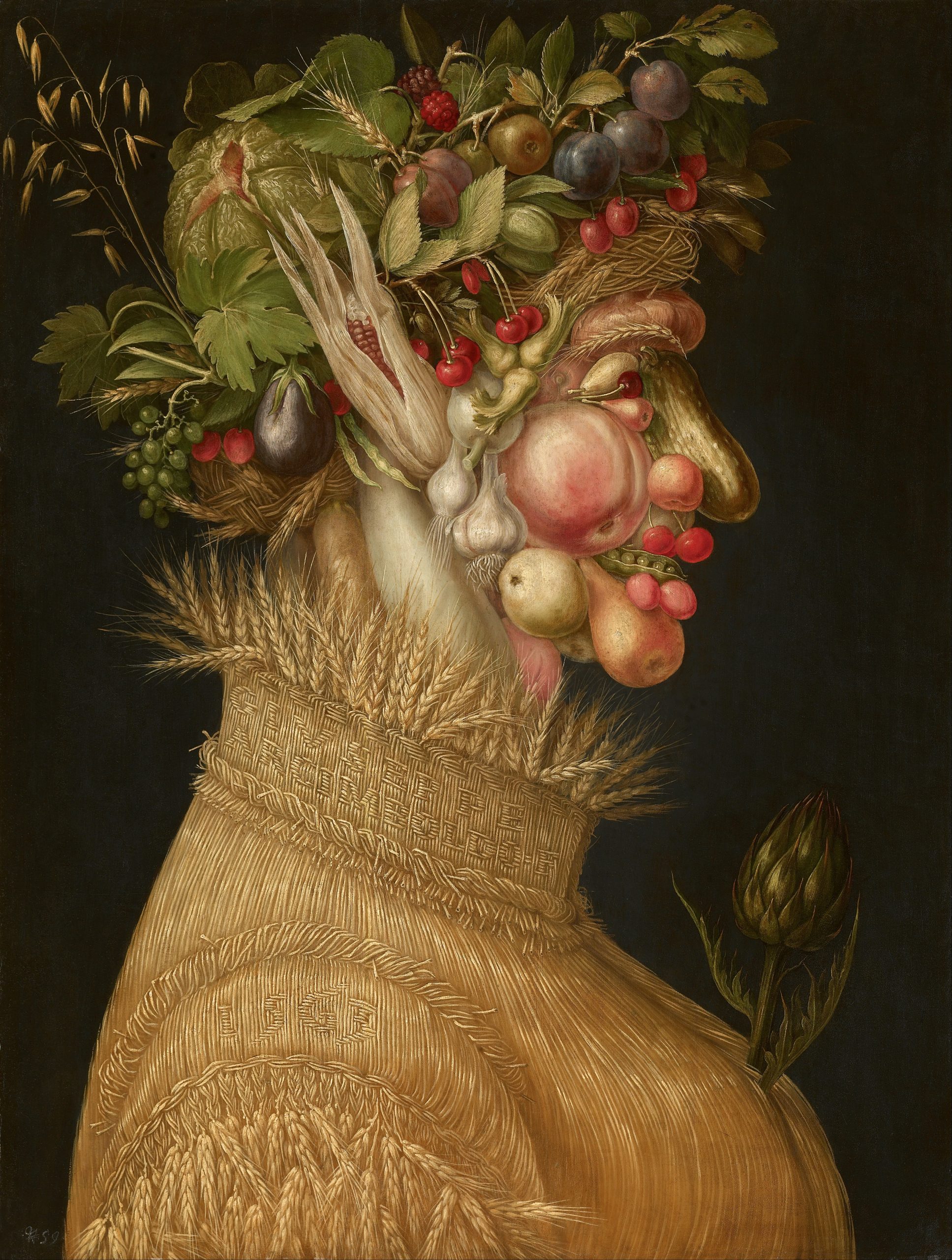 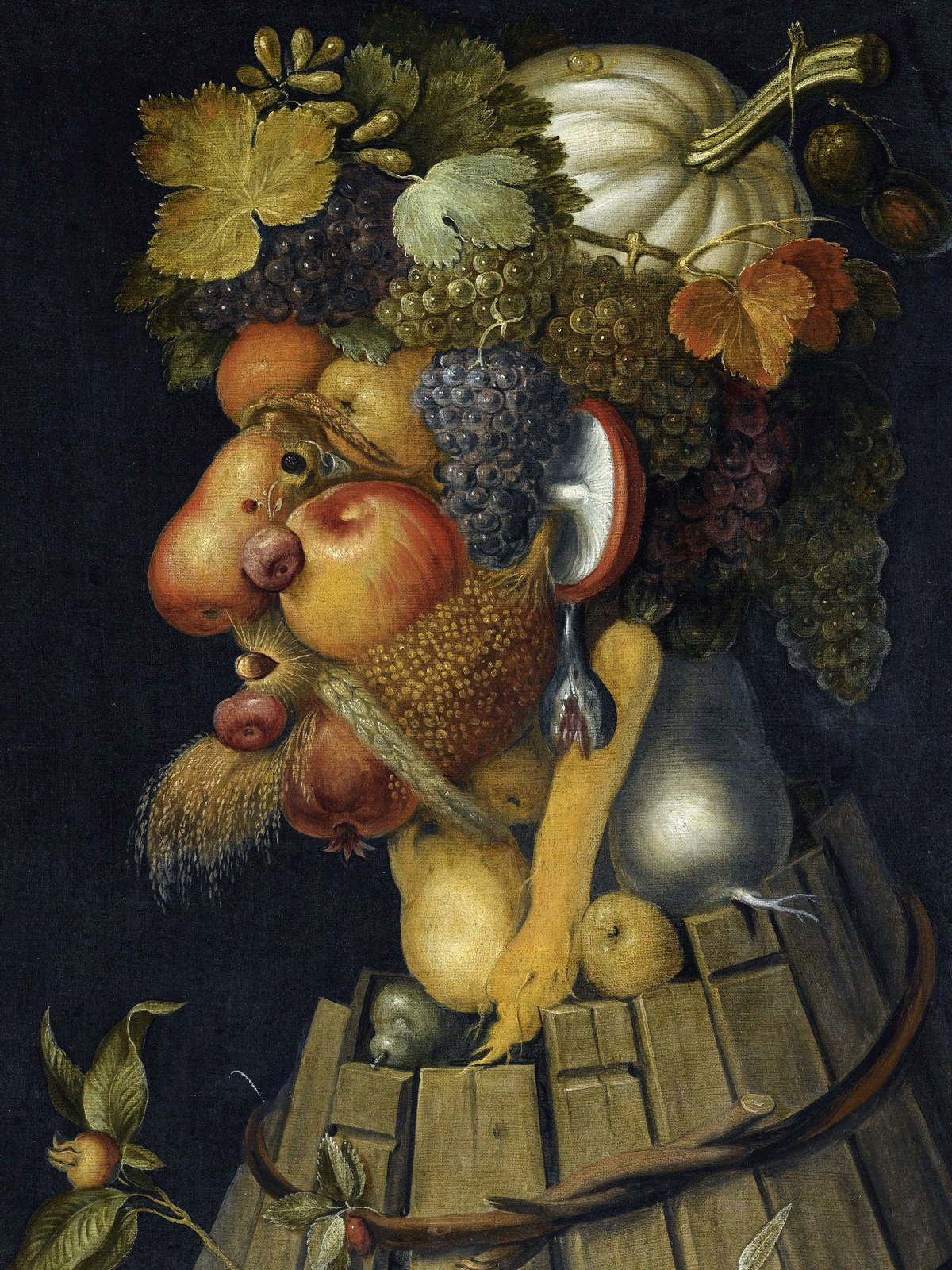 Spring is a vision of blossoming flowers; summer is all fruit and vegetables with a lovely visual pun in the form of an ear of corn for the ear; autumn is autumnal in colour and composed of the fruits and nuts enjoyed in this season, and winter is a bit bleak – a gnarled tree trunk to represent older skin and a fabulous mushroom mouth. 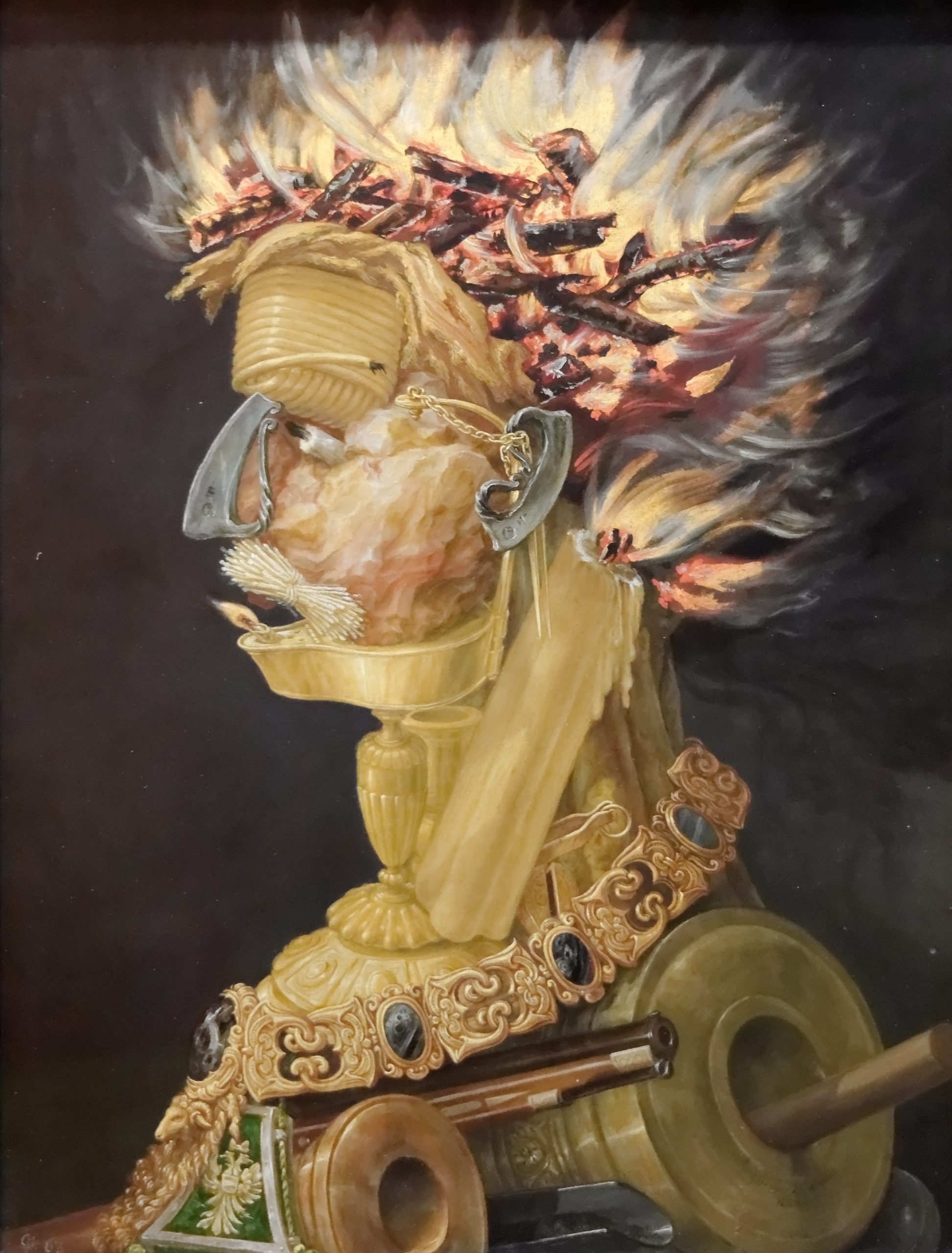 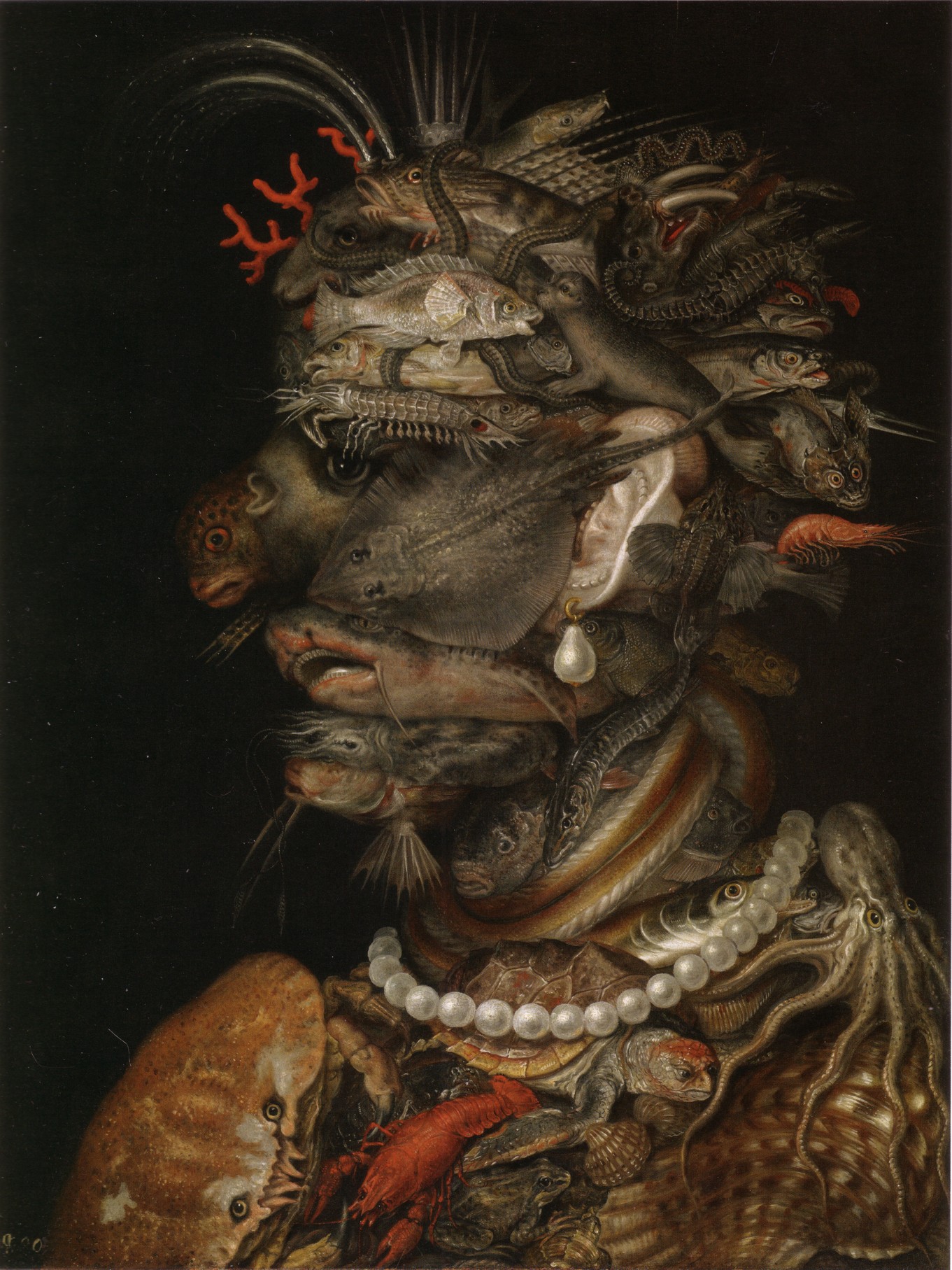 Air we only know from a copy and the original is lost but it seems that it was composed of birds and feathers. I’d challenge anyone to recognise this as a head from close quarters!

Fire is a bit unusual as it’s not a composite of flowers and animals but inanimate objects. This image probably has the most references to the Habsburg dynasty. The nose and the ear are fire strikers, one of the family symbols, that would create a spark if struck against the flint of the cheek. The golden ram is a reference to the Order of the Golden Fleece; the Habsburg’s highest honour. The double headed eagle is a symbol of the Holy Roman Empire and the canons are a reminder of the might of the Habsburg army.

Want to visualise what a neck made from the torso of a cow would look like? I give you Arcimboldo’s Earth. He also creates an eye from the open jaws of a wild dog and a nose from a hare’s bottom. The relationship between the animals might be questionable (the hare is giving the wild dog a hug as the former is about to plunge it’s teeth into the hare’s neck) but the result is stunning. The lion that forms the shoulder is readily visible and a reference to the mythological hero Hercules from whom the Habsburgs claimed their lineage. And they had pet lions.

Water is inevitably made up of various sea creatures including an octopus, a crab, a lobster and a prawn. I’m enjoying the fact that the lobster and prawn must be cooked as they’re pink/red, although apparently you can get red lobsters in the wild. The addition of the pearl necklace and earring add a touch of class.

Maximillian asked Arcimboldo to copy the paintings so the work depicting Spring and Autumn aren’t the originals which are now lost, but copies given as gifts to Philip II of Spain and Augustus of Saxony, and Air is a copy by an unknown artist. Clearly he wanted to share the joy whilst promoting the playful intelligence of his court artist.

It would seem that despite being the most depressing to look at, winter particularly took Maximillian’s fancy. He dressed as Winter in a festival inspired by the paintings. Arcimboldo designed the costumes and the scenery.

So this was a style, a tradition even, that was unique to the Habsburg court but somewhat intellectual, a whole lot of fun and surreal before surrealism was even a thing.