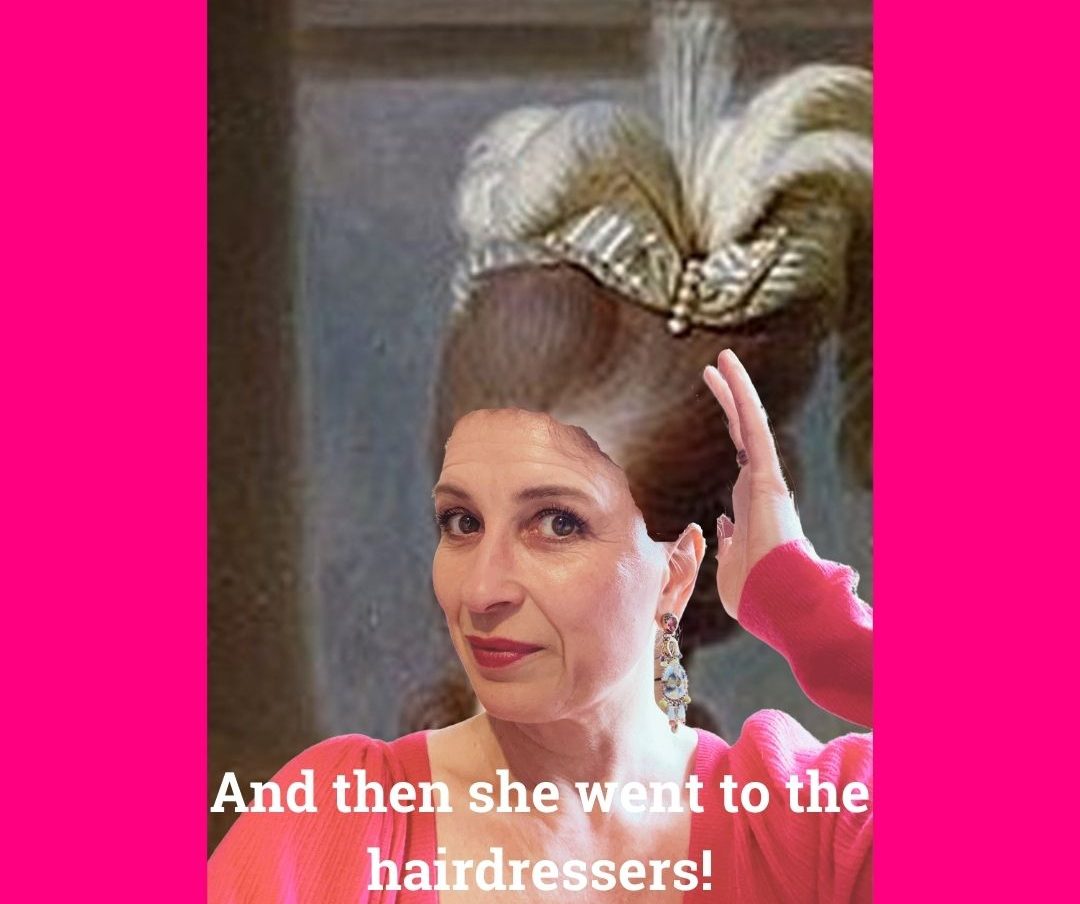 Hair matters. As I write this, half the nation have hair like Rembrandt. Well, if not actually the same, they are sporting a frizzy, unkempt look born of not being able to get to a hairdresser for six months or so. The other half are luxuriating in newly coiffed fabulousness.

I’m going to the hairdresser as soon as I’ve posted this. I’ll post an update. 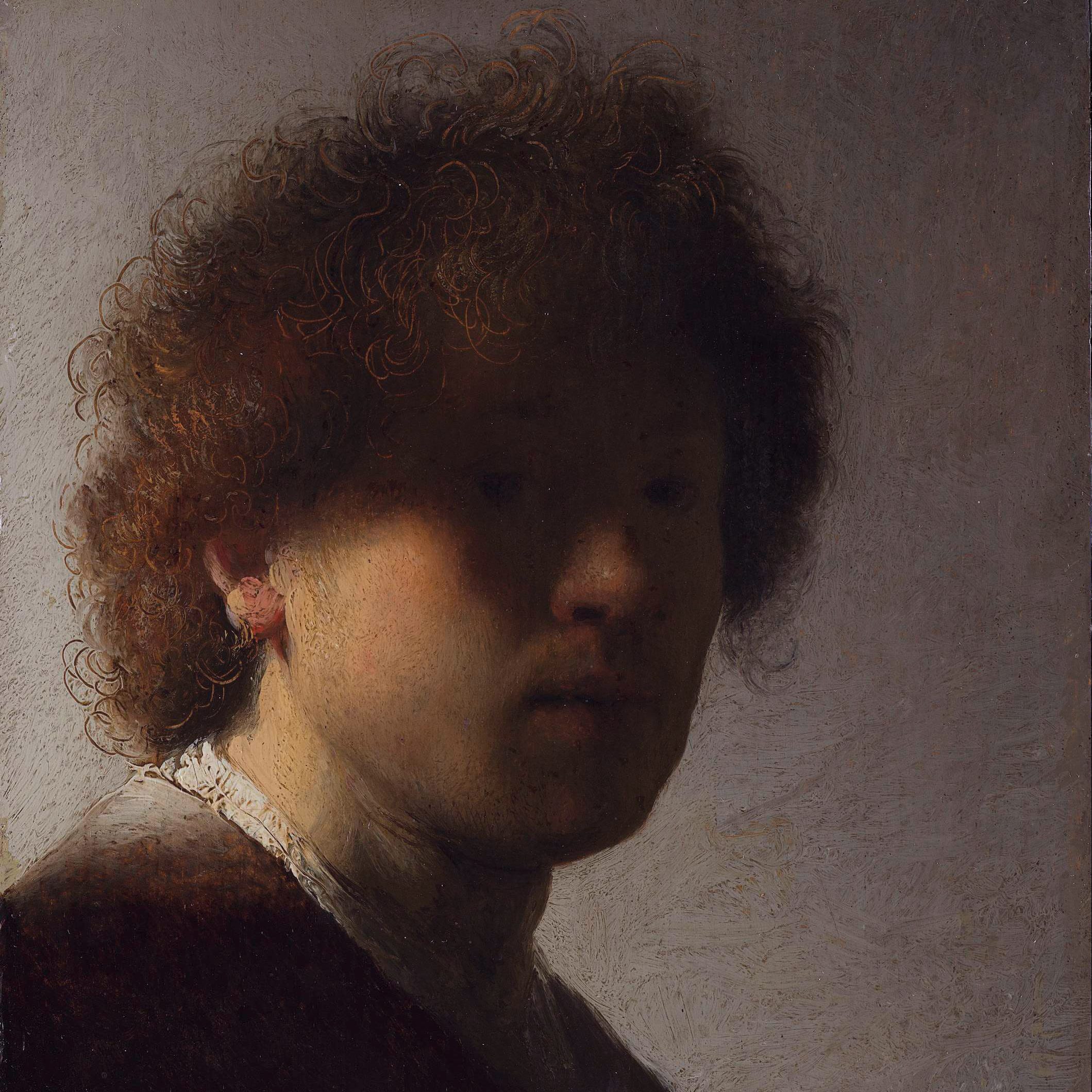 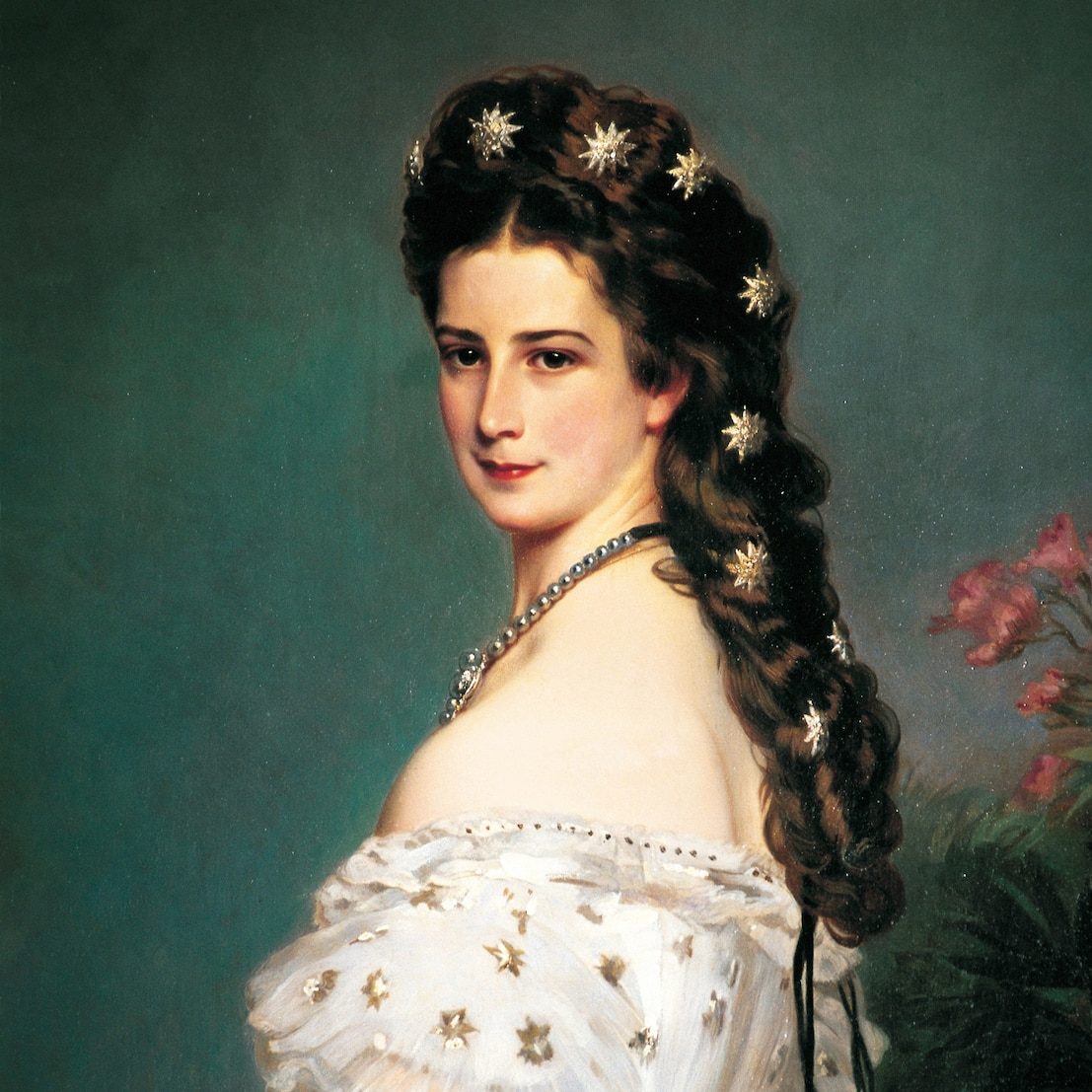 Franz Xaver Winterhalter, Empress Elisabeth of Austria, 1864, Collection of the Prince of Thurn and Taxis (detail)

Back to Rembrandt. This is one of his very early self-portraits, possibly the earliest, created in 1628 when he was 22, before he moved to Amsterdam from Leiden.

What a selfie debut! It takes quite an artist to decide to basically hide their face in a portrait. You don’t see the eyes for a second or two when usually they are the focal point. And he’s used really loose brushwork by his ear, and probably the end of the brush to make squiggles in the wet paint to create highlights where the sun has caught his hair. So innovative. So modern!

Perhaps during lockdown, you might have felt like turning to wigs, hairpieces and decorations? Cue the fashionable ladies of the late 1700’s. Here’s the most famous up-do wearer not just of her time, but, perhaps, of history. Marie Antoinette is rocking her ‘up do’ in this portrait of her by Elisabeth Vigée Le Brun. It’s the first of 30 portraits the artist painted of the French queen. Vigée Le Brun recalled, probably in the memoire that she wrote in her later years, that the queen ‘walked better than any other woman in France, holding her head very high with a majesty that singled her out in the midst of the entire court’.

Not surprising with that hairdo! 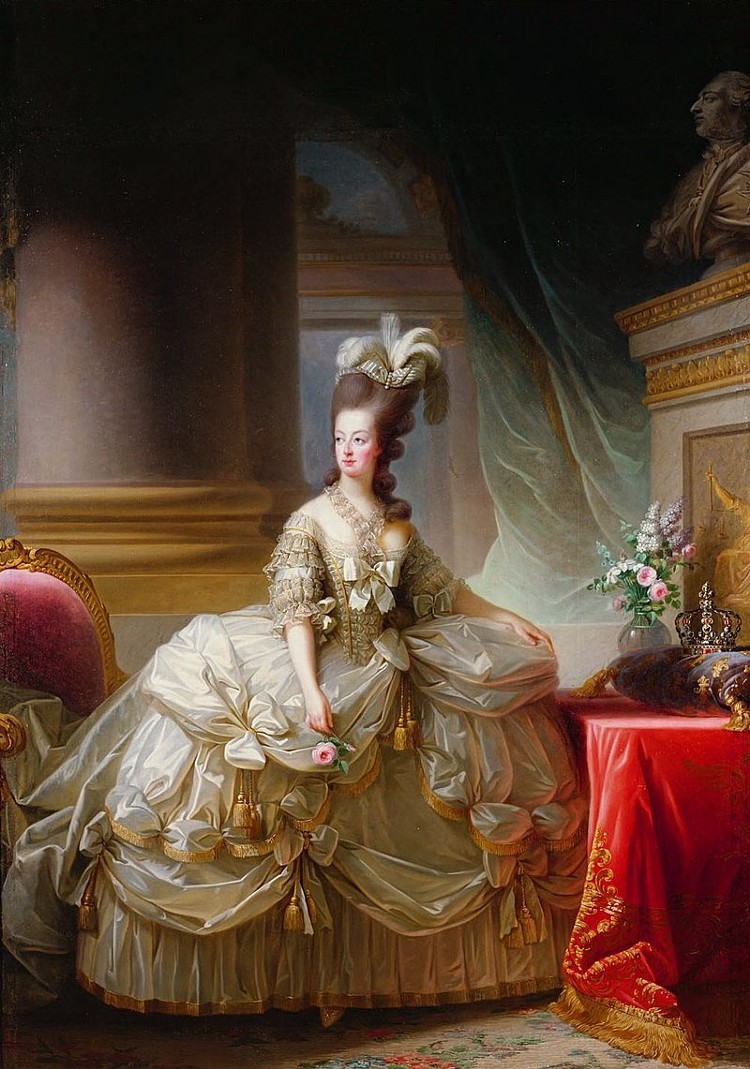 But how did she manage it? Well, I guess part of the point of having hair like that is that she didn’t manage it herself. Frames, padding and hair extensions all played a part. The hair was curled with hot tongs and then covered in lard which acted as 18th century hairspray. Delicious. The piece de resistance, however, was created when the whole thing was dusted with lead powder. So smelly, toxic and altogether a bit of a nightmare because, of course, this kind of do was a bit of a mission to create and therefore you weren’t going to wash it for a while. Cue head lice at one end of the scale (there was such a thing as a scratching stick), and actual mice at the other end of the scale. It has been said that women wore cages to protect their hair at night. Sounds crazy but it might be true?

The men definitely got the easy end of the bargain as they were the ones wearing the wigs.

Vigée Le Brun, by the way, encouraged Marie Antoinette to go for a more relaxed look, which, it’s said, the queen actually favoured. This was exhibited at the artist’s first Salon in Paris very briefly because she was asked to remove it after a day or so as it was condemned as inappropriate for the public portrayal of royalty because Marie Antoinette looked ‘undressed’.

You can see that Vigée Le Brun herself went for the same look! 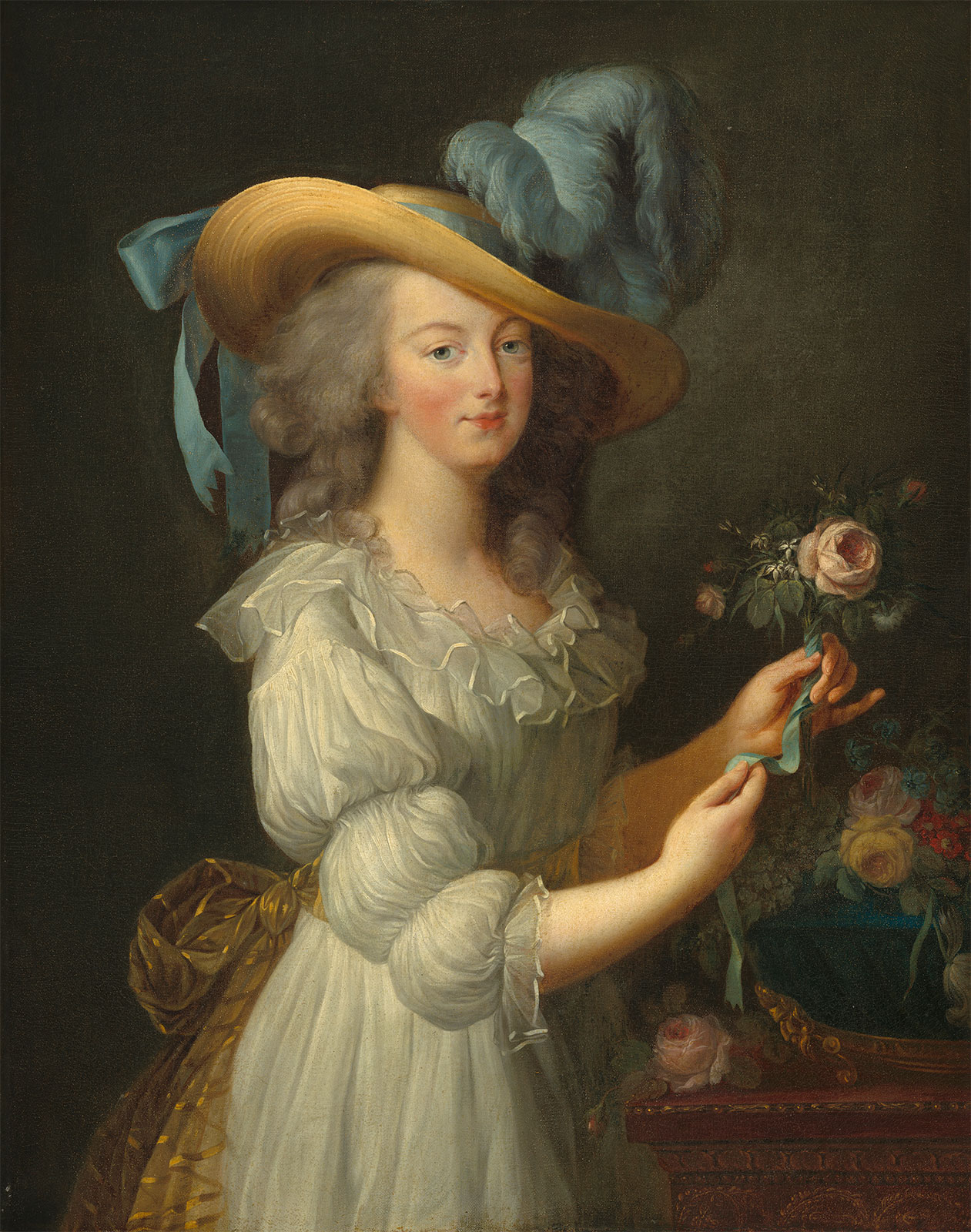 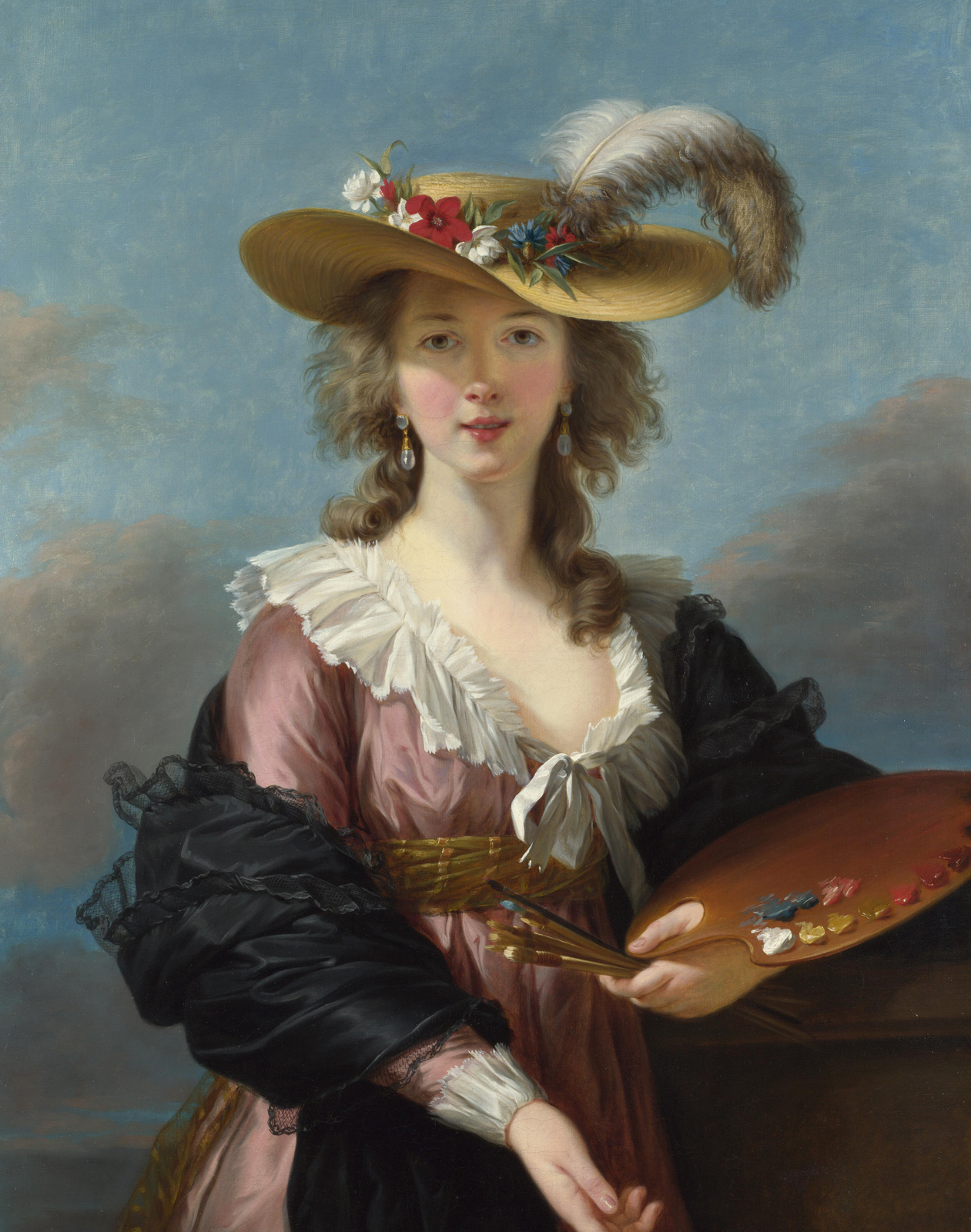 Now this is beautiful hair! This is Empress Elizabeth of Austria. Her hair was absolutely her pride and joy. It fell to her knees apparently – at least it did when she was 15 – and in later years she was completely paranoid about it falling out altogether. Which it may have done because she suffered from eating disorders. She used to have a light coloured silk cloth placed underneath her whilst her hair was brushed, after it had been washed with brandy and egg whites; presumably the egg whites first (?!), and then she’d count to see how many she’d lost. I imagine her maid was always worried about it being too many as life probably wasn’t nice for a while.

This is a completely mesmerising portrait by Franz Xaver Winterhalter. The stars in her hair! The shine! She’s absolutely stunning. 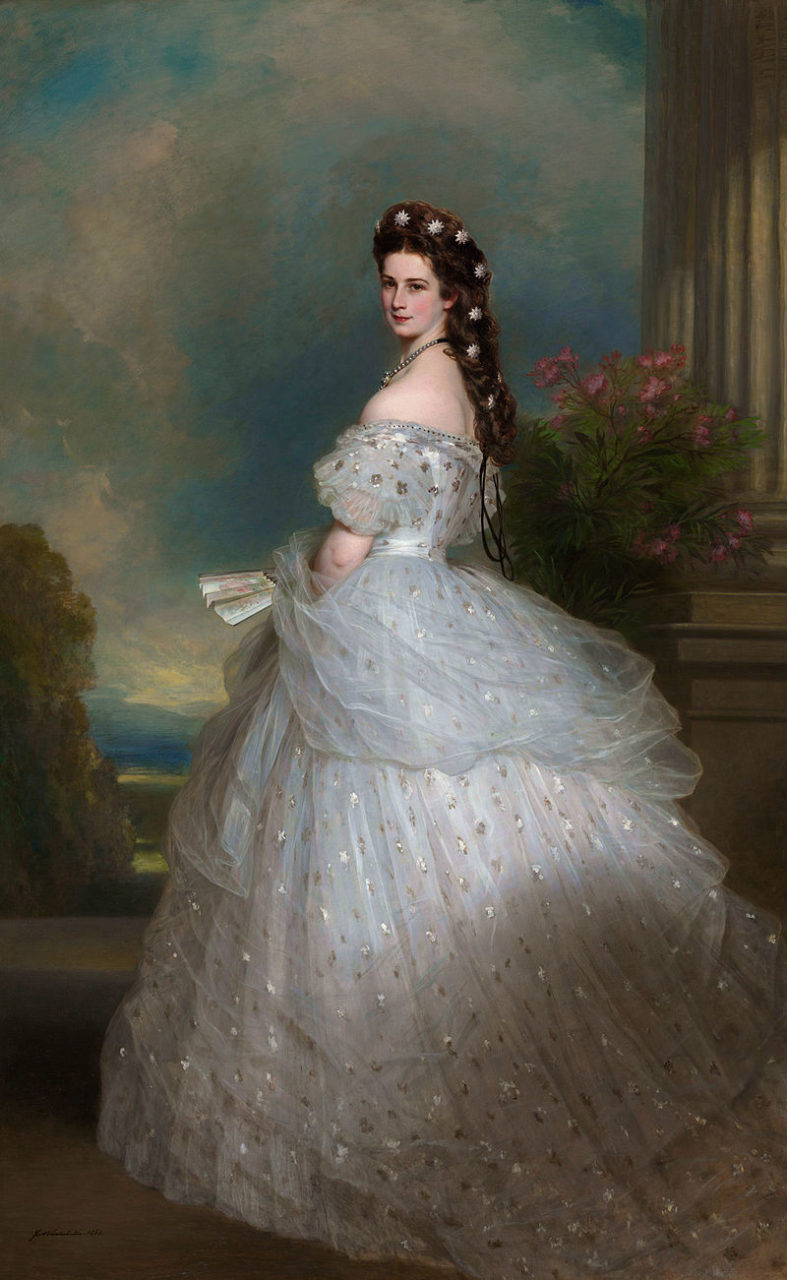 Franz Xaver Winterhalter, Empress Elisabeth of Austria, 1864, Collection of the Prince of Thurn and Taxis

Stunning and very sadly absolutely miserable. Apart from her eating disorder, she suffered from very low self-esteem and bouts of depression, was exceedingly unhappy in her marriage, and, at one stage, had a nervous breakdown.

The thing that she wanted to hold on to was her beauty which became an obsession. According to her various biographers, she began to live on a diet of meat juice, fresh milk and egg whites mixed with salt. She travelled with her own cows, not sure about the hens or other animals…

To keep her waist tiny, she slept with hot towels around it and wore a silk mask with raw veal in it, presumably not to bed, but hopefully only when she was alone.

Her strange, troubled life was cut short when she was assassinated aged 60 by a crazy anarchist who just wanted a murder a royal. Sadly he crossed paths with her first when she was walking by Lake Geneva. I’m sure she still had great hair.

On that note I’m shortly off to get my hair washed in brandy.