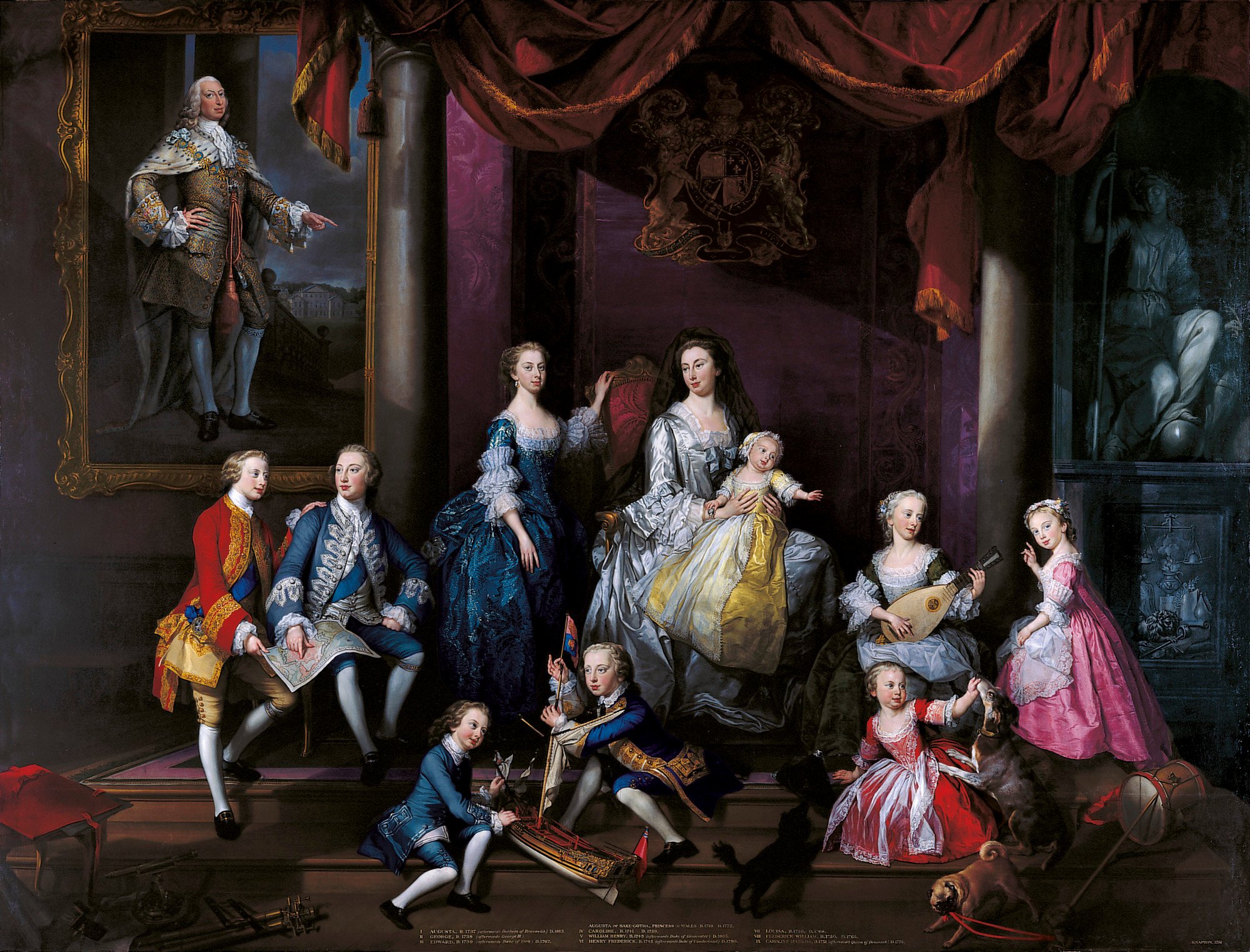 I want to start with this rather saccharine but clever example of 18th century portraiture which happens to grace the walls of the state dining room at Windsor Castle.

In the centre beneath this huge canopy of state is Augusta Saxe-Gotha and surrounding her are her nine children. Arguably, however, the whole work is dominated by a portrait within a portrait; there’s a rather demonstrative fellow in a painting in the top left corner pointing directly at Augusta and she, in turn, is gazing at the young lad in the blue who happens to be her eldest son who has just become heir apparent and will later become George III.

If we take a closer look she is wearing a widow’s veil. The situation is this:

Augusta Saxe-Gothe was married to Frederick, Prince of Wales whose father was George II. They had nine children, the last of which was born after Frederick shuffled off this mortal coil, apparently as a result of being (accidently) hit in the head by a cricket ball. It’s possible that as a direct result of the blow, he developed an abscess on the lung which burst. And that was the end of him, much to his parents’ ‘delight’. I’m sure they were sad somewhere inside but they didn’t seem to like him much. In fact by all accounts they hated him.

His mother, Queen Caroline is reported to have called him not just an ass or a canaille (meaning dog, riff raff) or a liar or a beast but the GREATEST of all these.

His son, the future George III had more love in him. He said on hearing of his father’s death that he felt something ‘here’ (in his heart), just as he did when a couple of workmen fell off the scaffolding at Kew.

Not a close, loving family then?! Bear all that in mind!

I mentioned that this is quite a clever group portrait. To the right of the work is another work of art within the work of art. This is Britannia a symbol of pride, unity and strength, beneath her is a British lion a symbol of valour and bravery and loyalty. The ‘Magna Carta’ and the ‘Act of Settlement’ to secure Protestant succession to the throne are also included. The symbols of the Constitution are, therefore, on one side, balanced with the line of succession on the other.

Notice too how the young princes are looking at a map referencing the large Empire that Britain ruled over at the time (ironic in retrospect as George III famously ‘lost’ Britain’s colonies in America), and their brothers are playing with ships and flags. 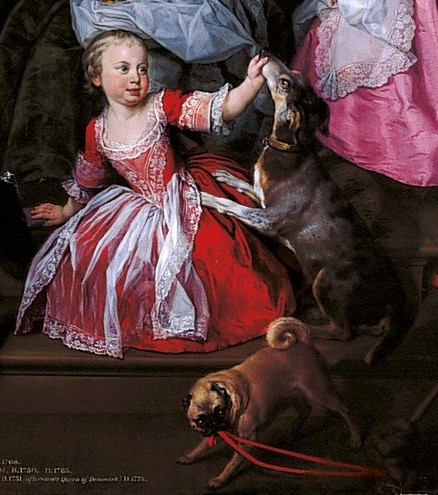 The girls, on the other hand, are all about music and dancing and pets. So cute! Except this one who I think has the cruel family trait. Is she not suffocating that dog?? It’s cross eyed for sure.

A cold cruel family? Maybe. Frankly they could have been anything when Augusta arrived to marry Frederick. She wouldn’t have known because she had barely even time to say ‘Guten Tag’ before she was winched into a wedding dress and marched up the aisle.

This is the real or at least the original theme of this Elevenses. Finally! 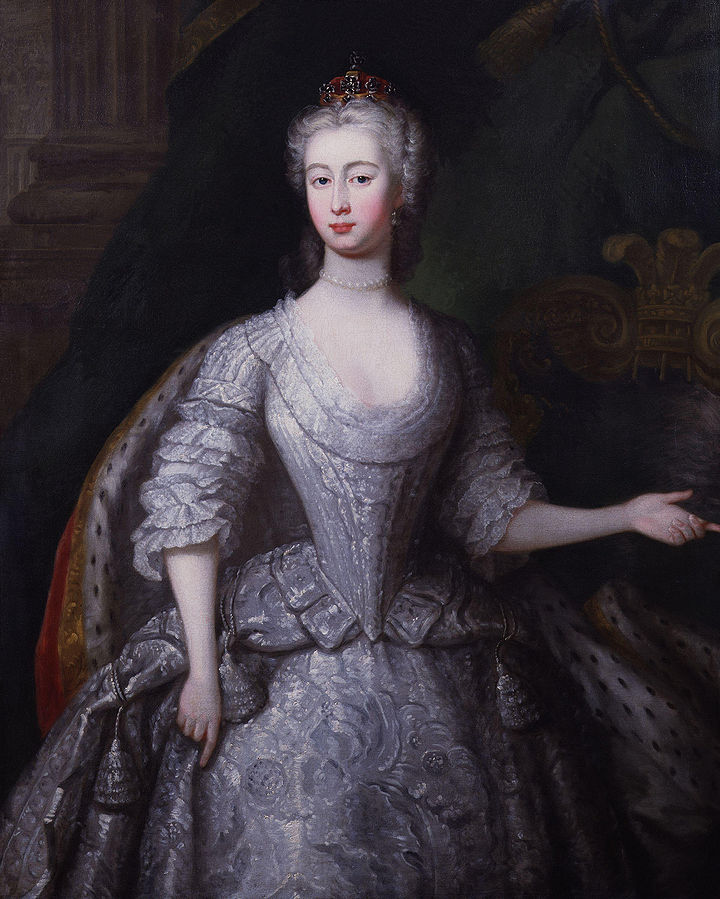 She’d been sent from Germany speaking virtually no English or French, and the story goes that when she met her parents in law to be, she threw herself at their feet in submission. They may have been impressed at that but not so much that she was still playing with her favourite doll when she arrived. Her sister in law told her to stop when she appeared with her dolly in the window of her residence for anyone to see.

But now we come to the wedding day. Beautiful wedding dress, mother of the groom (Queen Caroline) dressed to the nines. What does the bride do? She pukes all over herself and her prospective mother-in-law. It must have been quite a memorable day to say vows that you don’t understand smelling of vomit with an equally foul smelling Queen translating in your ear.

All that and she never got to be Queen herself!

Here she is again at around the same age in a portrait by Hogarth.

Hogarth. Famously terrible marriages. We have more of that theme coming over the next few weeks… 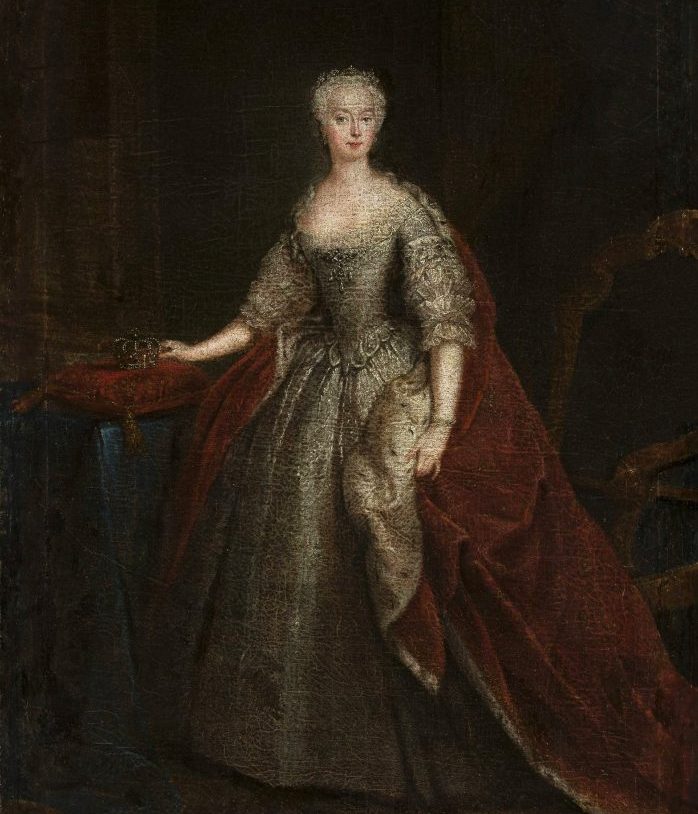