Last week was all about Behemoth and Leviathan, but is the Kraken the same as Leviathan? In some mentions in popular culture, they are interchangeable but I did some digging and as you can see from these images, they are indeed similar but not quite the same… 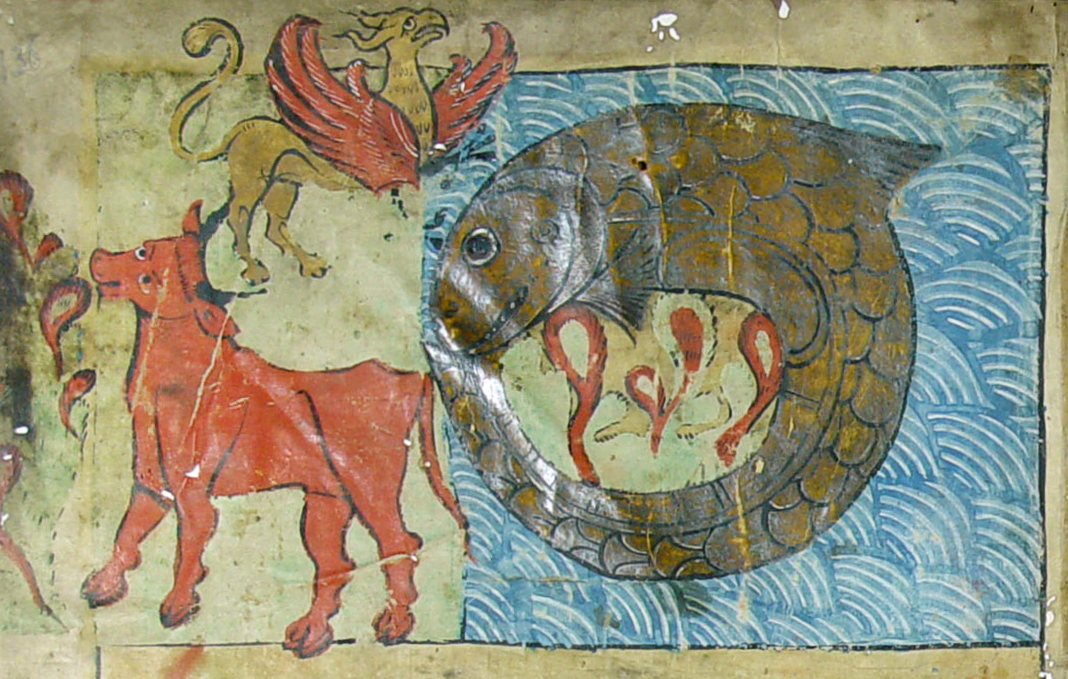 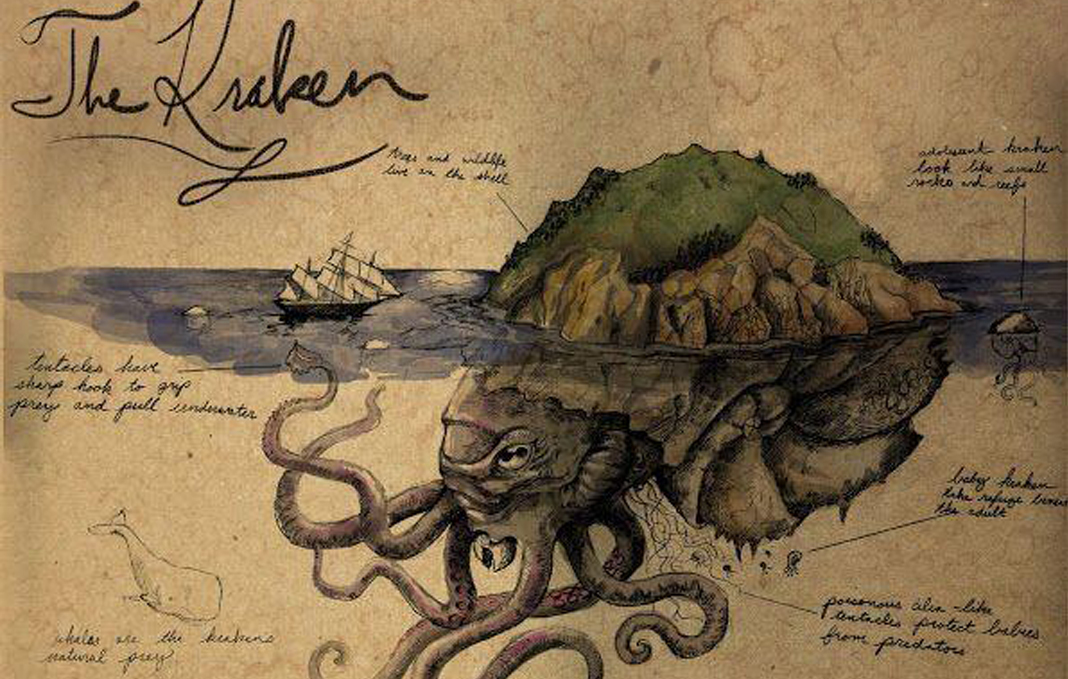 As you can see from these images, they are indeed similar but not quite the same.

Leviathan (the ‘fish’ to the right of the first image) is wrapped around an island, the Kraken IS an island.

The image of the Kraken is from a website called wasted talent – the strapline is ‘Corporate Artists wasting their talent by day, and unleashing their art super powers by night’. Love it!

The story goes that in around 1,000 AD a bishop was travelling from Norway to Greenland, spotted an island, celebrated mass on it and was very surprised to find that, after returning to his boat, he turned to take a last look but it had disappeared.

Anyway, said bishop was lucky to escape because this island was, in fact, what King Sverre of Norway termed in 1180 AD, ‘The Kraken’.

So the story of the Kraken is a Norse myth that actually has nothing to do with ancient Greece at all, no matter what you were led to believe in the Clash of the Titans.

The Kraken was described as a huge creature with tentacles and eyes the size of dinner plates. Some stories claim that the tentacles of the Kraken are more than a mile long which would make sense if it was mistaken for an island. 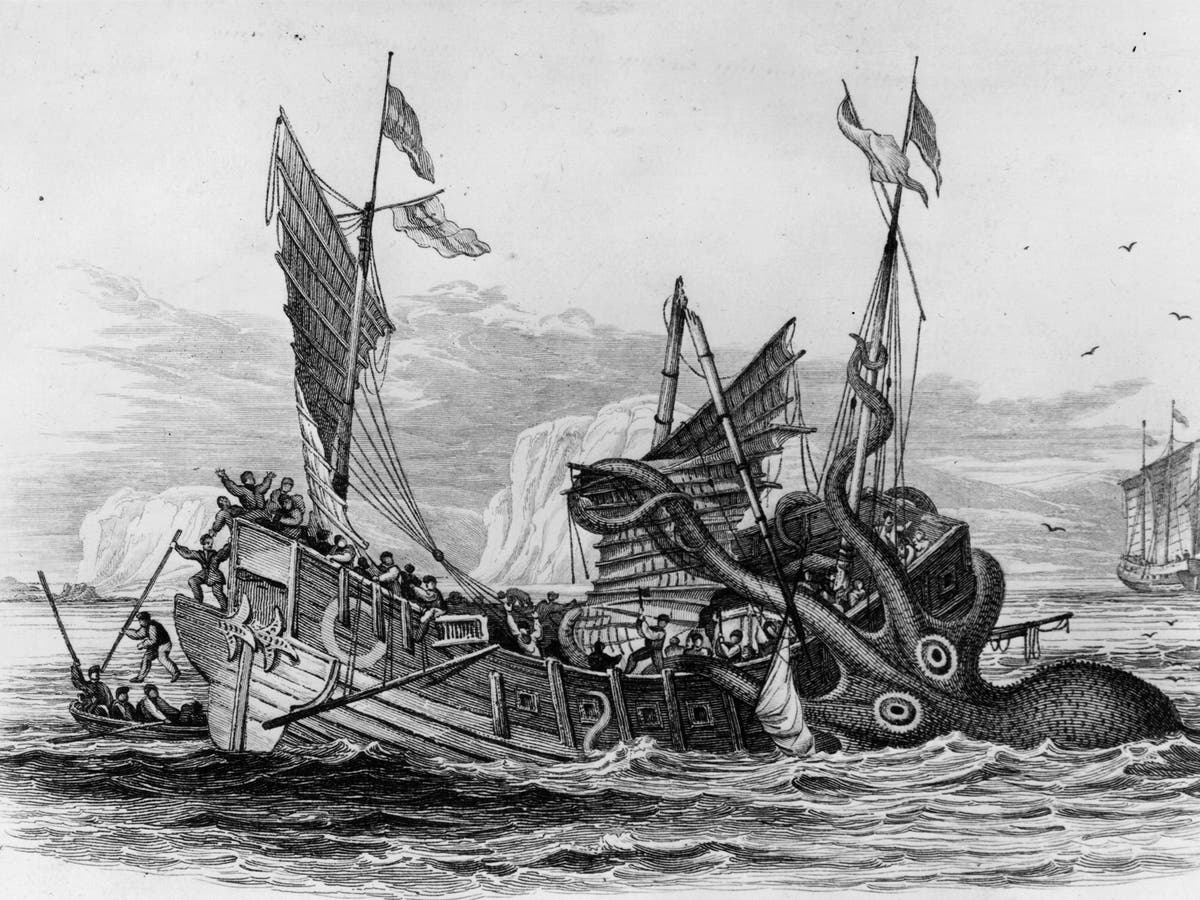 Accounts of what the Kraken liked to eat were varied. According to the more bloody thirsty legends, the giant beast would rapidly ascend from the depths to wrap its monstrous tentacles around a ship, pulling it under the waves where it could devour the sailors.

Or it would swim around and around the vessel to create a maelstrom and sink the ship that way. Is that reminiscent of anything? Remember Charybdis?

Some say that it was more interested in fish which was such a terrifying prospect for the fish that they would swim near to the surface of the water, basically trying to escape. All that did was enable brave sailors to profit by making an easy catch. Nice choice, the Kraken or the fishing net! But the real kicker for the fish was that once the Kraken had eaten and digested them, it would poo out its waste but this waste would be so irresistible to the fish (seriously who came up with this theory?) that they were attracted back to the vicinity of the Kraken so that the cycle was put on repeat.

Much of this was noted, albeit rather less sensationally, when the Kraken made an appearance in scientific journals, which it did quite frequently. The first is dated to around 1250 and describes the Kraken in great detail. It also comments on the monster’s unique feeding habits but has a slightly different twist; it claims that the Kraken would regurgitate food particles from its mouth into the sea. Fish would be attracted to the food and swarm to feed. The Kraken could then scoop up the school of fish in one gulp. Is that less disgusting? Not sure.

When Swedish botanist and zoologist, Carl Linnaeus first undertook the task of classifying all living creatures on Earth, he also included the Kraken. The 1735 edition of his Systema Naturae has an entry for the Kraken, which he categorized as a cephalopod and named Microcosmus marinus. Subsequent reprints omitted the Kraken entry which was a shame. Perhaps that’s because, in another work, Linnaeus noted that the Kraken was a ‘unique monster that inhabits the seas of Norway, but I have not seen this animal.’

Nonetheless, it appears again in a description by the Danish historian and bishop, Erik Pontoppidan in his Natural History of Norway from 1755 which includes, by the way, mention of a ‘strong and peculiar’ scent that is particularly alluring to fish.

Pontoppidan didn’t go overboard (pardon the pun) in his claims about the terrifying nature of the Kraken, which, unfortunately cannot be said for Pierre Denys de Montfort. Granted he had figured out that, surprise, surprise, the Kraken was either a giant squid or octopus, and indeed he is known today for his pioneering inquiries into the existence of the gigantic octopuses.

Montfort turned out, however, to be a bit of a sensationalist. He claimed that ten British warships that had mysteriously disappeared one night in 1782 must have been attacked and sunk by giant octopuses. Unfortunately for Montfort, the British knew what had actually happened to the ships, and called him out on his claims. Suffice to say, his career went down the pan and never recovered. 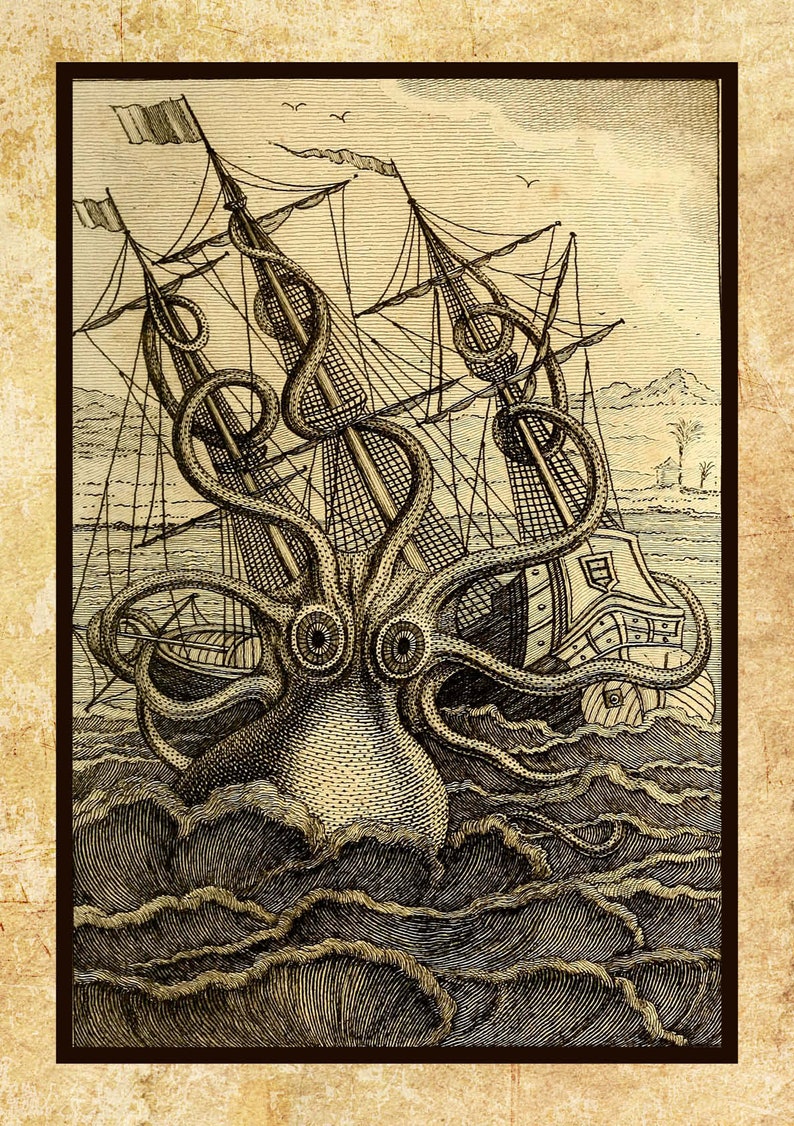 Not so for Jules Verne who’s original edition of 20,000 Leagues Under the Sea included this illustration which pays homage to the Kraken.

So what was reported by the bishop who took mass on the island all those years ago? The description of the ‘emissions’ and the numerous tentacles suggest that it might well have been an octopus or a squid, and indeed several have washed up on northern shores over the centuries. As they are soft-bodied cephalopods, however, they wouldn’t leave behind fossil evidence so who knows? 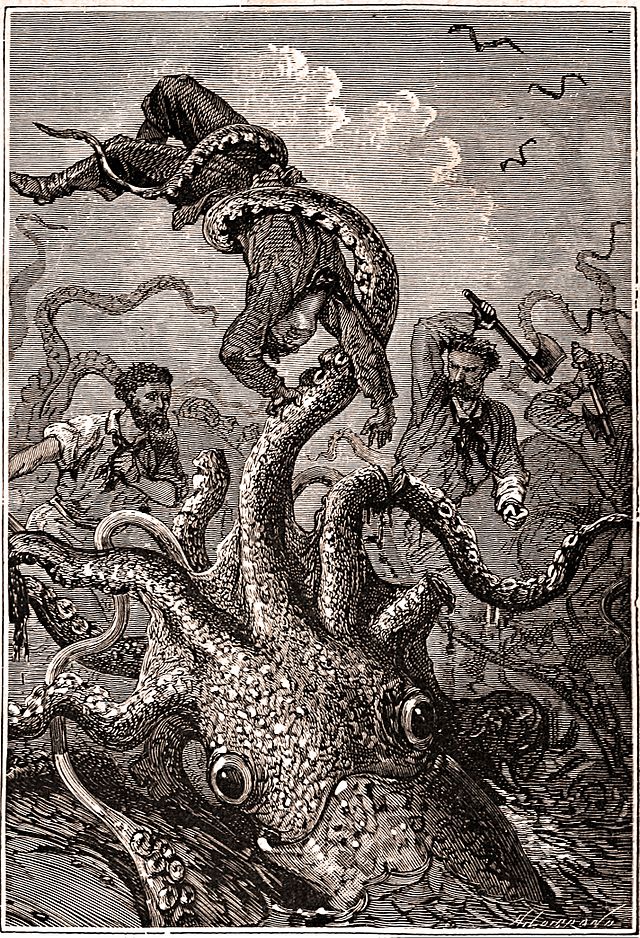 The crew of Nautilus battles a giant squid in Jules Vernes 20,000 Leagues Under the Sea, illustration from original 1870 edition