The fourth work in the Marriage a la Mode series is ‘The Toilette’. In the last painting Viscount Squanderfield was seen at the dodgy doctors. Here, back at the Squanderfield residence, the Viscountess is having a high old time. 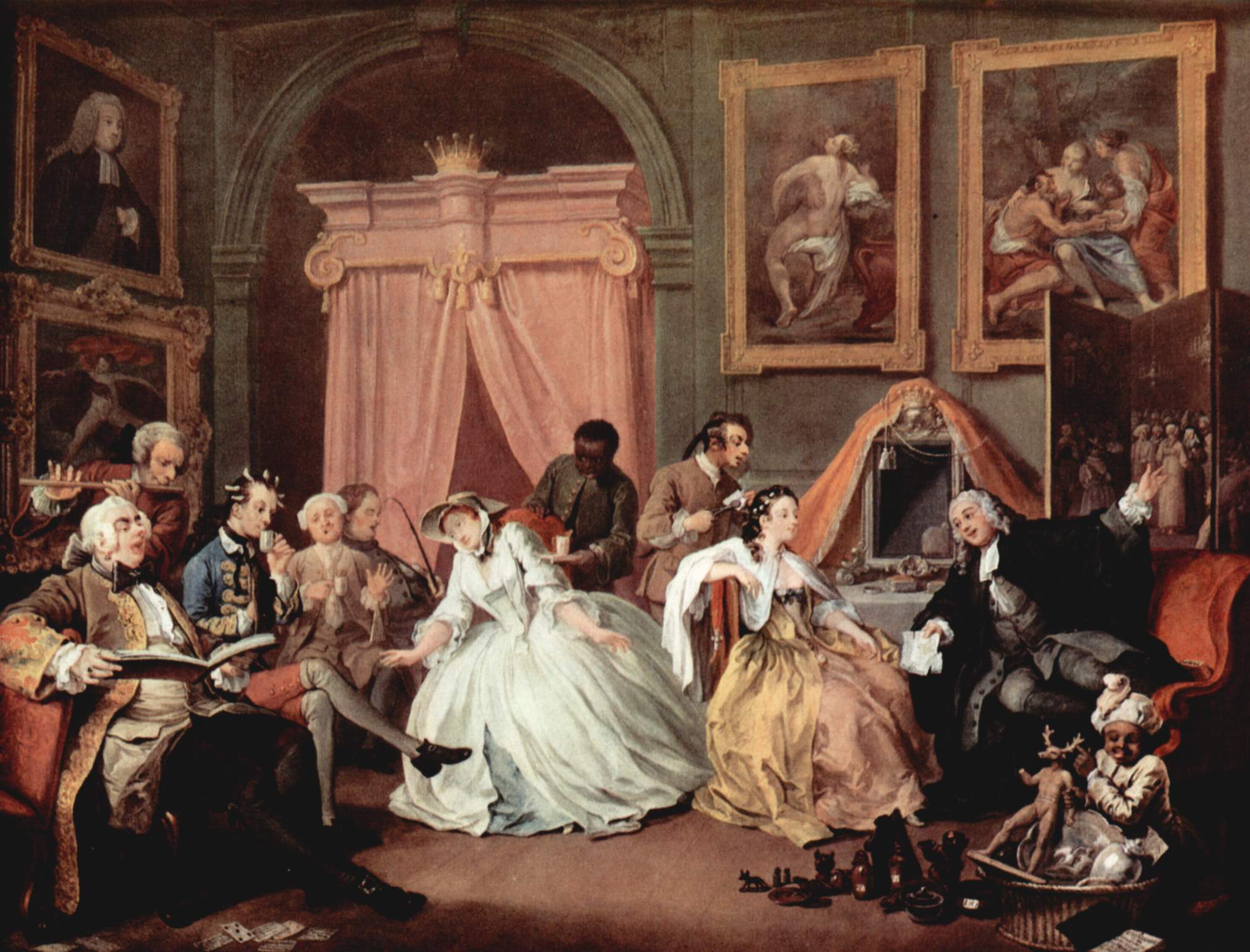 We are once again in a bedroom, and there above the bed is a coronet (there’s one on top of the canopy in the first image as well) which signifies to those in the know that the couple are now the Earl and Countess of Squander, meaning that the old Earl has passed away. They are clearly proud of their new status as the Countess is also displaying the coronet on her mirror of her dressing table.

They have a successor too – on the back of the Countesses chair is a coral teether. 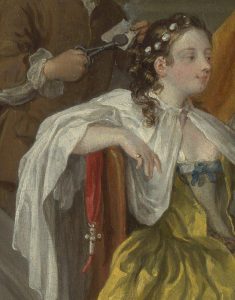 I have to say, however, that the Countess doesn’t look the maternal type. She’s surrounded by an interesting array of visitors in the manner of the French aristocracy who would receive visitors for the grand levée which was made famous by Louis XIV and followed a strict protocol that denoted rank and status depending on the role you were given. Basically it was people helping the King or Queen get ready for the day in front of an audience. So far so pretentious. We know that this is morning because her guests are being offered hot chocolate and the countess herself is having her hair curled.

What a morning this is! It’s definitely not for anyone who needs peace and quiet before their cornflakes. The opera singer to the left is probably a castrati, possibly modelled on a famous singer of the day, hired along with his flautist to entertain this motley crew. Judging by his sumptuous attire and abundant jewellery, I think we can assume that he’s well paid and therefore expensive to hire.

It’s a mixed response from the guests. The gentleman in the middle is enraptured. I wonder whether he has made a trip to Dr Pillule at some point because he is suffering from syphilis too judging by the black spot on his face? The lady in white is practically swooning and completely absorbed so that she doesn’t notice the manservant trying to offer her a cup of chocolate. On the other hand the guy with the riding crop (!) is fast asleep. 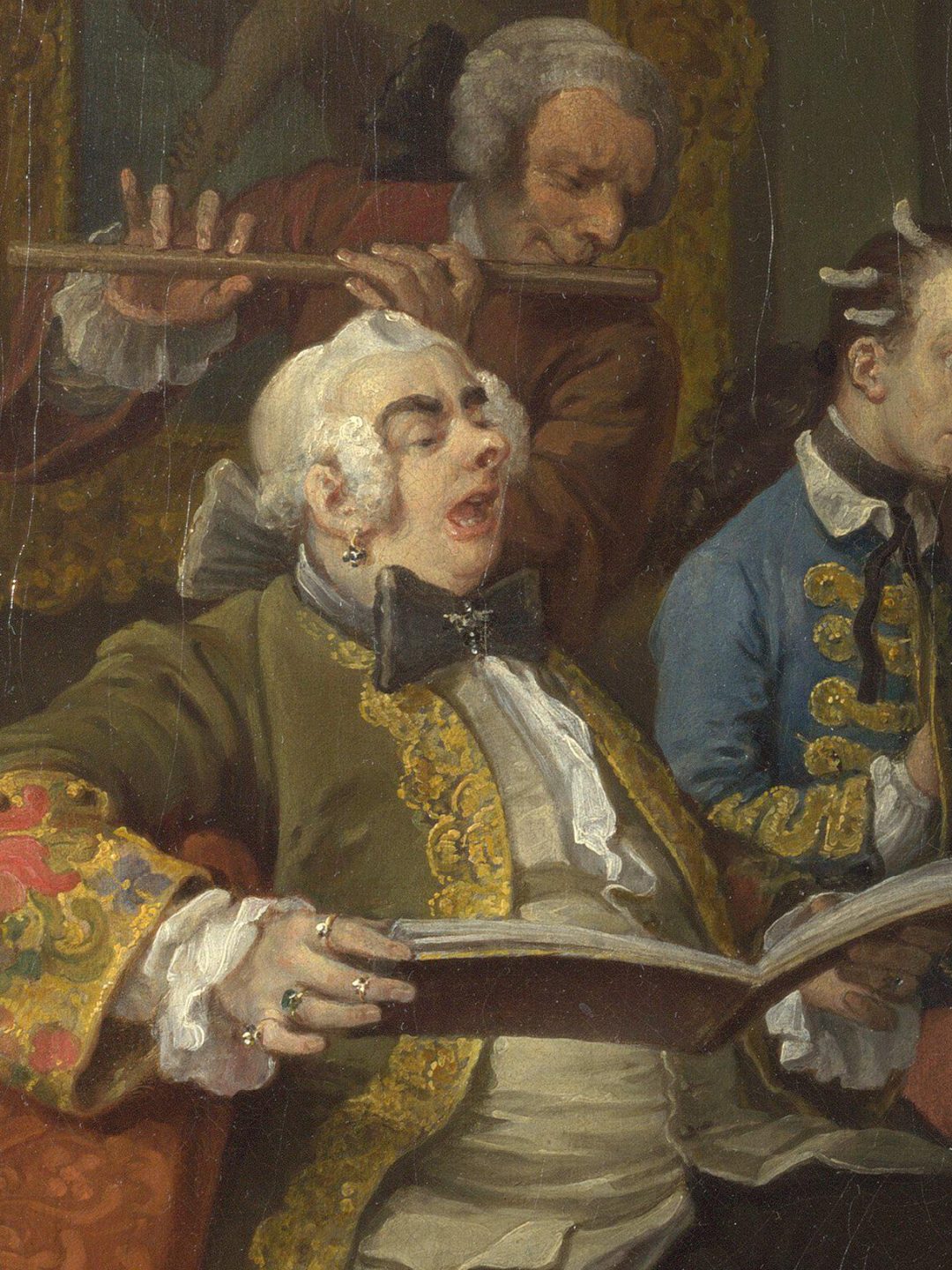 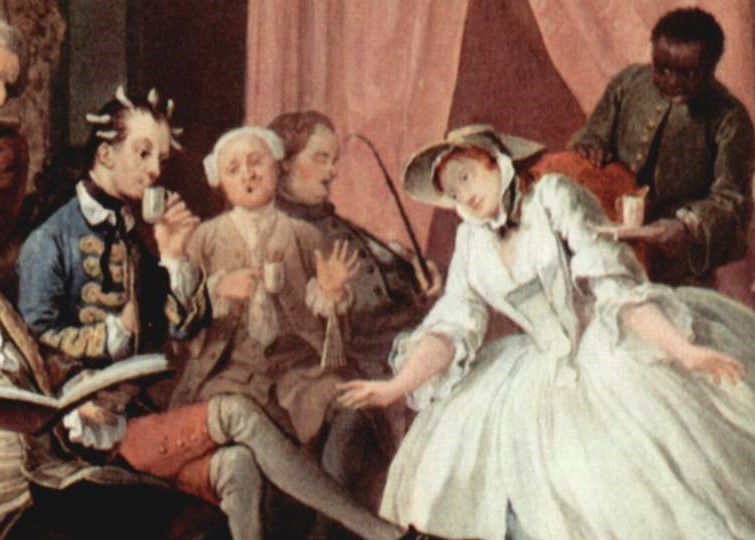 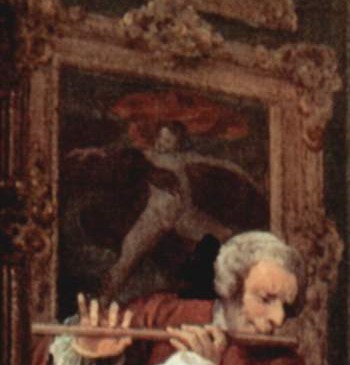 The fellow with the curling papers in his hair is delicately sipping his chocolate whilst absorbed in his thoughts. Hogarth makes it pretty evident that he won’t be dreaming of young ladies: the image behind him is very like Michelangelo’s Gannymede which is the story of how Zeus fell in love with a beautiful young boy who he abducted in the guise of an eagle. Despite the shock, Gannymede became his cupbearer and constant companion.

And what of Countess Squanderfield, is she enjoying the performance she’s paid such a lot of money to hear? Er, I doubt she is even aware of it, so mesmerised is she by the fellow sitting to the right of the image. He’s made himself properly at home with his feet (rudely) on the sofa, and is obviously well acquainted with the lady of the house as he holds out an invitation to her and gestures towards the screen behind him. The screen shows a couple dressed as a friar and a nun attending a masked ball, suggesting that he is inviting her to a similar event and that he has even thought about the costumes they could wear. Do you recognise him? He’s Silvertongue the lawyer who was so solicitous in the first painting of the series. It’s quite evident that they are close because the portrait on the wall above Gannymede is of him. Was Squanderfield too absorbed in his own shenanigans to notice or doesn’t he care?! Hmmm. 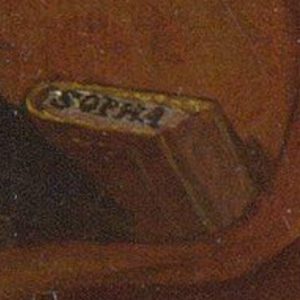 Speaking of classy, the countess still loves her tat. In the foreground is a collection of bibelots still with auction numbers attached. The catalogue is in the bottom right corner beneath the basket the contents of which are being enjoyed by the young black boy wearing a turban. This is another crass opportunity for the couple to demonstrate their wealth and fashionable status as it was popular for wealthy households to have black pageboys and to treat them as part of the family almost as a pet until they tired of them. 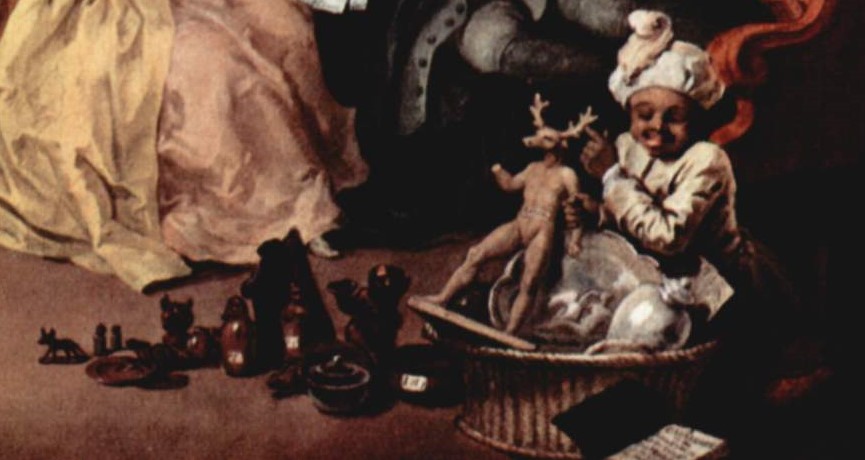 The final two aspects to mention are the invitations mixed in with playing cards strewn all over the floor – clearly the Countess is part of the fast set – and the final two paintings on the wall, both of which are recognisable as works after Corregio. 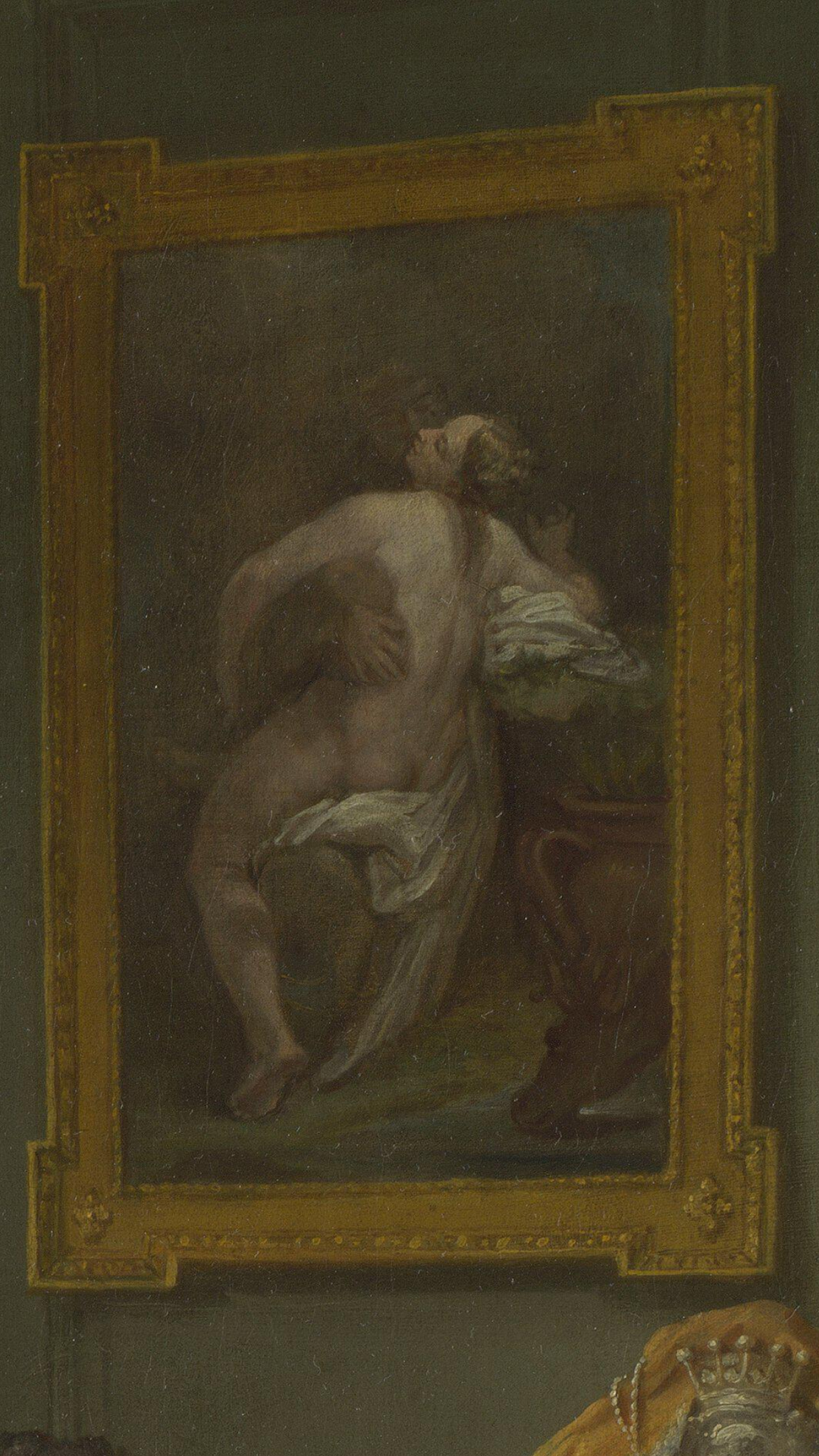 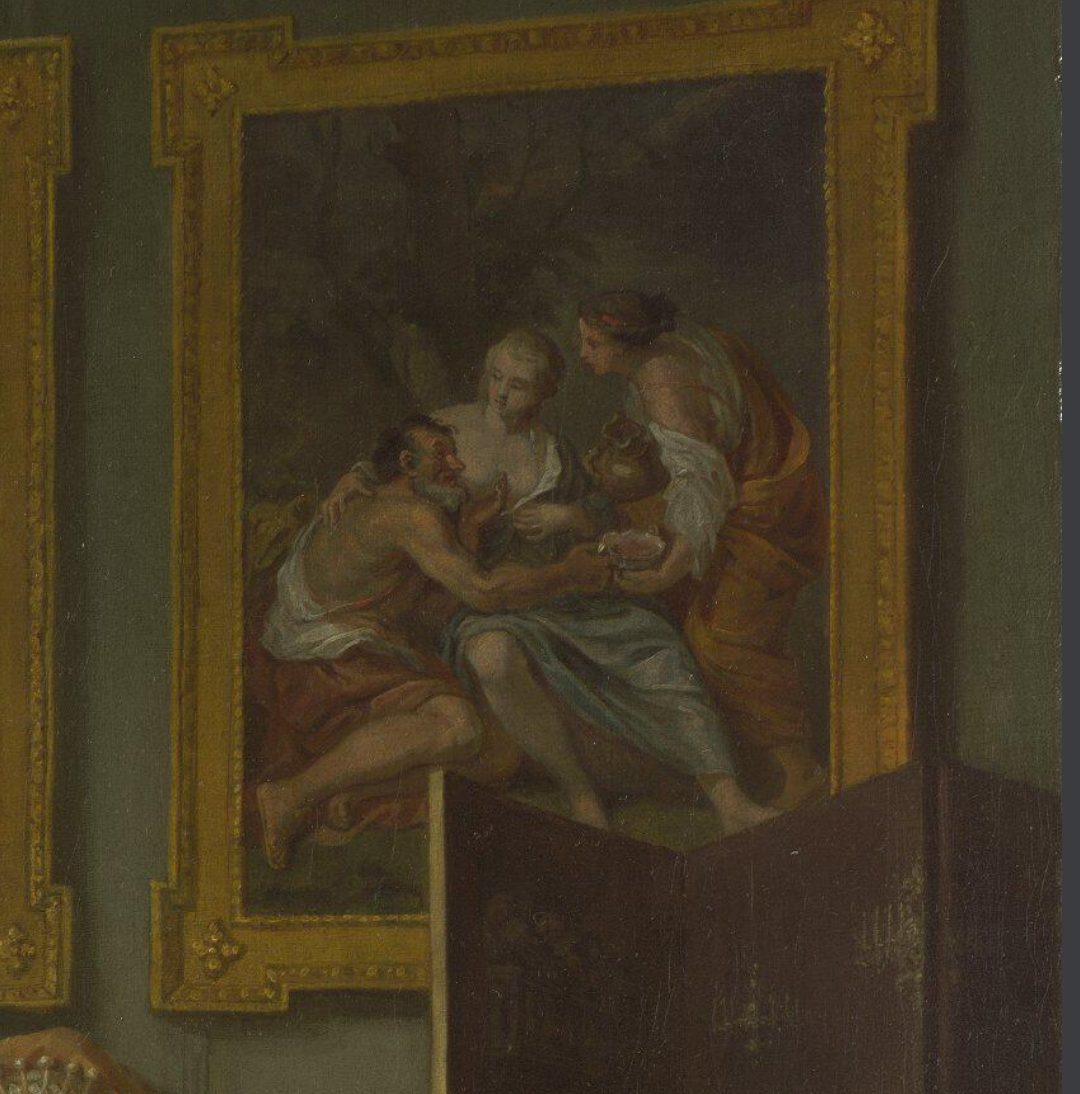 The image on the left is Io being seduced by Zeus disguised as a cloud this time – note that this is also about disguise and masquerade.

The image above is Lot and his daughters. They believed that the world had been destroyed and got their father drunk so that he would sleep with them and perpetuate the human race. I’m not sure about the meaning of this with the reference to incest, perhaps it’s more about family betrayal and there’s plenty of that going on, right from the start!

If you’d like to know more about the story of Diana and Actaeon, I discuss Titian’s rendition of the myth in my poesie series. They are all available to watch on the ‘Free Art Videos’ page, but to make things easy, here are the specific links:

The story of Diana and Actaeon

An analysis of Titian’s Diana and Actaeon

The strange biography of Titian’s painting of Diana and Actaeon