Viscountess Squanderfield is absent from Hogarth’s Marriage a la Mode – The Inspection, the third painting in the series. And my goodness, doesn’t Viscount Squanderfield look all the better for it? The arranged marriage of an exchange of money for title and the separate lives he and his new wife are living in gloriously bad taste all seem to be set aside here. However, no one else in this image is in quite as marvellous spirits; that’s unsurprising because we’re actually in a doctor’s surgery. 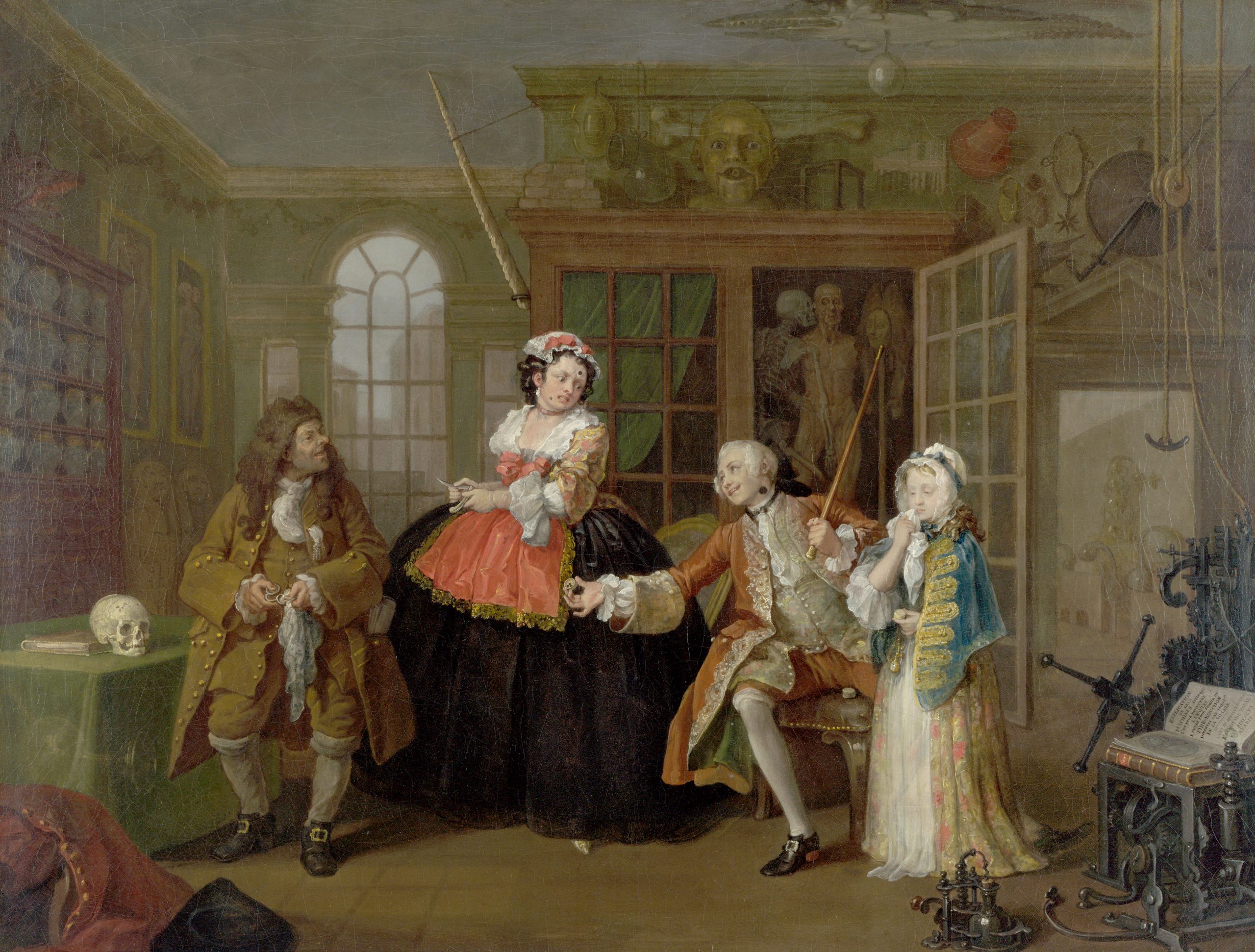 We’re in the consulting room of one doctor La Pillule (Dr Pill) along with a pretty angry looking lady who’s flicking open a pocket knife, Squanderfield and a child.

It doesn’t take too much to work out what the trio are doing there, and Hogarth has given us some very good clues as to the relationships between them.

Let’s take the Viscount first. We know that he has syphilis; the black spot on his neck in the first image of the series is ever present. He’s holding out a pill box containing three black pills. 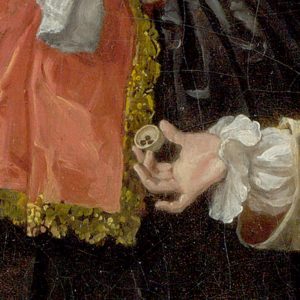 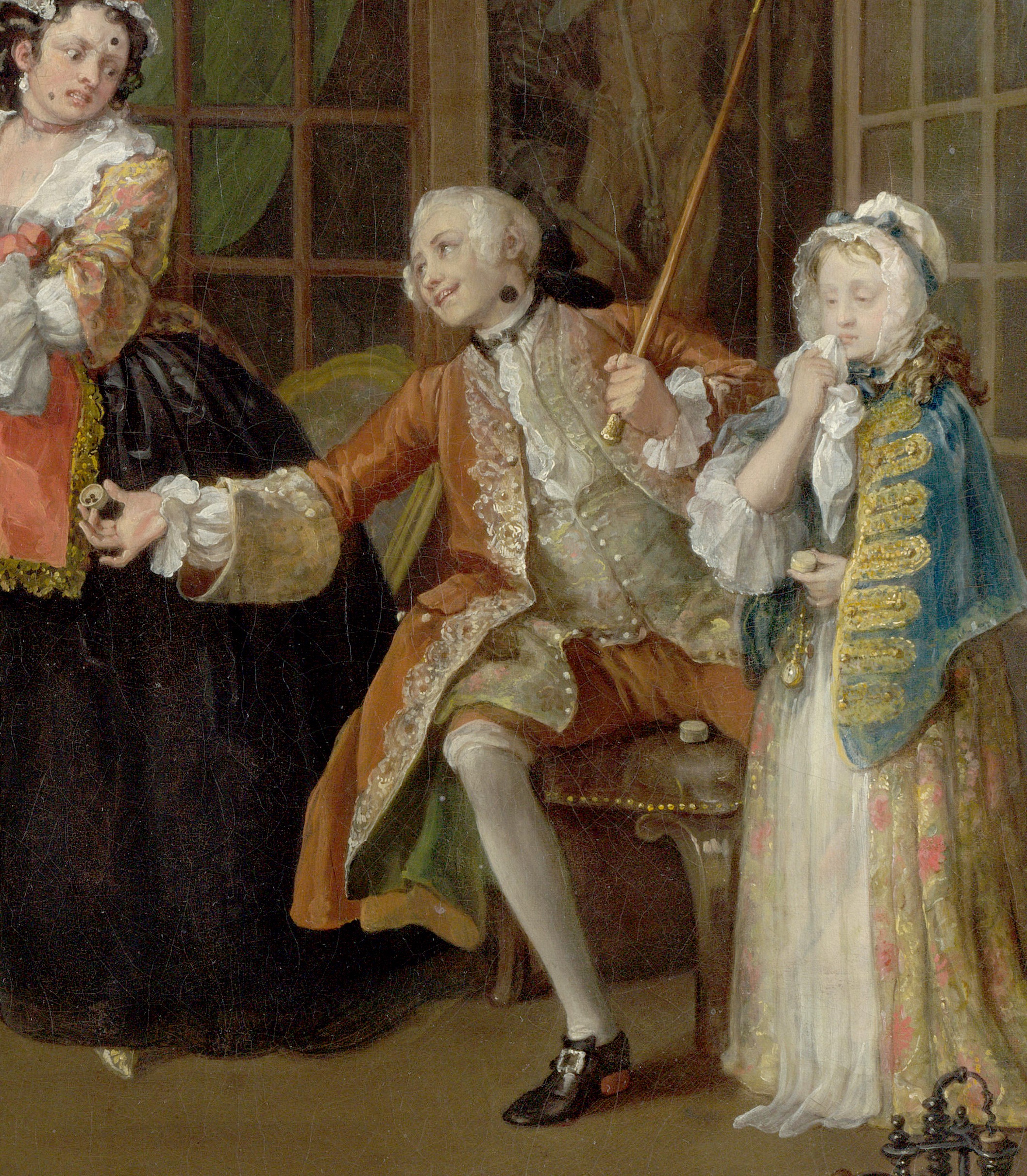 There’s a very similar box between his legs right by his groin, and the young lady, who is also positioned between his legs, holds a third identical box (or one of these is the lid). The suggestion is that they’re in it together, that he has passed on the disease to his young mistress and is now taking a passive aggressive approach to the doctor as he explains that his mercury pills aren’t actually working and perhaps the doctor could find a different cure. Good luck with that one!

The lady in the centre is looking back at him possibly as though he’s an absolute idiot (which frankly he is because mercury pills were just about the only known cure for syphilis), or it has been suggested that she’s mad at him because he may have just accused the girl of passing the disease to him rather than the other way round. There’s the possibility, too, that the doctor has just made this very same accusation. Whoever it is pointing the finger, or not, she’s reacting strongly. Why would she care? She cares primarily because this would be very bad for business. I think it’s safe to assume that she’s the girl’s madam. The lady herself has been branded, quite literally, as a prostitute. She has ‘FC’ for ‘female convict’ tattooed just above her left breast, plus there’s something quite bawdy about her dress and demeanour, not to mention that she has those ubiquitous black spots too. 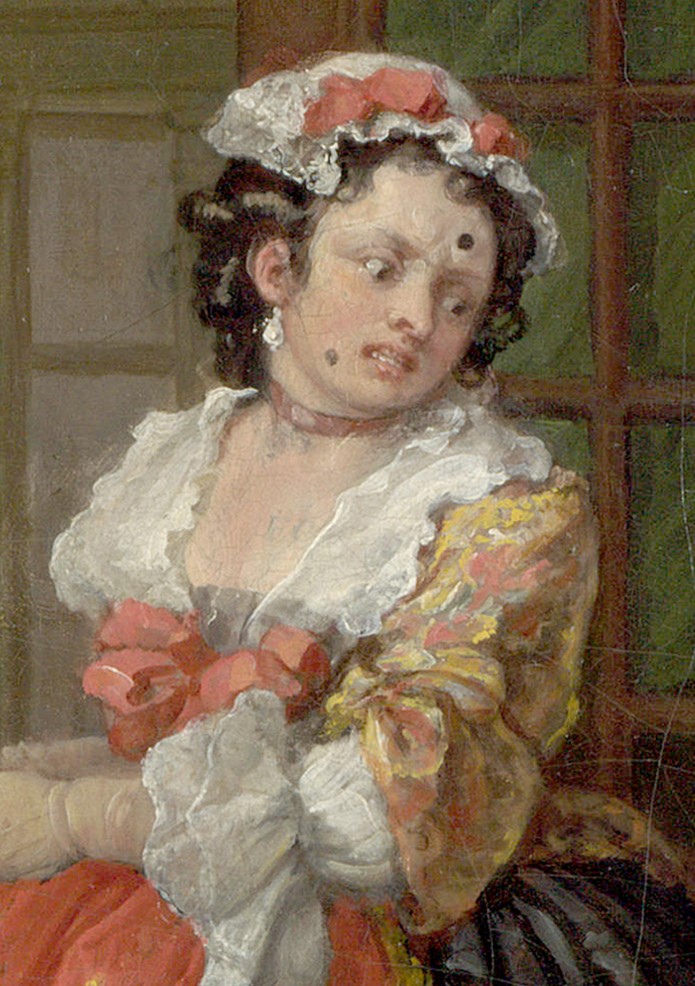 There are two factors that make this situation even worse: if she’s so cross that the Viscount has accused the girl of passing on the disease, the inference is that she probably sold her as a virgin; and it’s likely that she’s the girl’s mum. Look at the brocade on the woman’s sleeve and compare it to the girl’s skirt. They are made out of the same material. It subtly binds them together. The poor girl has been forced into the same profession as her mum, by her mum, and cuts quite a tragic figure, her clothes are a bit too big for her, she’s dabbing at her lip, perhaps at a sore, with her hanky – Hogarth excels at the little details.

So, in this room full of lies, accusations and tragic figures, does the doctor stand apart as an honest and moral figure? Does he heck! Look at the state of him! 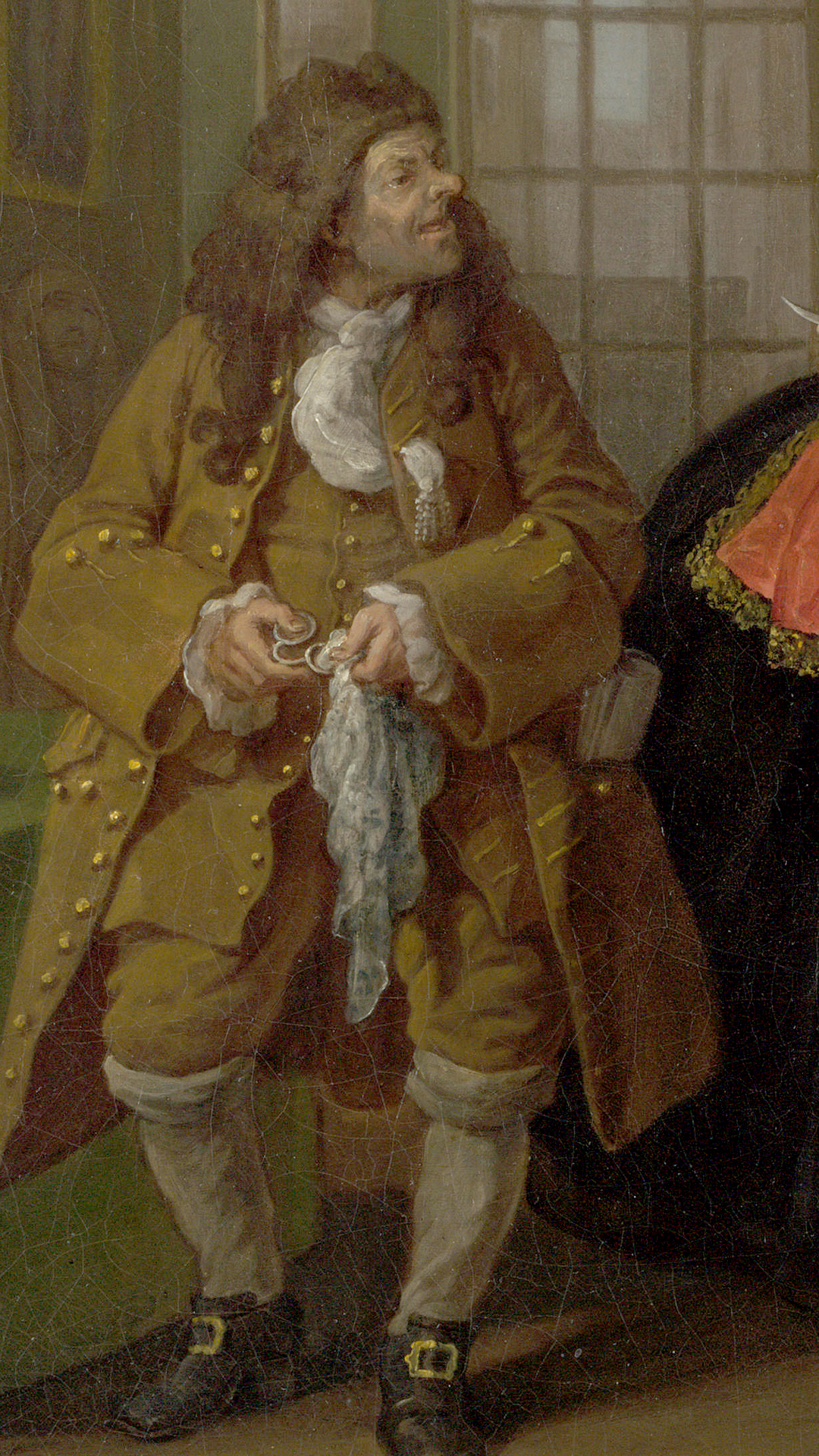 For a start he looks as though he’s been on the 18th century equivalent of special brew for at least 30 years but it isn’t just that that gives him an odd look. The large forehead, the bridge of his nose that seems to have collapsed, the fact that he doesn’t seem to have any teeth and the extremely bandy legs are all indications that he has…guess what? Congenital syphilis. Even the skull on the table to his right is full of holes suggesting that it has been eroded away by the same disease. 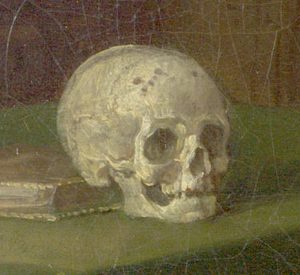 As ever with Hogarth the room is another protagonist in this sorry tale.

Surely you’d steer clear of a room in which a skeleton was wrapped suggestively around, not to mention groping, an anatomical model whilst a wigged mask broomstick looks on? I love the look on the anatomical model’s face but if illicit sex isn’t tangoing with death here, I don’t know what this is about! BUT the position of the trio behind the Viscount insinuates that this is going on behind his back. Does this reference the young girl or perhaps his wife, or even both? I love the way that Squanderfield pretty much points out this little vignette with his cane, even if this is unwitting on his part.

There are all sorts of other random objects that tell us that Dr La Pillule has a rich and versatile professional life. The contraptions to the right, according to the open book are his own inventions. One is to reset your shoulders and the other is a cork screw. Rather like the image of Medusa in the first painting, there is a creepy head on the shelf that looks as though it has a bone going through it although if you look more closely it’s clear that the bone is attached to the wall. The National Gallery suggest that the head could have been used as an apothecary’s shop sign which tells us that the good doctor is  a chemist too. It would seem, however, that now he’s so sure of receiving customers that he no longer needs to advertise. Either that or he’s under the radar? 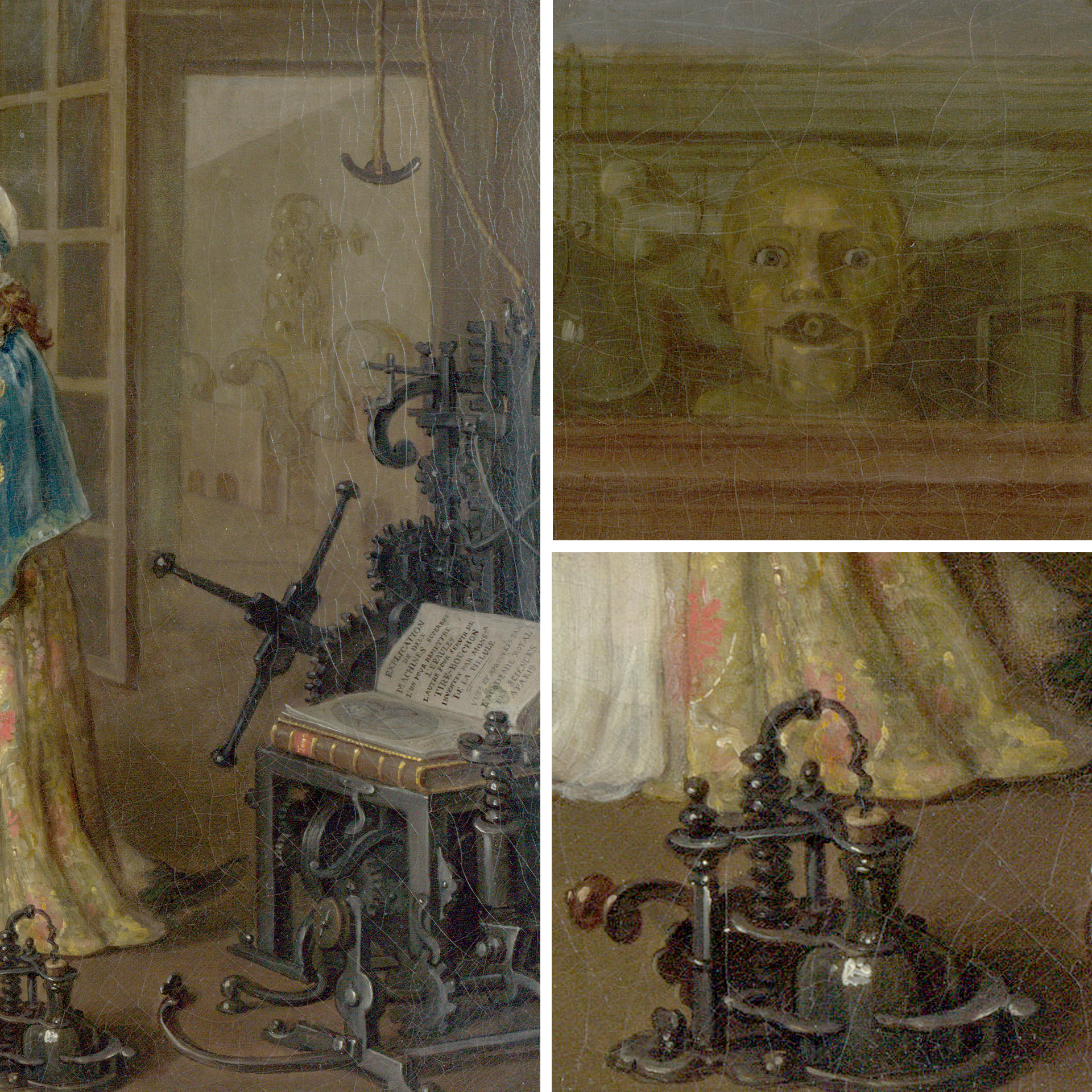 Whatever the situation, I think it might be just about to get worse for the young lady. Dr La Pillule is gearing up for an inspection by the way he’s polishing those glasses. The image, after all is entitled ‘The Inspection’. Poor child.