Marriage a la Mode – The Bagnio 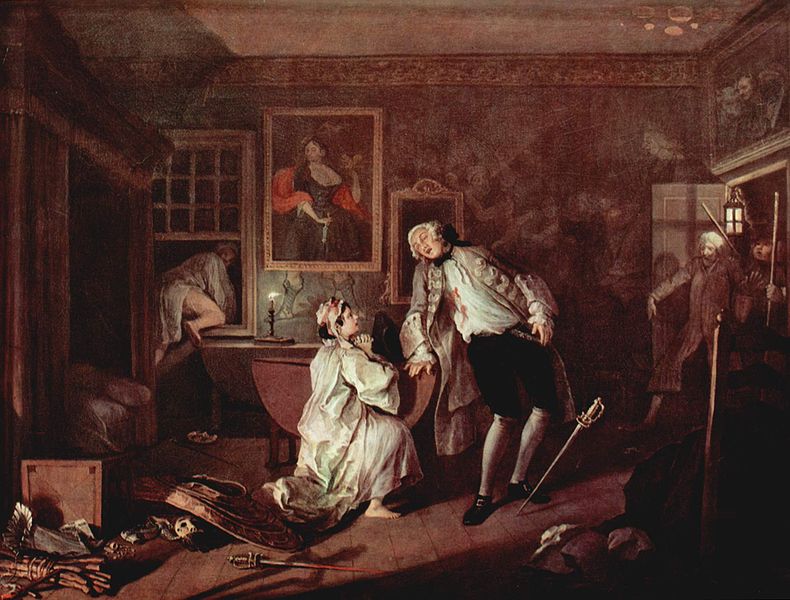 I don’t want to use my imagination too much here because this isn’t a scene I want playing in my head but clearly things were a bit frenzied when they got to the room. There are clothes strewn everywhere, her shoes have been abandoned next to a mask and the invitation to the ball, her corset has also been discarded and has landed on top of a bundle of sticks meant for the fire. This bundle of sticks was also known as a bundle of faggots, faggot being a derogatory term for a prostitute so Hogarth is giving us more than a nudge as to what he thinks of all this carry-on! 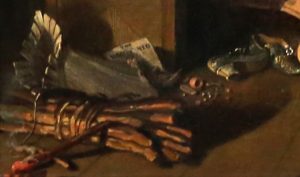 You might notice too that a ribbon from the corset is beginning to smoulder. This is not a reference to how sexy and smouldering the couple are but a reference to a proverb ‘kindle not a fire that you cannot extinguish’; a warning that I’m going to say comes rather too late judging by the state of the bed!

Anyway, somehow the Earl has burst in on the delightful pair. Has he been told of their tryst or did he just happen to wandering by the same bagnio?? Who can say?! What we can say is that it’s likely he wished he hadn’t because now he’s been stabbed by sleazy old Silvertongue who is showing us his best side as he scarpers out of the window in his nightshirt. What a sweetheart. 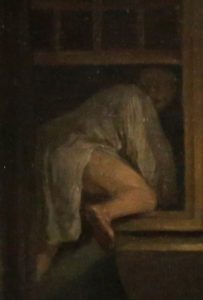 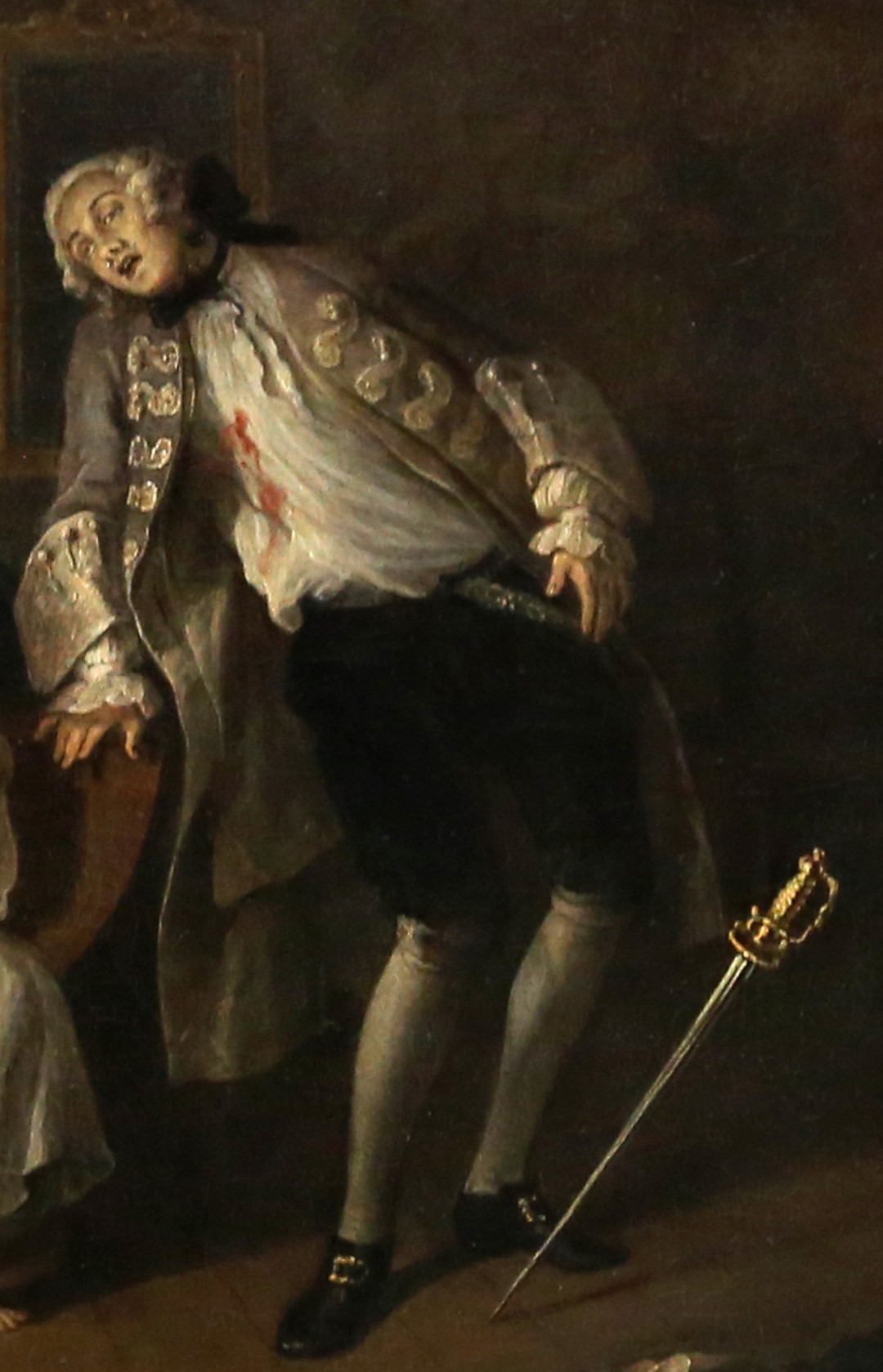 The Countess is suddenly contrite and begging forgiveness on her knees with Silvertongue’s blood soaked sword next to her but I don’t think that’s uppermost in the Earl’s mind as he slides dramatically to the floor. At least he didn’t die of syphilis in the end (although the reminder that he has it is ever present)! It’s been pointed out that his head is framed by a mirror, a reminder of his vanity in the first painting where he only had eyes for himself.

He evidently hasn’t gone quietly either as the proprietor has alerted the local constabulary and they make their appearance at the door over to the right of the work. 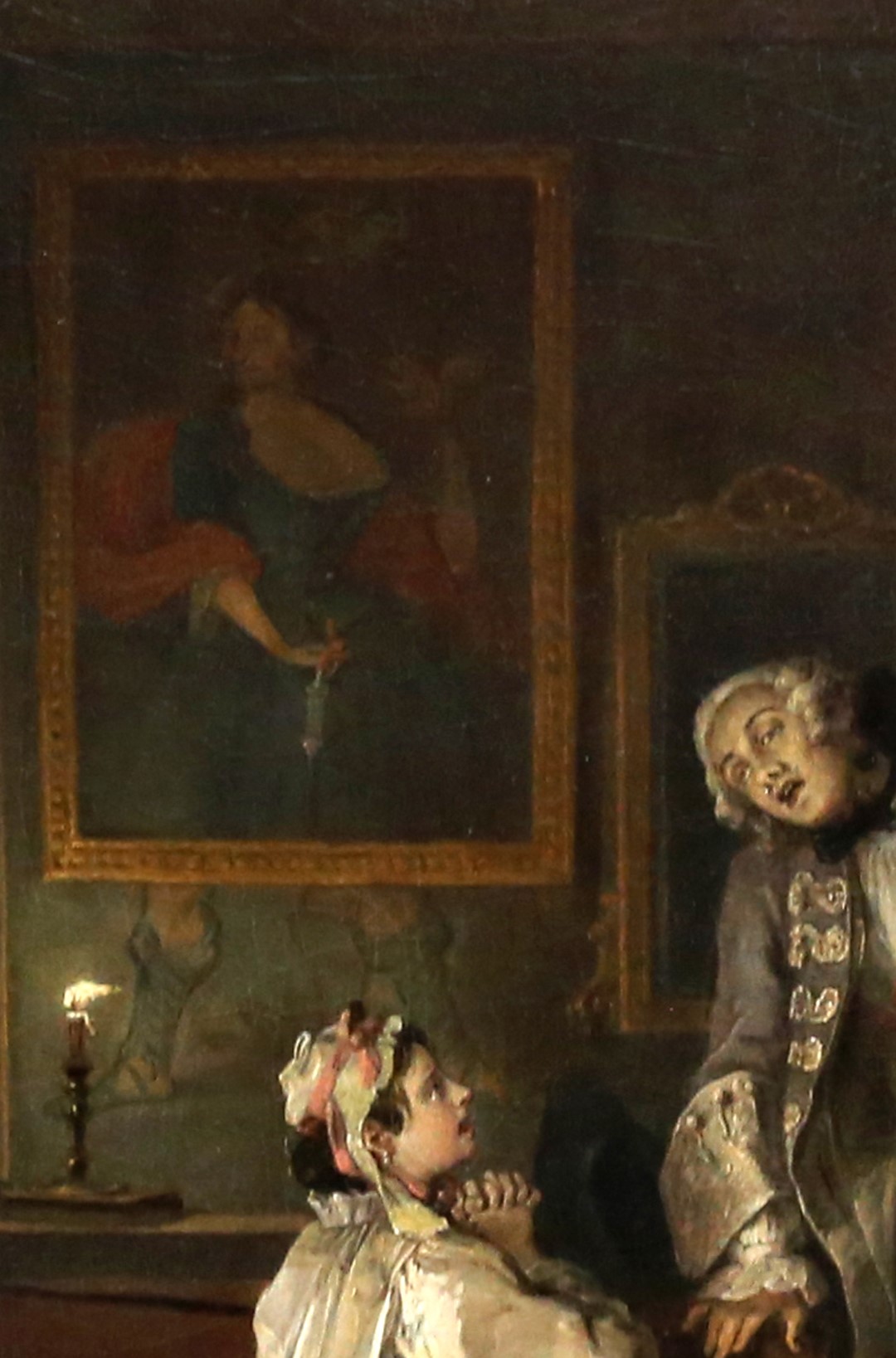 Now, I have never been in a room that might be rented by the hour but I don’t imagine that they would be lavishly furnished with works of art. So what, you might wonder, is the deal with a wall that is not only adorned with a tapestry, but has works of art hanging over the top of the tapestry. Tapestries weren’t cheap either!

The tapestry is of the Judgement of Solomon who carried out a novel maternity test on two women both claiming to be the mother of the same child. He suggested that the baby get cut in two so that they could have half each. Obviously there was no way that the real mother would let this happen. I’m not sure whose body the portrait of the lady obscures but the work has been strategically placed for comic effect (note where the parasol she’s holding is positioned) and as yet another dig at Countess Squander because she’s holding a squirrel which, guess what, was also slang for a prostitute.

Apparently these legs are rather similar to those of an engraving of Samuel McPherson who, at the time that Hogarth was painting Marriage a la Mode, became infamous for being shot for desertion. No surprise that they are right next to the rather less attractive legs of Silvertongue.