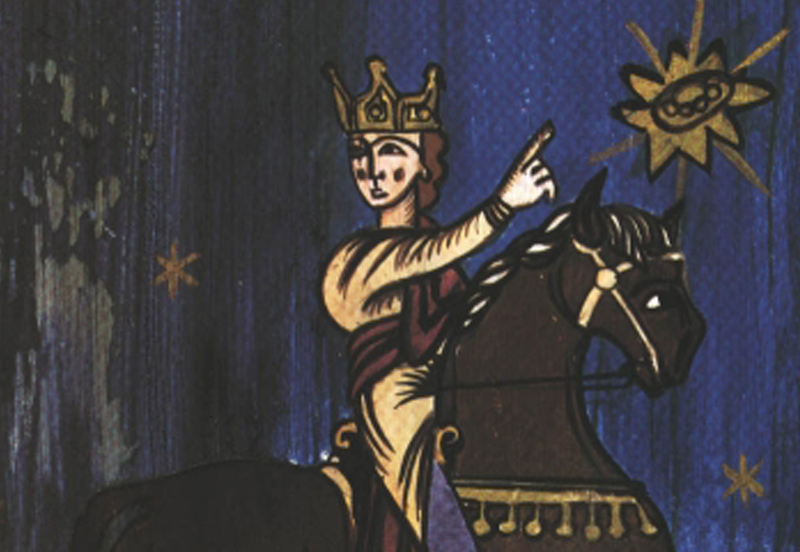 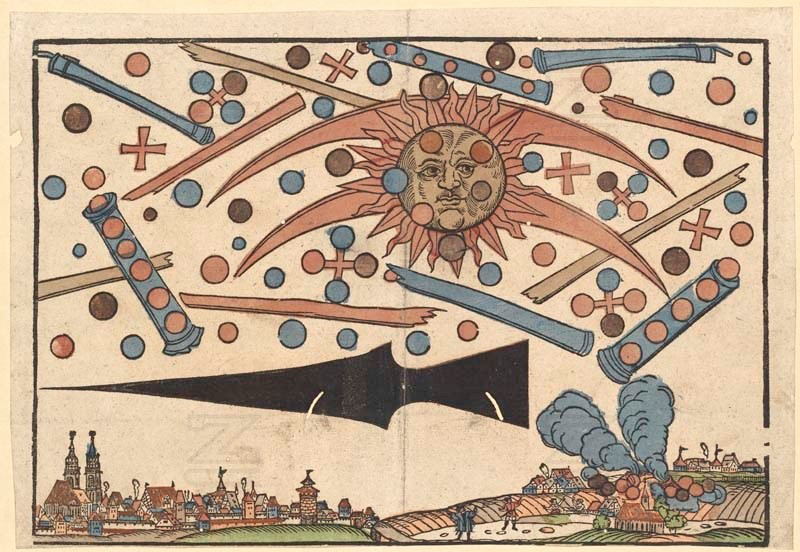 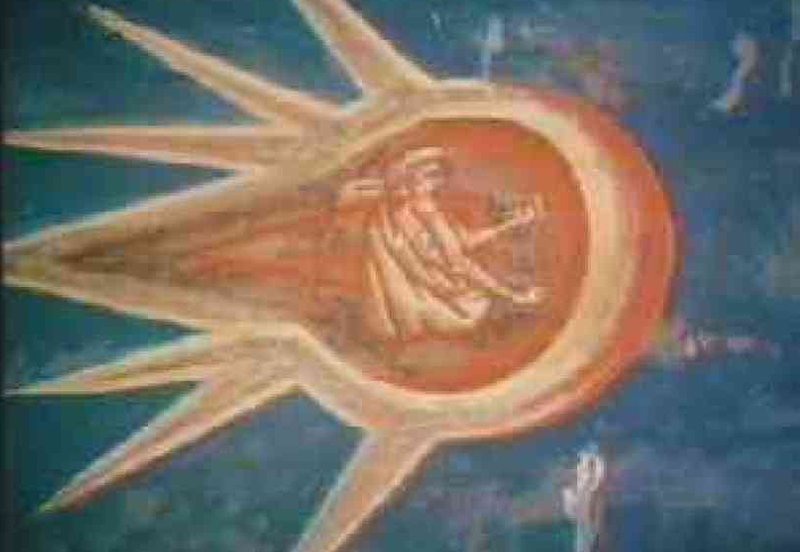 Alien invasion!! Ladies and gentlemen, the aliens have landed but they haven’t JUST landed, they arrived yonks ago and were best mates with Moses who could have also been one of them! 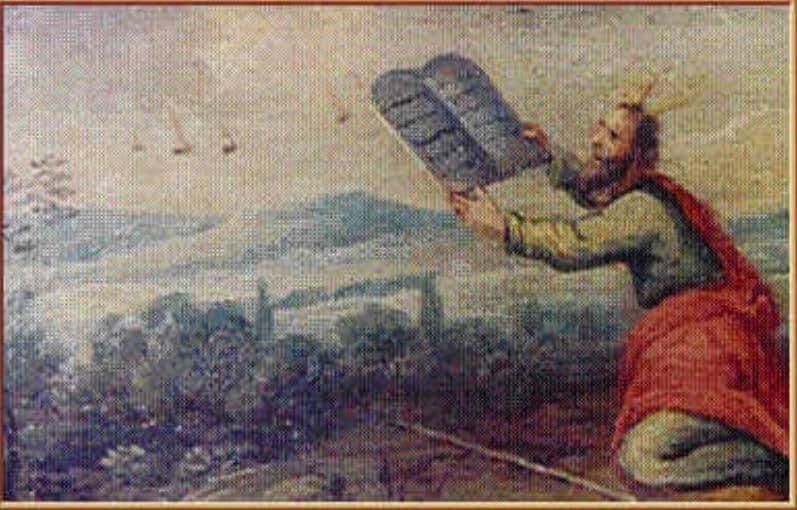 I love the idea that Moses was an alien life form or at least fraternised with them which brings me to this image, which, as far as I can make out, is secreted away on a drawer in a castle in Belgium.

Here he is with his tablet and for my money, no less than four flying saucers. This may also be an early depiction of  a cable car but that idea hasn’t taken off (no pun intended!).

If we think of the story of Moses, according to the Old Testament, he had a chat with a burning bush. Who is to say that the burning bush wasn’t in fact a UFO which had perhaps landed in a volcano? Was Mt Sinai on the site of a volcano? Possibly! He came back, after a second visit, I might add, with some pretty good commandments. I have a theory that he was supposed to write them down as dictated by the aliens on the first visit but forgot because he was either having such a great time with old friends, or because he was so freaked out by the helpful, friendly aliens. My imagination tells me that they had to summon him back to give him the list they’d prepared for him when they realised that he might not get it right. He needed to get it right because the aliens were setting down the tenets of Christianity!

The thing is, is that this is a fairly established theory (apart from my reasons as to why he returned twice) and I, for one, can’t disprove it. Are these space ships in this image? They could well be.

What I can say with a little more certainty is that, yes, Moses does have horns in this image. St Jerome had some trouble with the translation here. The term that he was looking for was probably something more like ‘radiant’ but in Hebrew the word can also mean ‘horn’ so unfortunately Moses ended up with a horned face rather than an ethereal radiance as he returned from Mt Sinai. 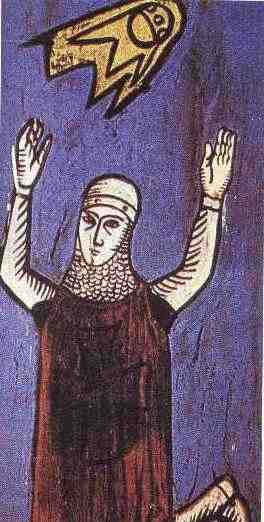 Our friends from Mars, or from where ever they hail, also visited us in 776 as detailed in the Annales Laurissenses to see off Saxon crusaders during a siege on Sigiburg Castle in France.

Picture this: the godly, Christian French are in the castle surrounded by ungodly, smelly marauding Saxons. Fighting is at its peak and the Saxons are about to take the castle when a very dashing French chap, perhaps even the King of this castle (although as accounts are sketchy who really knows?) spots something in the sky.

That ‘something’ is joined by a similar object, helpfully pointed out by a blank faced but surrendering Saxon. According to a contemporary account, people watching from the town square “saw something resembling two large flaming shields of reddish colour moving above the church itself.” The Saxons thought that the French were protected by the UFOs and they fled, saving the castle. Intervention from God or by aliens??

This is a newspaper cutting of sorts from 1561. The image is a woodcut created by Hans Glaser and it depicts an event that took place in the wee hours of April 14, 1561 in Nuremburg.  The sky is full of strange objects, some of which also seem to have crashed to the earth. According to contemporary descriptions, there were a lot of things flying around and a lot of smoke. The general consensus was that it was a sign from God and folk on the ground were certainly upset but I love the fact that they all managed to get fully dressed!

Modern scholars and sceptics have wondered if the account was figurative or potentially describe a solar or lunar phenomenon such as a sun dog, in which the sun’s light appears as a halo around the sun, even creating spots of brightly shining light around the sun. 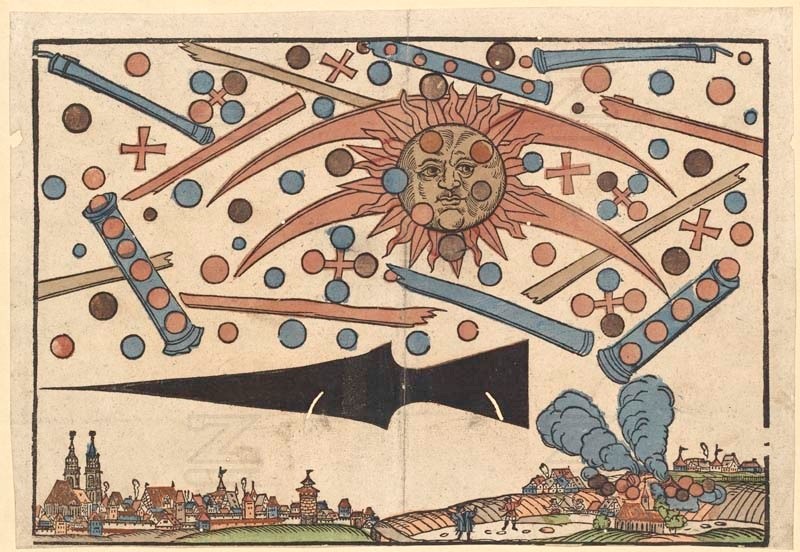 I’m going to end this post on this image of a fresco.

This is simply called “The Crucifixion” and it’s a fresco in a monastery in Serbia. Painted in 1350, the artist has signed his name ‘Serdge’ but there are sadly no further records of him. 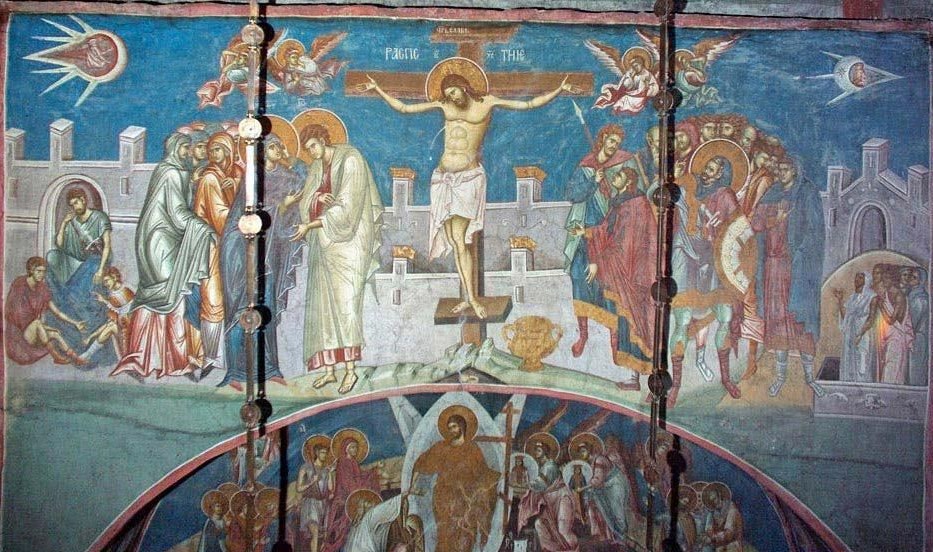 Fresco by Serdge, in the Visoki Decani Monastery in Serbia

Now Serdge probably didn’t have that much say over what he actually depicted so it seems that he was told to show what looks to be a couple of angels in spaceships top right and left by the monks who commissioned the work.

No matter that spaceships didn’t exist in 1350!

Shall I quietly mention that Byzantine scholars believe the little space-angels to actually be human representations of the Sun and the Moon. They were, they think, included to demonstrate that even celestial bodies were impacted by the crucifixion.

I know what I think but I couldn’t possibly influence you! 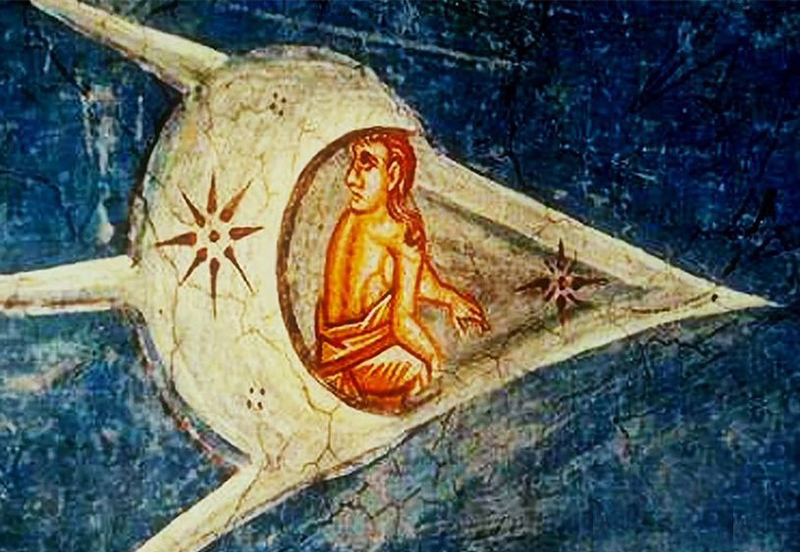