Oh yes, the fresco cycle in Santo Stefano Rotondo is a real gorefest! The frescoes were created in around 1582 at the height of the Counter Reformation and meant to inspire Catholics to martyr themselves if necessary in the fight against Protestantism. There are reports of over-zealous would be missionaries flogging themselves to death in front of the frescoes so I suppose something worked. 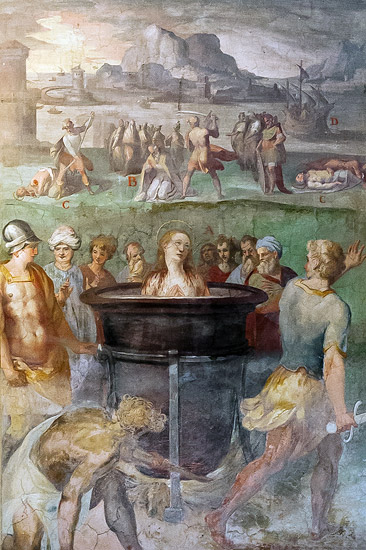 Here’s St Cecilia. According to her legend, she was married against her will to a Roman pagan named Valarian. On her wedding day she heard angels singing and when it came to the moment that their marriage was to be consummated, she told Valarian that if he touched her that would not be good AT ALL. Angels can be pretty mean when it comes to looking after their own! On the other hand, she said, if he heeded her wishes he too could see angels. Somewhat surprisingly Valarian listened, had an angelic visitation and was persuaded to convert to Christianity. He loved it so much that he also converted his brother.

The enthusiastic new members of the flock preached Christianity whenever they could and were soon beheaded for their troubles. Cecilia, however, suffered even more. She was condemned to be boiled to death but after a day and a half in boiling water she wasn’t even tepid and an executioner was discharged to behead her. In many versions of the tale her severed head continued to preach for several days until she finally went to meet the angels who had so often sung to her. St Cecilia is now the patron saint of music.

The background to this fresco depicts the horrible sight of her husband and brother in law getting their heads chopped off. Just what you want in a church that has become hugely popular for concerts and weddings. St Cecilia must be delighted with all that music.

The story of St Cecilia is merely a warm up (sorry!) to the gorefest depicted in many of the other frescoes. How about this one of saints Bibiana, John and Paul? 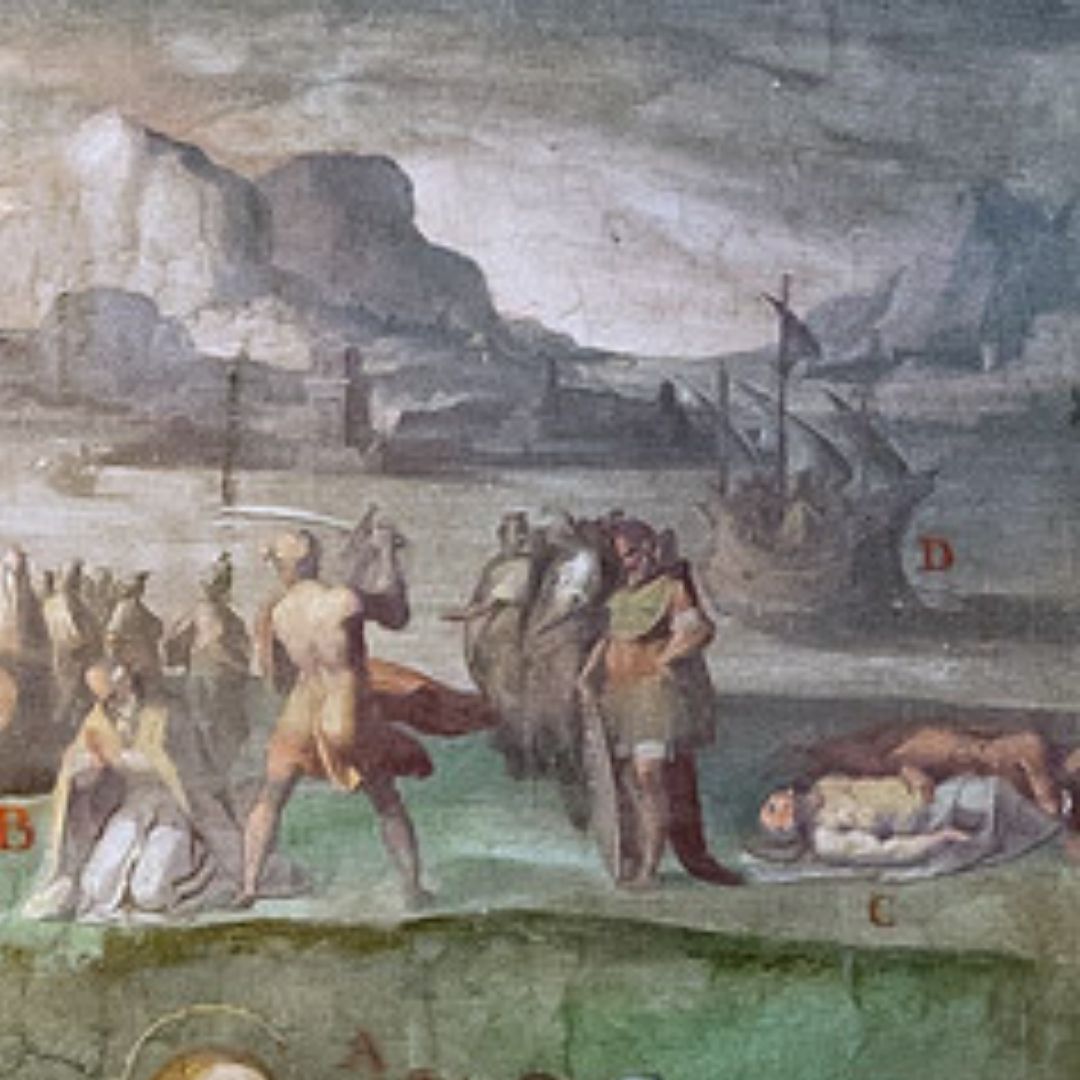 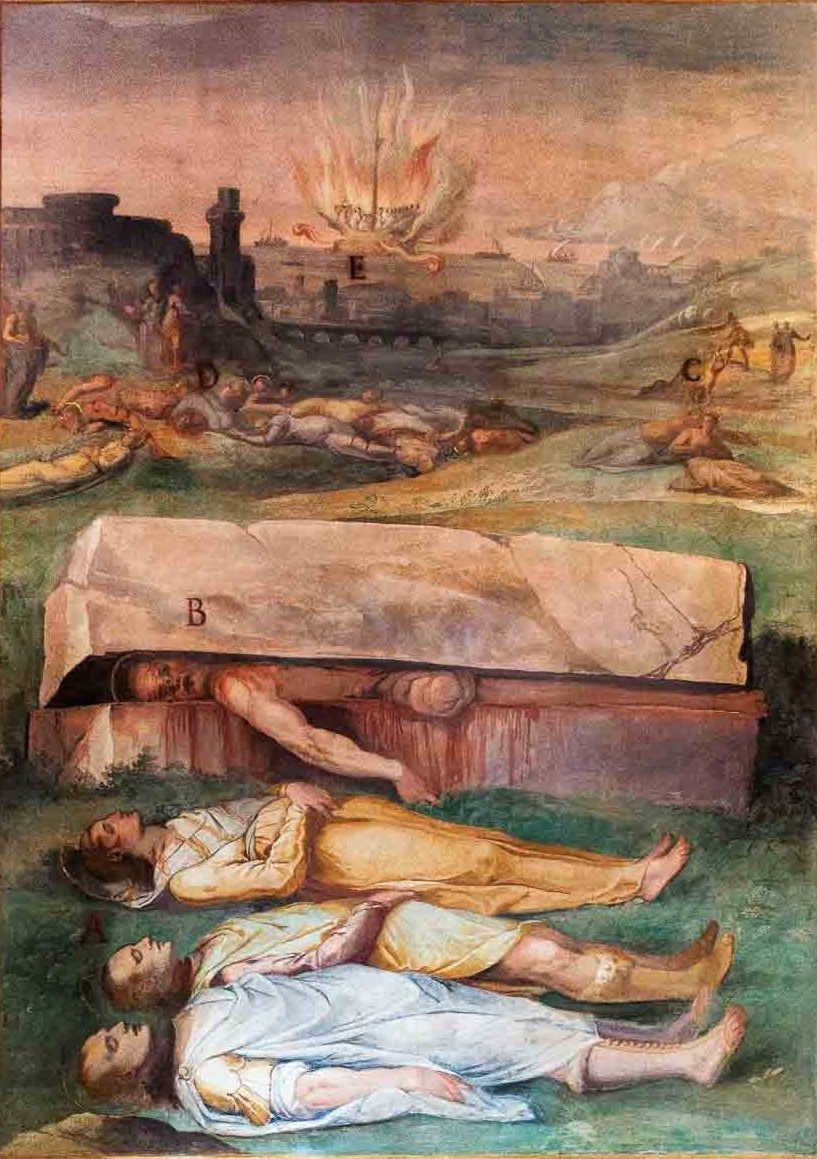 In the foreground, we see 3 dead saints on the ground and we know this because they have halos, there’s another saintly personage getting crushed, I was going to say to death but I feel he’s already a gonner (or at least I hope he is) and then in the background are heaps of cadavers and a burning ship with a cross that you can just about make out through the flames.

Many of the frescoes have similar scenes of genocide in the background which I think is meant to suggest the huge number of Christians that fell foul to the pagan regime and the number that were giving their lives for the cause during the Catholic Revival. It’s propaganda folks, but not as we know it.

But to the four in the foreground. The three on the grass in a nice neat row are Saints John, Paul and Bibiana. They have been intertwined apocryphally for centuries but the story of Bibiana is actually separate to that of John and Paul.

John and Paul, however, share a hagiography. These two saints were brothers and officers of the Roman army in the days of the first Christian Emperor, Constantine. They happily served in his daughter’s house until both she and her father died and Julian became Emperor. Julian returned to the cult of idols and paganism. Sigh!

Emperor Julian asked John and Paul to return to active service, they said ‘no thanks’ and they were decapitated secretly in their own garden to avoid an outrage. Julian then instigated a rumour that they had been exiled which didn’t go down too well because pagans started to get possessed by demons. When the son of their murderer was also possessed, the soldier went and prayed at their tomb at which point the demons fled his son’s body and he subsequently and unsurprisingly converted to Christianity, and wrote the story. Hurrah!

So who actually noticed that their heads have been severed from their bodies???

Before we get to squashed man, let’s talk about Bibiana. You might notice that squashed man’s eyes are quite literally popping out of his head looking at her but despite the best efforts of a very cruel lady, Bibiana remained a virgin when she was martyred. 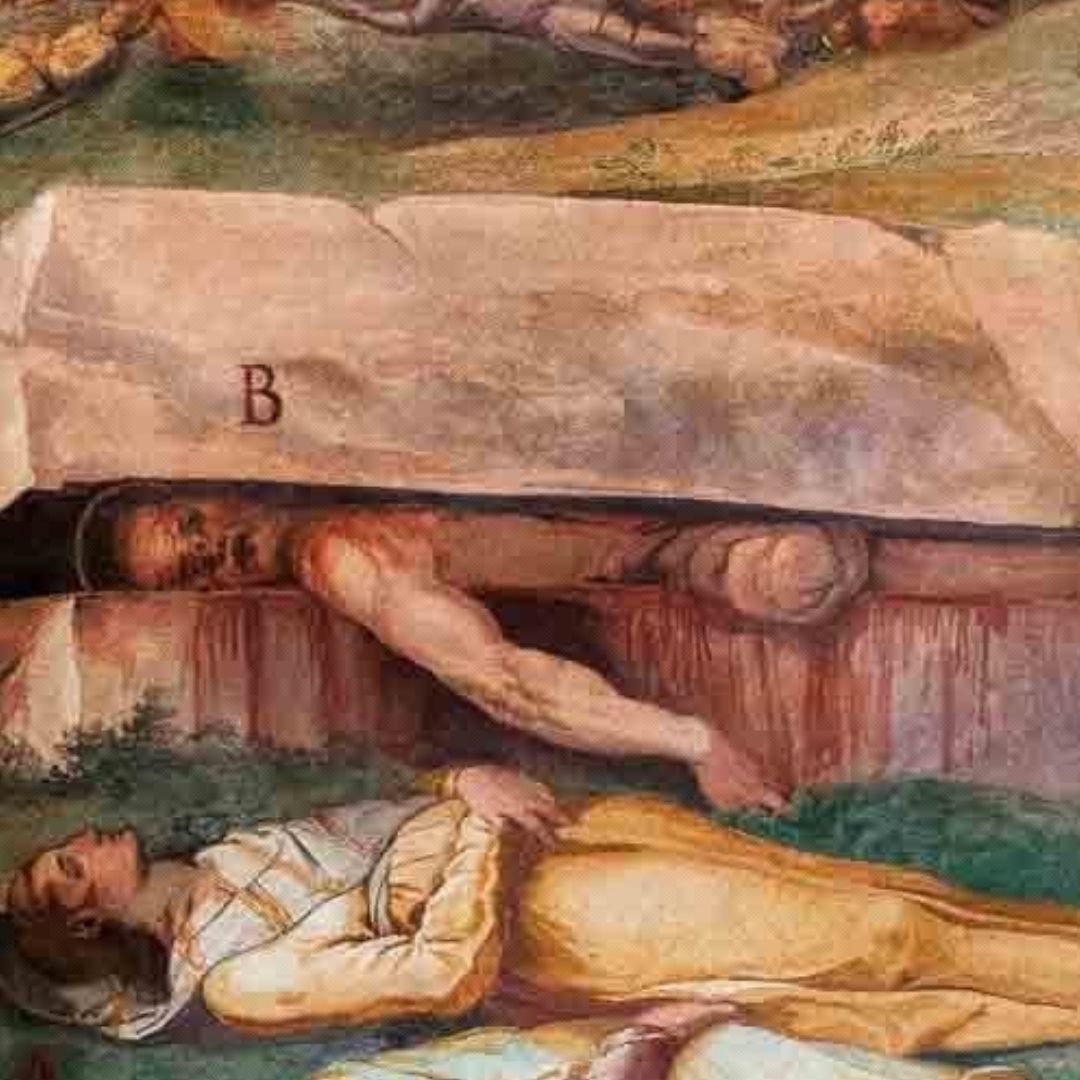 There are two versions of the Bibiana myth; in both she’s the daughter of Christian parents and persecuted by Julian the Apostate hence the connection to John and Paul.

In the first myth Julian banishes her father, and her mother and sister subsequently die of natural causes and are buried in their house (under the floor boards?!) by Bibiana. Bibiana herself is subject to torture before she passes away. A couple of days later she’s laid to rest with her mother and sister by a priest called John (St John?) and the house was eventually consecrated as a church. It’s the site of St Bibiana in Rome.

In the other version, the two sisters survive their parents and are stripped of all their possessions. They don’t mind too much as they spend their days in fasting and prayer. Really peeved that hunger and deprivation had absolutely no effect on them, the Roman Governor summons them, and it is at this point that Bibiana’s sister falls down dead.

Bibiana, however, is tortured in this account as well. She’s held captive by a wicked woman called Rufina, who in tries to defile her virginity firstly by seductive persuasion and then by violence but that doesn’t work (I’m not sure what didn’t work or how it didn’t work but she remained a virgin). Enraged, the Roman governor ordered her to be tied to a pillar and flogged which was a torture that she endured with a smile on her face until she died.

Her body was then put in the open air to be torn apart by wild animals, but as you can see she was left intact and finally buried.

So who is pop-eye?  He’s Artemius, a Roman soldier also martyred under the reign of Julian the Apostate. He was renowned for his ability to cure maladies relating to the spine and testicles. Why has he suffered the indignity here of getting pulverised under a huge rock? Maybe to show a bit of immediacy; the fact that his bowels are spewing out and that his eyes have indeed popped out of head under the weight of the rock is meant to be a visceral reminder that the struggle was not yet over. Nice.

The video of the episode on St Cecilia can be viewed here.

The video of the episode on Saints Bibiana, John and Paul can be viewed here.

To view the entire ‘Elevenses with Lynne’ archive, head to the Free Art Videos page.