We’re going to spend the next weeks doing a deep dive under the very murky covers of Hogarth’s extremely famous series of images, collectively called Marriage a la Mode. 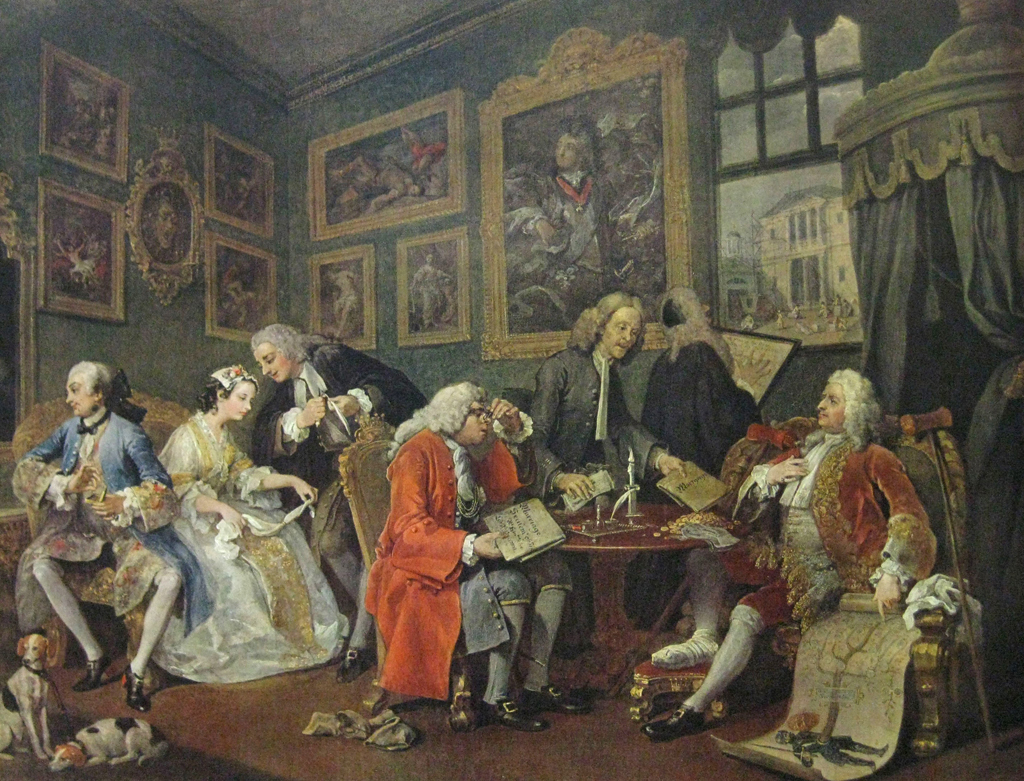 We start here in this rather claustrophobic and cluttered bedroom. How do we know it’s a bedroom? The piece of canopied furniture in the top right is a bed. The bedroom as a very private space is a relatively new concept which is lucky because Earl Squanderfield has invited quite a number of people in to a) witness it’s opulence and b) for a rather important negotiation.

I know what you’re thinking at this stage. You’re wondering how I know that this guy is called Earl Squanderfield?

Hogarth created these images to be engraved so they came with captions. 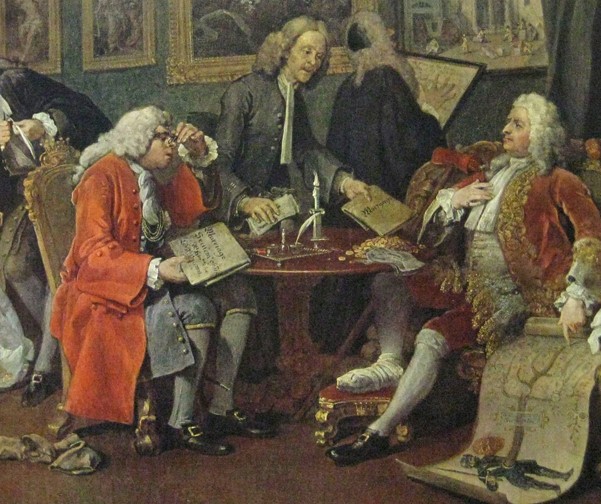 Let’s look at this negotiation. There’s quite a lot of money on that table, all heading in the Earl’s direction and presided over by a very keen eyed, slender gentleman who is presumably helping to broker the deal. Evidently it’s going well because the burning candle indicates that the documents are about to be sealed with hot wax.

We know that the money belongs or belonged to the man on the left because there’s an almost empty bag at his feet with just a couple of coins spilling out – it seems they’re all that’s left! It’s a good dowry. Is the Alderman willing to pay because his daughter is absolutely besotted with his son and vice versa? Erm, looking at them I don’t think so. They couldn’t seem less interested in each other if they tried. The reason for his willingness to part with a significant amount of cash is Squanderfield’s lineage.

Squanderfield gestures himself with one hand and with the other he’s pointing at a rather comical version of a family tree in which an entire tree appears to have grown out of the stomach of William the Conqueror, or at least a medieval knight. A piece of nonsense? Definitely! But the message is clear. One family have the title, the other the money – match made in heaven. Or not. 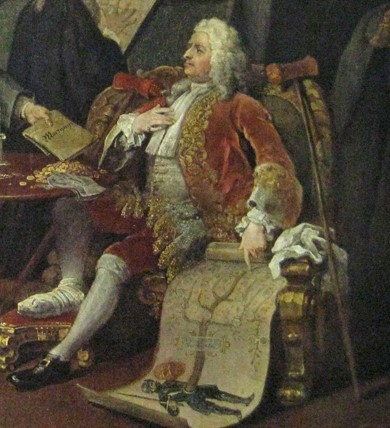 At this point you may be thinking well, that’s all fine regarding the title but Squanderfield seems to be doing well for himself too. You don’t get gout (which is what the bandaged foot and crutches tell us he’s suffering with) on a vegan, teetotal diet. For that you generally need rich, expensive food and alcohol. Plus, he has a bed that is sumptuous enough to be shown off to illustrious guests and a lot of very fancy paintings on the wall, including a large self-portrait. 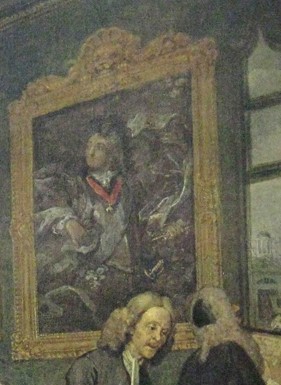 Let’s linger on that for a moment because it’s a great insight into Hogarth’s sense of humour.

He used to become particularly agitated on the subject of foreign portraitists who he felt dominated the genre in England to the detriment of English artists. I say English rather than British because Hogarth was known to sign works W Hogarth ‘Anglus’ (English). Van Loo a French portraitist was the favourite at the time so he’s borrowed his style and depicted the Earl wearing the French Order of Saint Esprit, or the Order of the Holy Ghost, a chivalric honour an Englishman could never have been awarded.

It’s hard to know whether Hogarth disliked foreign portraitists or painting portraits himself more. He called it ‘phiz-mongering’!

BUT there’s a clue to suggest that perhaps Squanderfield needs more money, and it’s not just in his name. The fellow looking out of the window is holding a document that has ‘a plan for the new building’ written across the top of it. The fancy building the architect is gazing towards is Squanderfield’s new house so he’s going to want huge sums of money; this marriage is most definitely also in his interest. 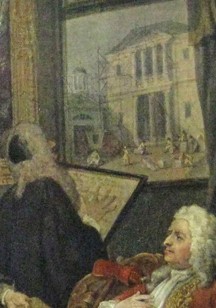 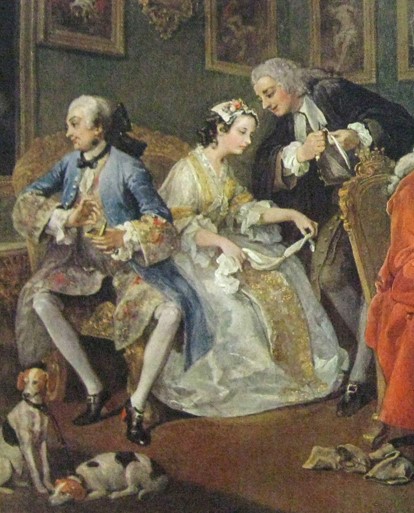 So we should feel sorry for this couple who are merely pawns in a game of wealth and status. The daughter certainly gets my sympathy here. She looks absolutely distraught, wringing her hanky whilst a smarmy looking lawyer called Silvertongue is paying her rather more attention than he should whilst perhaps trying to outline the benefits of this union which she knows she would do well to avoid (but doesn’t have the choice). Just look at her husband to be. He’s certainly impressed with himself even if she isn’t, and is gazing lovingly at his own reflection in the mirror as he takes a pinch of snuff. He’s all dressed up in the latest French fashions, and he even looks to have the French disease. Notice the black spot on his neck?

There may be trouble ahead.

The chained dogs (who can’t even look at each other) reflect that!

As an added extra, the images on the wall are all recognisable as famous works.

Do you think Hogarth had an artist’s crush on Titian?? Or was he snubbing him by putting him on the wall of such a vulgar fellow as with the Van Loo??